QE Unwind continues via the sharp drop in MBS.

In August, the Fed shed Mortgage Backed Securities (MBS) at a rate that exceeded its self-imposed “cap” of $20 billion for the fourth month in a row, but added some Treasury securities, with a new emphasis on short-term Treasury bills. 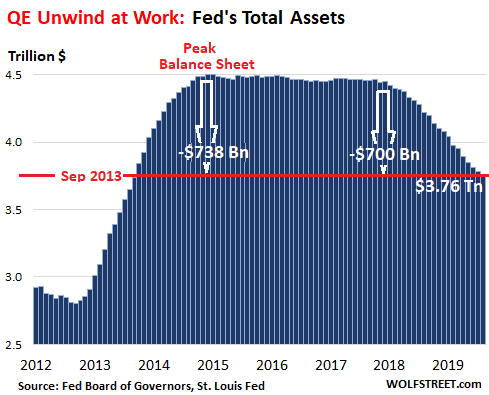 This was the first monthly increase since the end of 2017, bringing its Treasury holdings back to the level of last July, and just above the September 2013 level: 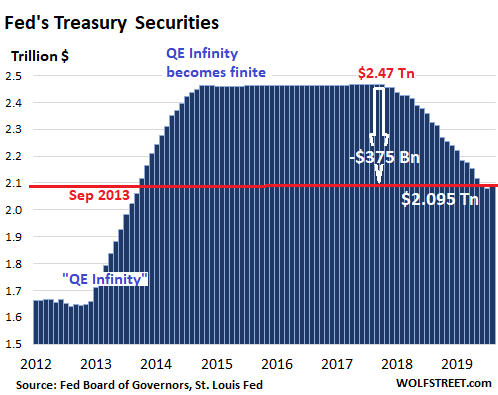 As part of its new regime to shorten the overall maturity of its holdings, the Fed’s holdings now include $3 billion in Treasury bills (maturing in one year or less), up from zero a few months ago.

After “Operation Twist,” which was layered between QE-2 and “QE Infinity,” the Fed had not held any Treasury bills. About four months ago, it started dabbling in them again, but in August it got serious. These T-bills replaced some of the MBS that ran off its balance sheet.

MBS run off exceeds “cap” for fourth month in a row

Over the last four months, the Fed has shed $94 billion in MBS, the fastest four-month pace ever and above the theoretical $80-billion cap for a four-month period. The sharper run-off of its MBS is in part responsible for the continued shrinkage of its total assets: 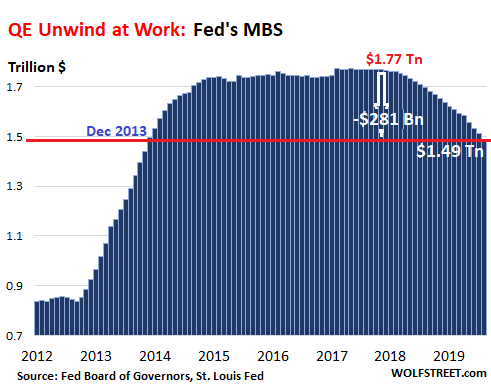 Holders of MBS receive pass-through principal payments as the underlying mortgages are paid down through monthly mortgage payments and are paid off when the home is sold or the mortgage is refinanced. Any remaining principal is paid off at maturity.

Currently, $1.41 trillion, or 94.6%, of the MBS that the Fed holds mature in 10 years or more, and the runoff is almost exclusively due to pass-through principal payments.

The drop in mortgage rates since November has triggered a surge in mortgage refinancings. And as homeowners paid off their old mortgages, the pass-through principal payments to holders of MBS surged as well. And it appears that the Fed is eager to get rid of these MBS.

It’s not getting rid of them because of credit risk. Credit risk of these MBS is not with the Fed, but with the federal government, since these MBS were issued and guaranteed by the government agency Ginnie Mae, or by the Government Sponsored Enterprises, Fannie Mae and Freddie Mac.

Instead, the Fed wants to get rid of its MBS because they’re cumbersome to deal with, in terms of conducting monetary policy. The Fed has also stated that by holding MBS, it is giving preferential treatment to housing debt over other forms of private-sector debt, and it expressed its desire to exit this business of assigning preferences.

If interest rates rise enough, mortgage refinancings will slow again, and the run-off of MBS will slow to a trickle. In this case, under its new regime, the Fed has indicated that it may sell MBS outright to keep the runoff process going.

In terms of the Fed’s overall assets, under the latest new-new regime announced at the July meeting, the runoff of its MBS holdings is supposed to be counter-balanced by the increase in its Treasury security holdings, including T-bills. So far, the increase in its Treasury holdings has fallen short of making up for the sharp drop in MBS holdings, and so the QE unwind continued in August, but at a slower pace than before.