Freight shipments within the US by all modes of transportation – truck, rail, air, and barge – fell 5.9% in July 2019, compared to July 2018, the eighth month in a row of year-over-year declines, according to the Cass Freight Index for Shipments, which tracks shipments of consumer and industrial goods but not of bulk commodities such as grains. This decline along with the 6.0% drop in May were the steepest year-over-year declines in freight shipments since the Financial Crisis:

In terms of shipment volume, the year 2018 was a historic outlier boom, far above all prior years. Now the Cass Freight Index has fallen back to the levels of the prior boom year, 2014, but remains higher than it had been in July 2015, 2016, and 2017.

In its report, Cass adds some items on its worry list that are not reflected in the Cass Freight Index, including “severe declines in international airfreight volumes (especially in Asia)” and “the ongoing swoon in railroad volumes, especially in auto and building materials.”

In the chart below of the Cass Freight Index for Shipments, the red line indicates shipment volumes in 2019 through July. The green line denotes 2014. What this shows is that 2018 was an immense party before dropping off in November and December, and that 2019 is a nasty hangover and a painful return back into the sober range: 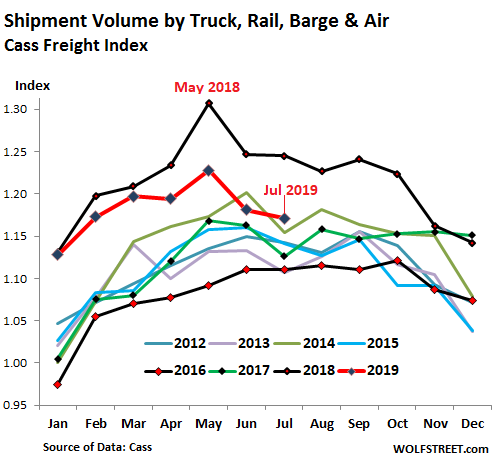 Railroad freight traffic fell 5.5% in July, compared to July last year, according to the Association of American Railroads (AAR), with carloads (commodities, motor vehicles, etc.) dropping 4.8% and intermodal (containers hauled by truck or ship and then transferred to rail, or semi-truck trailers that piggyback on special rail cars) dropping 6.1%.

Only six of the 20 carload commodities categories showed gains compared to July last year, with the biggest, petroleum & petroleum products, surging 11.5% as a result of the US shale-oil production boom.

The AAR blamed the 6.1% decline in intermodal on the trade issues since about 50% of the intermodal freight is a result of imports and exports, and “trade policy uncertainty continues to drag down this traffic segment.” For the first seven months of the year, intermodal fell 3.7%.

The total amount shippers – industrial companies, retailers, wholesalers, etc. – spent on freight by all modes of transportation, is a function of shipment volume, freight rates, and fuels surcharges. And it ticked down 1.4% from July last year, according to the Cass Freight Index for Expenditures. This was only the second tiny year-over-year decline since December 2016, the end of the last Transportation Recession: 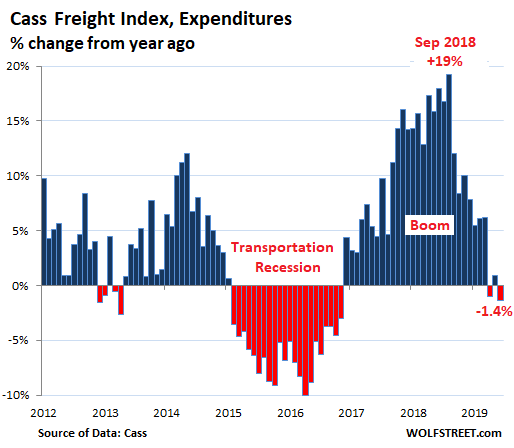 During the phenomenal boom in freight shipments and freight rates in 2018, total freight expenditures peaked with a year-over-year spike of 19% in September 2018, as shippers were complaining in their earnings reports left and right about surging transportation costs. By July, the Freight Expenditures Index barely backed off from last year and remained 16.3% higher than in July 2017 (red line, black markers) and higher than the prior record year, 2014 (purple line): 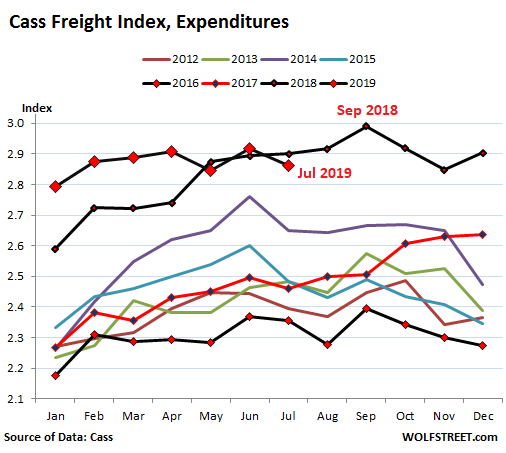 Railroads and large trucking companies have tried to maintain their revenues by nudging up contract rates where they can, or at least resist pressures to cut them. And they were also supported by the long-term nature of contract rates negotiated previously.

But even contract rates have started to fall. In July, the national average contract rate for van trailers fell 9% to $2.18 per mile, according to DAT Solutions, the largest truckload freight marketplace in the US.

But the trucking spot market has reacted sharply to the pressures created by surging capacity due to record orders of Class-8 trucks in 2018 that have been delivered in recent months, and by the decline in shipments. Rising capacity and declining demand are a toxic mix for spot market rates.

This weakening pricing environment – a godsend for shippers that griped all last year about being taking to the cleaners by their surging shipping costs – has been showing up in the intermodal segment. The Cass Intermodal Price Index, which had surged by the double digits last year, has now largely given up those gains. In July 2019, it was still up 1.5% from July 2018. But that compares to a 12% year-over-year gain in July 2018. The index has dropped 7% from the peak in March: 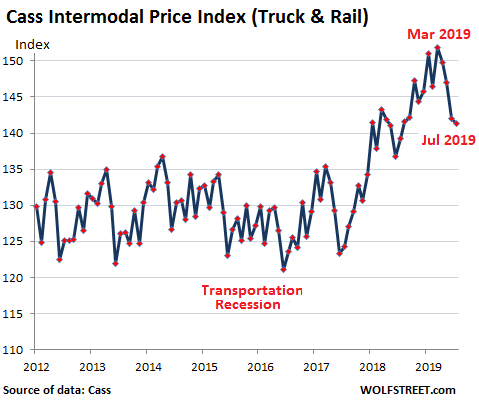 The record order backlog from 2018 is still feeding truck makers, but time is running out. Read…  Heavy-Truck Orders Collapse Stunning 81%. Lowest Since 2010