Nope, the Fed dumped. But there was huge demand elsewhere.

The US Gross National Debt has jumped by $363 billion in the two weeks since President Trump signed the law that suspended the debt ceiling. This surge pushed the total debt to $22.39 trillion. That’s up by $1.01 trillion from 12 months ago. And these are the good times. Watch this debt balloon during an economic downturn! Whoopee!  Note the technical term at the top right of the chart: 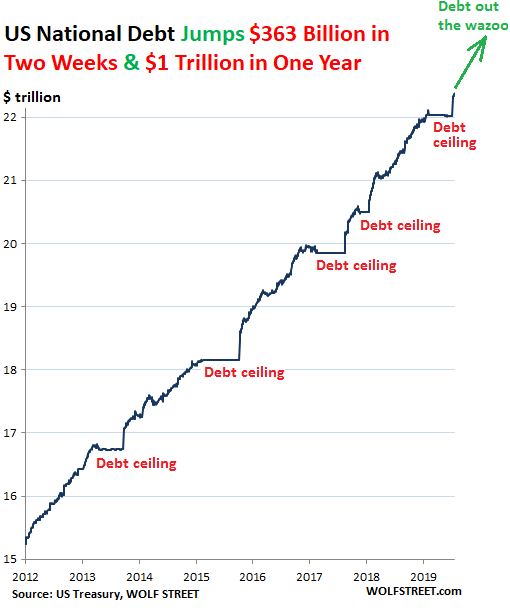 The question, “Who the heck is buying all this debt” – because every dime has to be bought by some entity – is becoming increasingly nerve-wracking, particularly as the trade war with China puts the possibility out there that Chinese entities might dump their US Treasury securities, much like Russia has already done. But Russia was only a small-ish holder. China is – or rather was – the largest one.

So we got some answers on Thursday when the Treasury Department disclosed in its TIC data how much of this debt was held, bought, and dumped by foreign investors through June.

Foreign investors bought hand-over-fist. But not the Chinese!

All foreign investors combined – so “foreign official” holders, such as central banks, and foreign private-sector investors such as banks and Mexican billionaires – held $6.64 trillion in US Treasury bonds and bills, having raised their holdings in the month of June by $97 billion, and over the 12-month period by $411 billion, all of it driven by frantic buying over the past seven months.

In dollar terms, this $6.64 trillion held by foreign investors is a record (blue line). In terms of the percentage share (red line) of total debt, it’s a far cry from the record maintained from July 2012 through May 2015, when it maxed out at 34.1% of total Treasury debt. The share dropped to 28.5% at the end of last year. Under the recent surge in buying, it has ticked up to 30.1%: 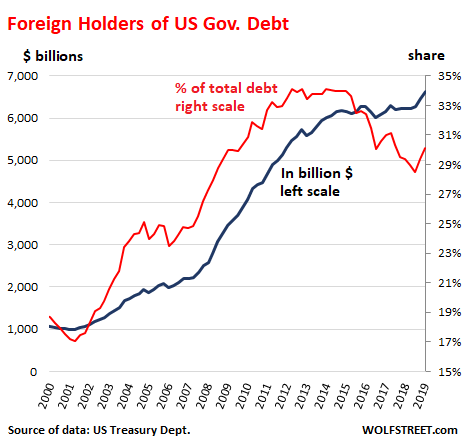 About $5.9 trillion of US Treasury securities are held by various funds administered by the US Government, including the Social Security Trust Fund and pension funds for government employees and military personnel. This “debt held internally” is an asset that belongs to the beneficiaries of those funds and is a true debt of the US government. In terms of the funds, they invested their beneficiaries’ money in what is generally considered one of the most conservative investments in the world, US Treasury securities.

But those $5.9 trillion in Treasury securities are not traded in the market and thus are free from the moment-by-moment price fluctuations of marketable securities.

The chart below shows those three big groups of holders of US Treasury securities through June: US government-administered funds, such as the Social Security Trust Fund and US government pension funds (gray), US individuals and entities other than the government (red), and foreign holders (blue): 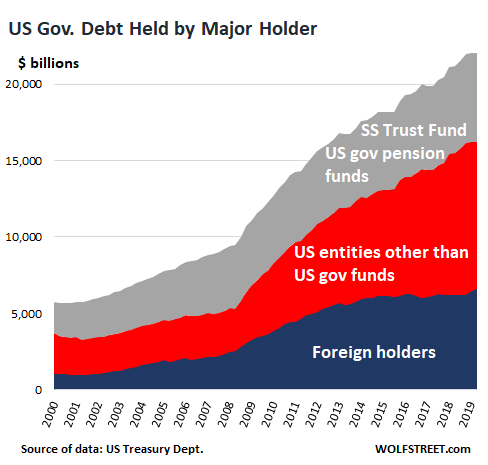 China had been the largest foreign creditor of the US, but it has shed $66 billion in Treasuries over the 12 months through June, and with holdings of $1.11 trillion, dropped to second position, behind Japan.

Japan became once again the largest foreign creditor of the US, having added $92 billion in Treasury securities to its holdings over the 12 months, driven by an 8-month buying binge starting in November totaling $104 billion. Its holdings now at $1.12 trillion are still down from the $1.24 trillion at the peak 2014: 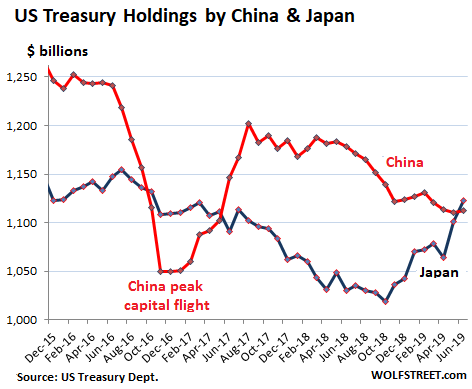 The importance of Japan and China as creditors to the US has been diminishing for years, as their combined holdings have fallen while the US gross national debt has ballooned. But the recent buying binge by Japan brought the combined share from 9.9% late last year to 10.1% in June: 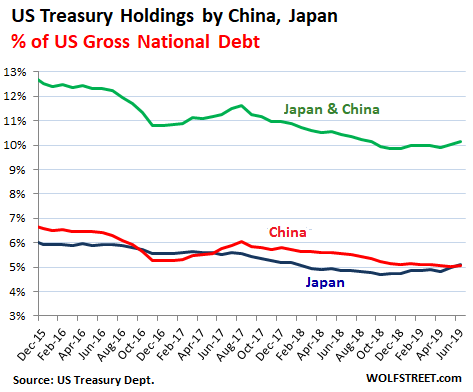 No country comes close to Japan and China. The third largest foreign holder is the UK with $341 billion in Treasuries, followed by a gaggle of others. Most of the entries in the list are tax havens for corporate or individual entities. Belgium is home to Euroclear, which handles large amounts in fiduciary accounts (in parenthesis, Treasury holdings in June 2018):

Other than foreign investors, who else is there?

The TIC data covered holdings through June. So over the 12-month period through June, the US gross national debt, having bumped into the debt ceiling in January, remained stuck at $22.0 trillion, up $828 billion from a year earlier.

Foreign investors, as we have seen above, bought $411 billion of this new debt. Leaves $417 billion that other non-foreign entities must have bought.

Not the Fed. It got rid of $265 billion in Treasury securities over the 12 months, reducing its holdings to $2.1 trillion at the end of June.

So other US entities must have bought the $265 billion the Fed dumped, plus the $417 billion in new debt that foreign entities did not buy, for a total of $682 billion. But who?

US government entities bought $106 billion in Treasury securities over the 12 months, bringing their total holdings to $5.83 trillion. This “debt held internally,” when seen from the other side, are assets in funds such as the Social Security Trust Fund and government pension funds.

So over those 12 months, the government added $828 billion to its debt. Foreign investors bought $411 billion of it; the Fed dumped $265 billion; and US government funds acquired $106 billion. Leaves $576 billion that someone must have bought. Who?

The only one left.

Other large US institutional holders include bond funds, pension funds, hedge funds, businesses with cash balances that they don’t want to keep in a bank, and private equity firms sitting on their “dry powder.” Individuals are also large holders, via their accounts at Treasury or at their broker. All combined, American institutions and individuals held 34% of the US gross national debt.

Data destroys the myth of tariffs being a “tax on consumers.” Here is where inflation runs hot – and it’s not imported consumer goods. Read... Inflation Data Shows Tariffs Are Not a Tax on Consumers but on Foreign & US Corporations

94 comments for “US National Debt Spiked $363 billion in Two Weeks, $1 Trillion in 12 months. But Who Bought This Pile of Treasury Securities?”