It’s homeowners and the pros – the homebuilders. Yesterday, we got data on sales by homeowners: Despite plunging mortgage rates and ample inventory, sales fell for the 16th month in a row, but prices rose to a new record. After surging 52% in seven years, prices are too high and are hitting demand. Today, we got data on sales of new houses by homebuilders: They’ve chopped their prices to the lowest levels in years to prop up sales, as they’re loaded with inventory that they have to sell because that’s how they make their living.

According to the Commerce Department this morning, the median price of new single-family houses ticked down from a year ago to $310,400 in June – below the median price first seen in November 2015, and down nearly 10% from the peak in December 2017: 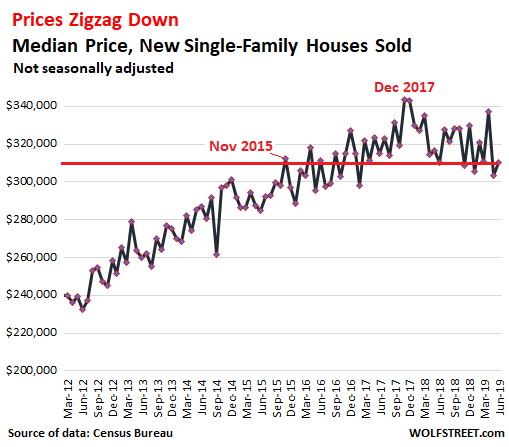 The price drop starting in December 2017 was the sharpest since Housing Bust 1. But these price changes do not include incentives – the free countertop upgrades, etc. – that homebuilders throw in to make deals. And these lower prices, and whatever incentives homebuilders threw in brought out the buyers – not en masse, as it was hoped after the plunge in sales that started in mid-2018, as mortgage rates had risen to painful levels, but enough to reverse part of the slump.

This new-house price data, produced jointly by the Census Bureau and the Department of Housing and Urban Development, is volatile on a month-to-month basis. The three-month moving average irons out some of the volatility and shows the price trends more clearly: 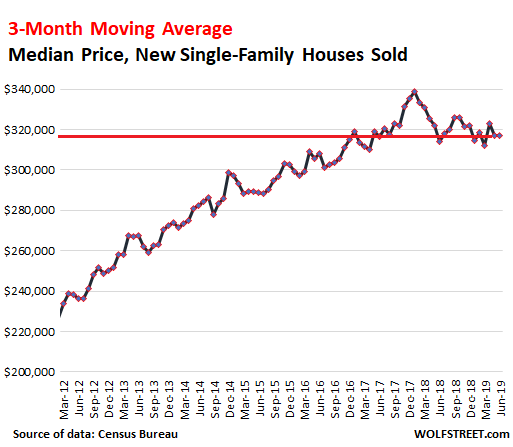 The current price declines of around 10% from peak through June pale compared to the brutal Housing Bust 1 from early 2007 through 2011, when the median price dropped 22% peak-to-trough, before zigzagging higher again. From the range in 2011 and 2012 through the peak in December 2017, the median price of new houses surged by about 55%. This peak was 31% above the crazy peak of Housing Bubble 1 in March 2007. But prices have hit a ceiling: 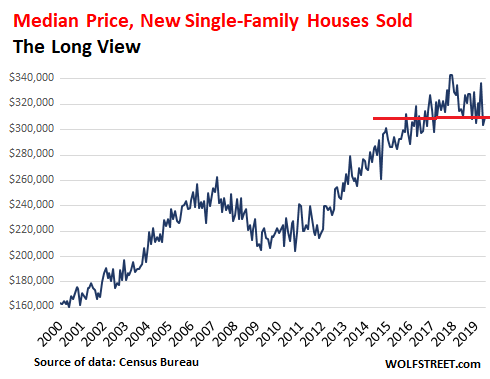 Homebuilders have to move their speculative inventory. So they’re making deals at lower prices, and they’re also shifting some of their building activity to houses with lower price points. This strategy, along with much lower mortgage rates, had a salubrious impact on sales volume. 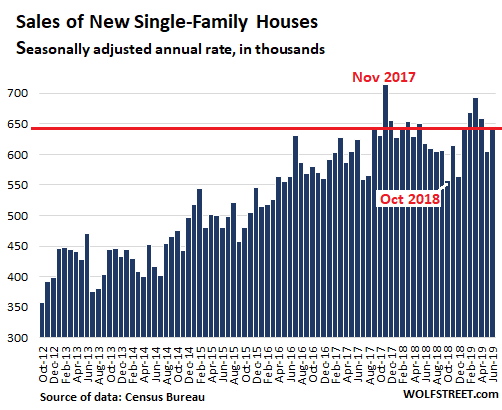 The relationship between prices and sales. To get a better sense of the trends beyond the month-to-month volatility, I converted median prices and sales into three-month moving averages, and overlaid them into one chart below (sales volume = blue columns, left scale; median prices = red line, right scale). It shows how the sharp drop in sales that started in early 2018 was stopped and partially reversed by significantly lower prices. But sales volume is now back on the decline, likely leading to further downward price pressures: 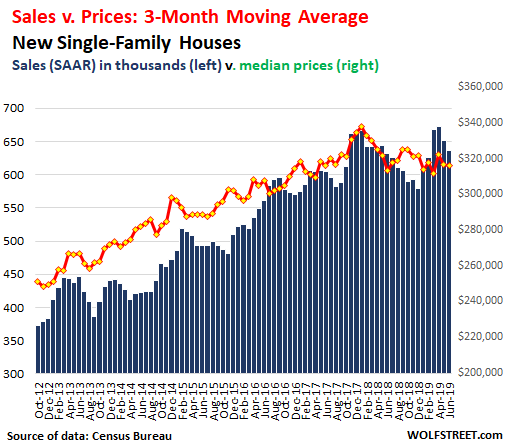 Supply of new houses for sale started to rise on a year-over-year basis in January 2018 and has risen every month since then. In June, there were 338,000 houses for sales. This was up 4.6% from June last year. At the current rate of sales, this amounts to 6.3 months of supply. Four months’ supply would be more than enough. And 6.3 months is the level supply suddenly shot up to at the beginning of Housing Bust 1 in June 2006. If it doesn’t rise further, it’s not a crisis level, but it puts pressure on homebuilders to get busy cutting prices and making deals: 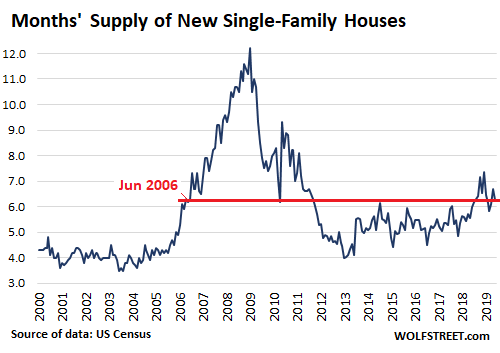 Homebuilders, unlike homeowners, have no illusions. It’s all about building and selling homes, and making a profit doing it. When they build speculative houses in a tough market, they cannot just sit on them and wait for the market to get better. They have to sell their inventory. This might take some time, but they will do whatever it takes to move those properties – not panic-selling, but making deals where the buyers are. And those buyers are at lower price points.

64 comments for “Up to Their Neck in Inventory, Homebuilders Cut Prices to November 2015 Level to Boost Sales”