Oh dear, Vancouver, Calgary, Edmonton, and Winnipeg. But there are some warm-spots too.

June is generally a strong month for house prices in Canada, according to the Teranet-National Bank House Price Index. But this June, the index rose only 0.8% from May, compared to an average June increase of 1.2%. Once those “seasonal pressures” are removed from the index via seasonal adjustments, “the composite index would have retreated 0.4% in May and 0.5% in June,” the report said. Particular weak spots were Vancouver, Calgary, and Edmonton. But there were some warm-spots too.

Just based on seasonality, house prices should have risen in Greater Vancouver, which was until mid-2018 one of the most splendid housing bubbles in the world, where house prices had more than quadrupled in 16 years. But instead, they declined in June for the 11th month in a row, according to the June Teranet-National Bank House Price Index. The index is now down 5.2% from the peak in July 2018, the sharpest 11-month decline since Aug 2009: 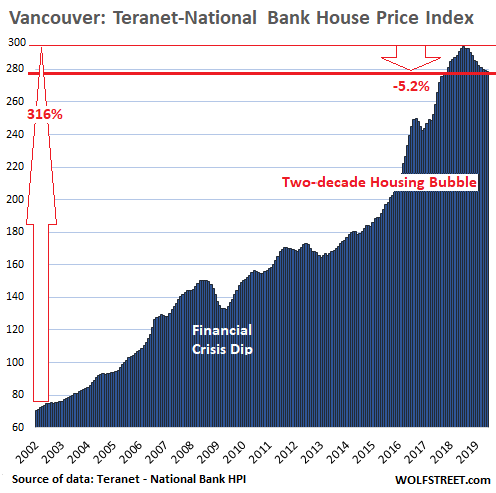 The Teranet-National Bank House Price Index is a kinder-gentler version of other home price indices, moving with a delay and in smaller increments as it operates on a different principle and isn’t impacted by changes in mix or big outliers that other indices are subject to. It tracks single-family house prices, based on “sales pairs,” comparing the sales price of a house in the current month to the price when the same house sold most recently, often years earlier.

Other indices for Vancouver are not so kind and gentle. For example, for the City of Vancouver, the MLS Home Price Index for detached houses plunged 17% from the peak in March 2016: 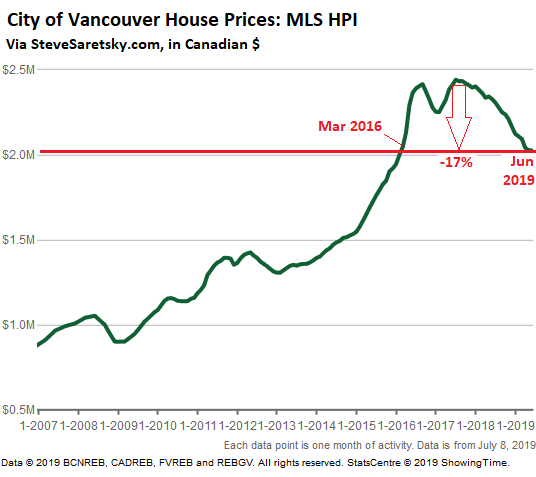 In the Greater Toronto Area (GTA), house prices more than tripled over the 15 years from January 2002 through the peak in July 2017, with the index soaring 218%. While this is a huge mind-blowing increase for a 15-year period, it can’t compete with Vancouver’s 316% increase.

In June, house prices in the GTA rose 1.3% from May, according to the Teranet-National Bank House Price Index. Last year in June, prices had risen 1.2%. But both increases were dwarfed by big seasonal jumps in June in prior years. The index remains down 2.1% from the peak in July 2017.

All charts here are on the same scale to give a sense of perspective of how big the house price increases were in each metro. Hence, Toronto’s chart shows more white space than Vancouver’s chart: 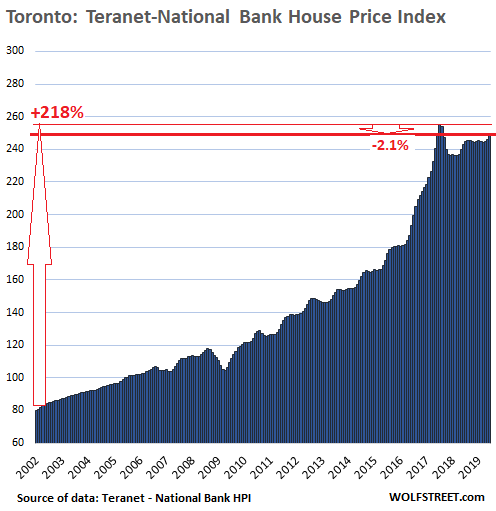 The Teranet-National Bank House Price Index for Victoria – which had more than tripled between January 2002 and the peak in September 2018 – jumped 2.1% in June from May but remains down 0.3% from the peak. The chart, which is on the same scale as Vancouver’s, shows the additional white space in comparison with Vancouver’s house price increases: 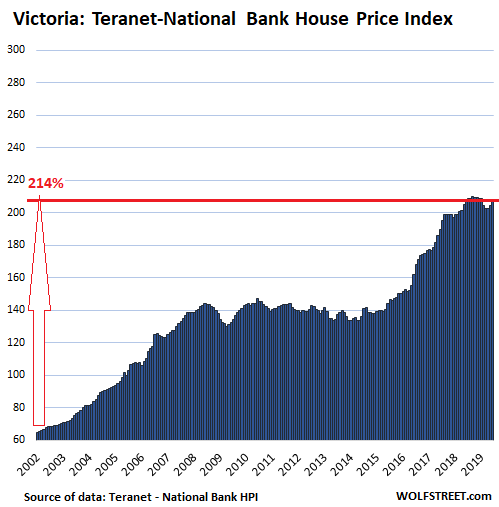 House prices in the Winnipeg metro area were essentially flat in June compared to May, according to the HPI. The index is down 3.5% from the peak in September 2018. This left the index where it had first been in October 2016.

In the Winnipeg metro – which isn’t about to run out of land to build on – house prices had almost tripled between January 2002 and the peak in September 2014. But then prices stalled and are up only 2.6% from where they’d first been in September 2014: 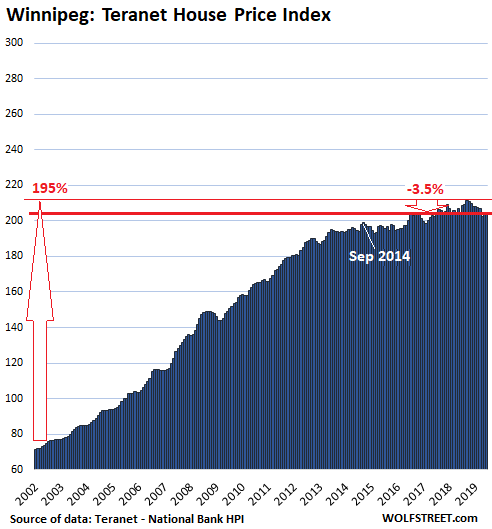 The HPI for the Quebec City metro rose 0.3% in June from May, just another small move in what has been essentially a six-year flat spot since June 2013, over which the index has gained only 2.9%, following a hot 160% gain in the prior 12 years: 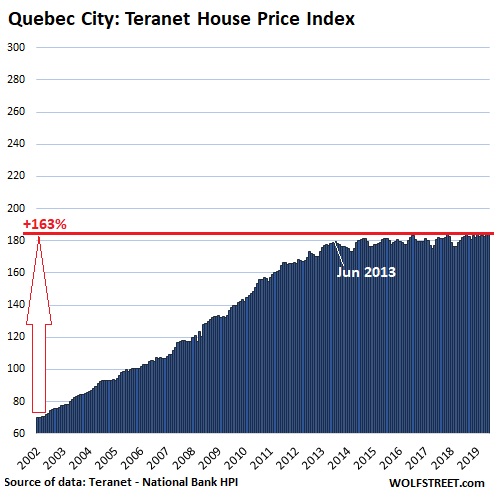 The HPI for the metropolitan area of Montreal rose 0.8% in June from May to a new record. The index has risen 162% over the past 16 years, ignoring the Financial Crisis without hiccup. A massive price buildup by most standards, that 16-year 162% gain was only about half of Vancouver’s 316% craziness over the same period; and so white space is beginning to fill the chart: 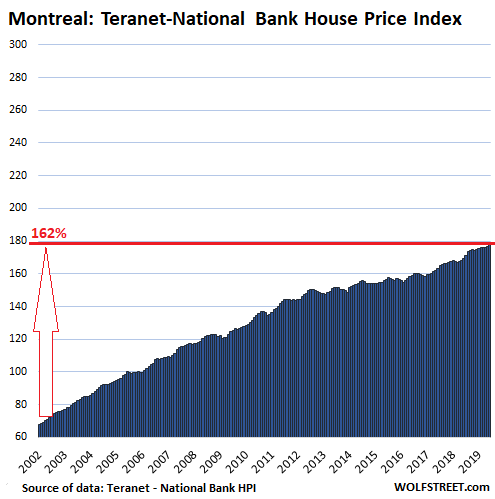 In Edmonton, the HPI for June remained flat compared to May and is down 6% from the peak 12 years ago in October 2007: 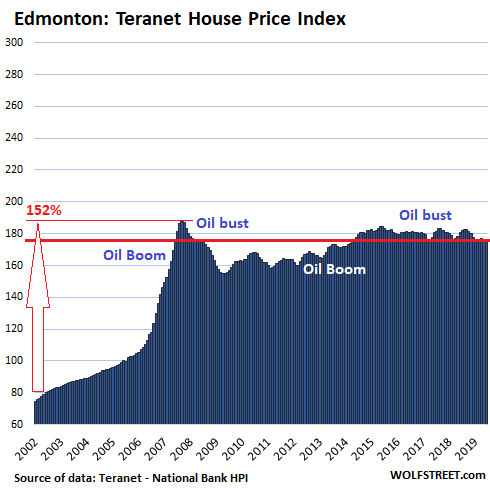 In Calgary, house prices ticked down a smidgen in June from May and remain down 7% from their peak in October 2014. The index is back where it had first been 12 years ago in July 2007: 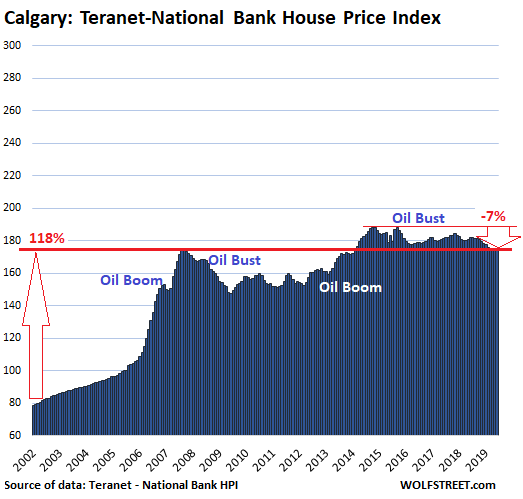 House prices in Ottawa rose 2.1% in June from May to a new record, and are up 6.5% from June last year. Since January 2002, the HPI has risen 111% — in other words, it has more than doubled in 17 years, and while that is a huge price surge by most standards outside Canada, it puts Ottawa on the lowest place on this list of splendid housing bubbles: 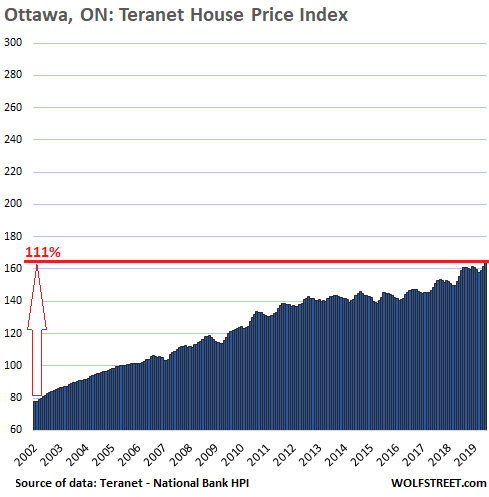 The home price declines in Vancouver are curing a housing crisis where middle-class households are priced out of a market, inflated by rampant international speculation and large-scale money laundering, says BC’s Finance Minister. Read…  Update on the Worsening Housing Bust in Vancouver, Canada: Spring Hopes Got Crushed