Tencent is a giant. Its stock, after plunging 50% in 2018, was a big winner earlier this year. Now the uptrend is broken. Revenue is primarily from mobile video game microtransactions, and warning signs are emerging.

Tencent is one of the top ten companies by stock market valuation worldwide, at around $441 billion. Its finances are a complex web, and its products are the backbone of urban Chinese digital life. It does this by leveraging its mobile gaming revenue into an IT behemoth of infrastructure and tech. Tencent dominates the Chinese gaming market with NetEase a distant 2nd (market cap of $31 billion), with a few other majors, and countless startups picking up the crumbs. 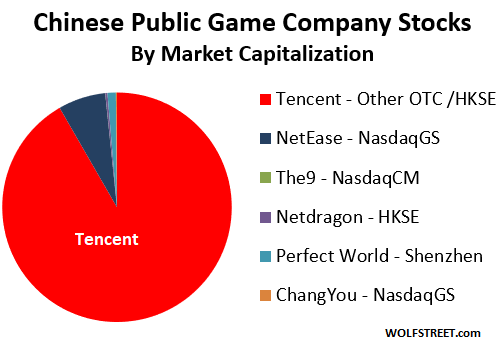 Video Games make up about 1.25% of global GDP and are the largest entertainment market worldwide. Gaming is important financially, particularly in Asian Stocks. Meanwhile, there are signs the mobile game revenue Tencent lives off of is slowing or retreating, leading to potential pain worldwide.

While it is tricky to calculate, gaming appears to represent around $500 billion in market cap in China, or about 10% of total market cap of Chinese stocks. Tencent alone accounts for about 9% of China’s stock market capitalization.

Earlier this year, when the Hong Kong stock market rose it was noticed that of the 16% rise in stock indexes this year, 88% of that rise was due to Tencent. Since then however, that bounce has faded by nearly 20%. The stock itself has been up and down since.

Tencent’s finances are difficult to tease out. It owns stakes in many smaller companies, including significant stakes in US companies, such as Snap, but particularly in China, such as Epic Games along with a number of other ventures. Tencent wholly or partially owns game companies  Grinding Gear Games (80%), Miniclip (undisclosed majority stake), Riot Games (100%), Epic Games (40%), Activision Blizzard (5%), Ubisoft (5%), Paradox Interactive (5%), and Supercell (84.3%).

That said, currently Tencent’s income is about 75% from (mostly Chinese) gaming – suggesting the Chinese stock rebound may be directly linked to China’s recent lift of the game ban (though frozen soon after) and renewed growth hope. The Chinese gaming market is unique in that the majority of its spending is microtransactions in games on smartphones, with a modest PC sector, largely closed to outsiders, and having strict internal requirements.

Any resurgent slowdown in growth or reversal in spending (like a renewed game ban, or an economic slowdown causing players to become a bit less willing to engage in microtransactions) could result in a significant hit to Tencent, and by extension, the Chinese stock market. Additionally, new requirements from state authorities are causing some approval issues.

Tencent’s current situation is compounded by unique Chinese dynamics. Its stock crashed nearly 50% in 2018. Imagine Google, Apple or Amazon doing the same! It has since retraced part of it — but is still 25% down from its 2018 high — driving the resurgence of Chinese and Hong Kong stocks. However, recently the uptrend has broken and Tencent’s 2019 Q1 earnings have been disappointing. Their Online Gaming Division seemed to be the source of trouble – with gaming sales actually down 1% year-over-year.  Tencent also recently spun off part of its music division via an offering of ADRs of Tencent Music in the US, which was not very successful.

Tencent also has a huge presence in the bond market. It sold $6 billion of notes earlier this year, bringing the total to over $26 billion in mostly dollar denominated debt.

Recently Tencent-owned Epic Games (Fortnite creator and Epic Game Store creator) had a fire sale in an effort to win over distrusting gamers, offering extreme discounts and eating the cost by still paying the developers the same price. However, this wasn’t exactly well received. Some developers were upset about an unapproved discount, and customers in general seemed to still stay away from the store – though Epic was likely losing money on the sales (to make it up in volume?).

Epic has quite a lot Fortnite cash to burn to get people onto the immature platform – but Fortnite’s popularity is waning with no known major new title in the works. And no in-house Tencent game is actually popular outside of China.

This push all seems to be part of Tencent’s efforts to gain market share outside of China, but with very limited success. Tencent doesn’t really make games these days, it monetizes them. But there is too much competition, and the pay-to-win mobile model that made Tencent’s billions is widely disliked abroad, and a much more open market in terms of game competition is failing to make much headway.

Meanwhile, all that gaming revenue is used to support other tech utilities. In Tencent’s case, WeChat is forming a growing portion of its revenue. WeChat, originally a chat application that has grown into a unified digital portal, basically forms the electronic basis of urban life in China – with an insane amount of touchpoints to other areas of the economy, such as payment systems, the communication grid, delivery services, reviews, and more. All of this is backed up by game spending. The PRC’s social credit score also draws heavily from gamification mechanics.

Tencent in particular seems to have a web of connections, and if its stock collapses again, or if it has to sell interest in studios to raise capital, it could have serious impact on the tech sector and financial markets.

If the market turns again on Tencent and they have layoffs like NetEase (up to 50% of some departments) or other major game companies, it could become a serious macroeconomic problem in the Chinese tech sector. Not just for the majors; there must be countless thousands of startups suffering and if they go under there are going to be significant ramifications. By Adam H. Williams, Senior Associate at E911-LBS, LBSglobe.com, for WOLF STREET

In the US, the reception of a bill in the Senate has been fascinating. Read…  US Senator Aims at Big Gaming, Tries to Ban “Loot Boxes” & “Pay-to-Win,” Puts $50 Billion in Revenues at Risk. Here’s How Gamers Reacted

49 comments for “Is Digital Bling Propping up China’s Stock Market?”