Bloodletting after record IPO Hype in 2018 of Chinese companies in the US.

There are about 300 Chinese companies that are traded in the US, either on exchanges or over the counter, either as American Depositary Receipts (ADRs) or as shares. And they’re just about all getting crushed, crushed, crushed.

Tencent Holdings, the conglomerate with holdings in social media, payments, video gaming, and tech: Its ADRs [TCEHY] have dropped 25% from the 52-week high and 33% from the peak in January 2018, to $40.86.

Sina Corp [SINA], an internet portal, plunged 5.9% on Friday and 37% so far in May. It’s down 67% from the top of the range it traded at in the January-March period of 2018. The shares have traded in the US since its IPO in March 2000, just as the dotcom bubble was starting to blow up. These shares are now down 70% from their all-time high in 2011.

Here are the four largest IPOs by Chinese companies in the US in 2018, and to what extent their shares have recently gotten crushed:

#4. Tencent Music Entertainment [TME], the music division of Tencent Holdings, has plunged 28% since April 2. In early December, days before the IPO, the IPO was still hyped as “hotly-anticipated.” But it wasn’t so hot. It took place at $13 per ADR, at the bottom of the range indicated, still extracting $1.1 billion from investors. The ADRs reached a high of $19.11 on March 18 and closed on Friday at $13.62, having plunged 29% from their peak.

There is an index that tracks US-traded ADRs by Chinese companies, the S&P/BNY Mellon China ADR Index. It closed on Friday at 500.1, down 29% from its peak in January 2018, and down 17% so far in May. The index is dominated by Alibaba’s ADRs. Note the plunge in May to below the level where it had been in April 2015 (data via Investing.com, Friday’s closing price via MarketWatch): 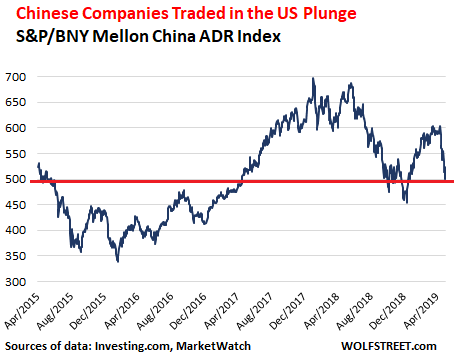 Clearly, all the razzmatazz about the US-China trade war, the “new cold war,” the “tech cold war,” and all the global entanglement around Huawei are not helpful. But there is a lot more to it.

SMIC, China’s largest semiconductor maker, said on Friday in a filing to the Hong Kong stock exchange, where its actual shares are listed, that it had notified the NYSE of its intention to apply on June 3 to delist its ADRs that are traded on the NYSE. The delisting is expected to happen after June 13, whereupon the ADRs will trade on the over-the-counter market, it said according to the South China Morning Post.

The company  cited low trading volumes of its ADRs and the high costs of maintaining the listing in the US and complying with reporting requirements and related laws in the US, according to the South China Morning Post – and these US reporting requirements and laws are of course precisely what are supposed to provide investors a modicum of protection against the biggest abuses and scams.