Seattle and Southern California are the big new-comers among the most expensive rental markets whose rents have turned south. In Chicago and Honolulu, apartment rents have plunged since 2015. San Francisco’s rental market had peaked in October 2015, and then rents fell, but in 2018, they started rising again, and now they’re back, or almost back, at their 2015 highs. New Nork City’s rents peaked in May 2016 and are now down by the double digits.

Los Angeles County, with a population of over 10 million, has been experiencing a net outflow of the labor force and employed people. Since the peak in November 2018, the county has lost 103,000 people in its labor force and 68,700 employed people, and California has begun to panic about losing businesses and people to other states.

In San Diego, the median 1-BR asking rent is down 9.7% from its peak in December 2018; and 2-BR rents are down 4.8%. Rents are also down by similar degrees in Santa Ana (Orange County) and Long Beach. More in the table below.

In San Francisco, the median asking rent for 1-BR apartments hit a new high, rising 6.3% from a year ago, to $3,720, barely breaking its old record set in October 2015 of $3,670. But 2-BR rents, at $4,800, remain below their October 2015 peak ($5,000). These dizzying rents give San Francisco the dubious title of being the city with the most ridiculously high median asking rents among large US cities. “Housing Crisis” is the local term for this honor.

In my handy-dandy table of the 16 most expensive major rental markets in the US, the shaded areas indicate peak rents and the changes since then. Los Angeles had long been the third most expensive rental market in the US, behind San Francisco and New York City. But in 2018, when rents were surging in Los Angeles, its 2-BR rents had briefly moved into second position ahead of New York City. With rents declining in LA, this has now been unwound. 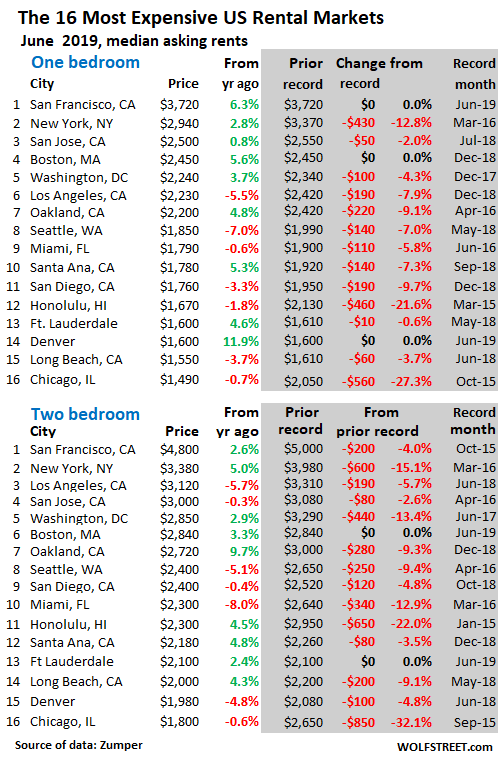 In Denver, the 1-BR market set a new record in June, with rents jumping nearly 12% year-over-year. But the 2-BR market seems to have hit a ceiling last year and is now down 4.8%, as perhaps more renters are priced out of this market and have to tough it out with less space in a 1-BR apartment.

In Honolulu, rents, after spiraling down since 2015, appear to have stabilized this year at about 22% below their peak levels.

The data is collected by Zumper from over 1 million active listings of apartments-for-rent in the 100 largest markets. This includes third-party listings received from Multiple Listings Service (MLS). Zumper releases this data monthly in its National Rent Report.

“Asking rent” is the amount the landlord advertises in the listing. It’s a measure of the current market, for people who are now looking to rent. It is not a measure of the rents that long-time tenants actually pay.

“Median asking rent” means that half of the advertised rents are higher, and half are lower. The data here is based only on apartment buildings and includes new construction, but it excludes single-family houses and condos for rent.

Excluded are rooms, efficiency apartments, and apartments with three or more bedrooms. Also excluded are incentives, such as “one month free” or “free parking for three months,” or whatever.

The Cities with the biggest percent rent increases:

Rents are still surging in some of the 100 major rental markets, with eight markets booking double-digit increases in median asking rents for 1-BR apartments compared to June last year:

And the Cities with the biggest percent rent declines:

In some cities the pendulum swung the other way. Here are the eight cities that in June booked the largest year-over-year declines in median asking rents for 1-BR apartments:

All this gets thrown into the same bucket and averaged out, and so nationally, the median asking rent for 1-BR apartments ticked up just 0.9% year-over-year; and for 2-BR apartments, it rose 1.9% to $1,220. There were the slowest year-over year increases since June 2017, and among the slowest increases in years.

Below is Zumper’s list of the top 100 most expensive major rental markets, in order of 1-BR asking rents in June, with year-over-year percent changes. You can use your browser’s search function to find a city. If you’re reading this on a smartphone, and it clips the right side of the table, hold your device in landscape position: