This is now everywhere in the Media. In San Francisco, it was on Radio this morning, a whole discussion on KQED’s Forum about California and Texas, with a good dose of California-bashing, and some Texas-bashing too. The fear is that business conditions and costs of living are driving businesses and people out of California. The panic here is over this question: What can California do to stem the outflow of businesses and people to Texas? At least that’s the official panic.

And there is suddenly some reason for this panic. According the latest data from the California Employment Development Department, the labor force (people who are either working or are actively looking for work) and the number of employed people declined two months in a row, April and May, to form a fairly steep dip, even on a seasonally adjusted bases as shown in the chart: 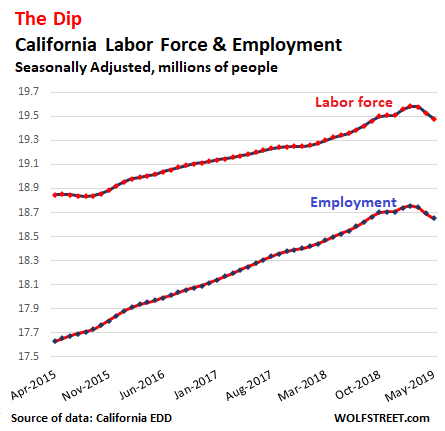 Given that the labor force and the number of working people shrank at about the same rate, the unemployment rate remained flat in May with February at 4.2%. So this is not a case of companies massively laying off people, but a case of people leaving the state, both employed and unemployed people.

California is nearly always ranked as one of the worst places to do business, and Texas as one of the best. For example, in its 2019 rankings, Chief Executive put Texas in first place and California in dead-last 50th place.

While these types of surveys are routinely brushed off as whining by spoiled-rotten CEOs, the dip in the labor force and employment are now causing some soul-searching here.

On Friday, it was Governor Gavin Newsom who came out swinging. “Every year, the executive magazines come out and say, ‘California is the worst place to do business, No. 50 in the nation,” he told the San Francisco Chronicle. “They say the best places are Tennessee and Texas … but if it’s all about (gross domestic product), we outperform everyone.” The state “is still the envy of the world,” he said.

“Some of the CEOs have never done better in their lifetime,” he said. “They made all their money here, and then move to Arizona before their IPO.”

Also on Friday, Newsom addressed the crowd of executives at the 2019 Pacific Summit in San Francisco: “We’re not going to be the cheapest place to do business, but you knew that 50 years ago,” he said. He mentioned some of the reforms. “We’re making progress, and I hope you’ll start focusing on that rather than the 13.3% damn tax rate.”

And yet California’s population has ballooned to nearly 40 million people, and housing is insufferably expensive. The term “Housing Crisis” is in common use in many cities, and there is a continuous flow of stories in the media about people who work at any of the tech companies in Silicon Valley or San Francisco or Southern California, often as contractors, who cannot afford housing, or don’t want to blow all their income on housing, and so they’re living in cars, vans, and RVs parked in endless rows on some streets.

Other people, who live in slightly less unaffordable areas face horrible commutes. In the Bay Area, these commutes also involve chokepoints in the form of bridges. These people leave their house before 5 a.m. to beat the rush, and since everyone is doing it, that’s when the rush starts.

About 21% of Americans live either in California (40 million) or in Texas (29 million). No other state comes close. Florida is third with a population of 21 million people (chart via Google Public Data Explorer): 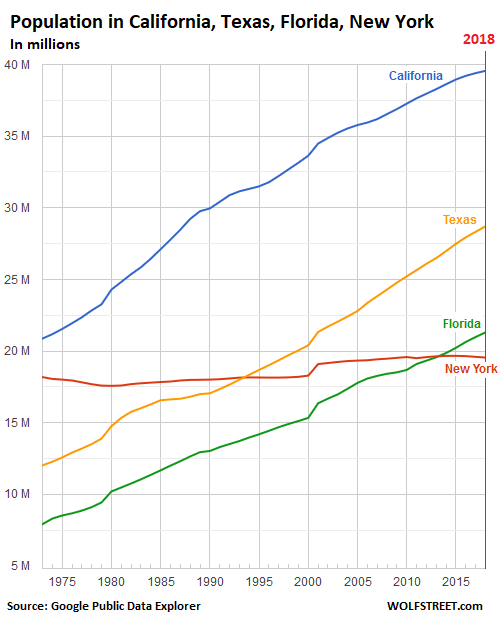 Alas, I just heard from my concerned friends in Texas. And they told me to spread the word here in California that Texas is full, and that the new go-to state is now North Dakota. Pooh-poohing California has become an election strategy by certain Republican candidates in Texas with a battle cry, “Don’t California My Texas,” which is now available on T-shirts.

In San Francisco and Silicon Valley, according to EDD’s not seasonally adjusted data, the jury is still out fretting. In the counties of San Francisco, San Mateo (northern part of Silicon Valley), and Santa Clara (southern part of Silicon Valley, South Bay), the labor force dropped from the peak in February by 31,100 to 2.09 million, with a very sharp drop in April, followed by an uptick in May, taking it back to August 2018 levels. The number of employed people fell by 19,000 to 2.05 million, also back to August 2018 levels. 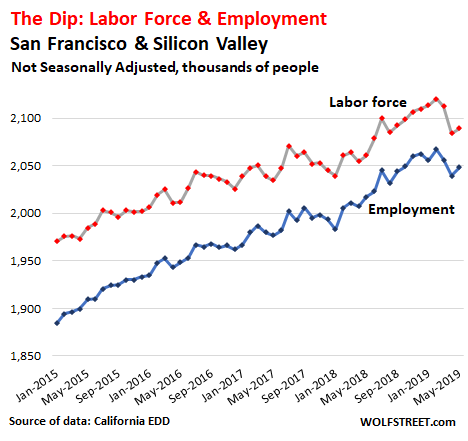 And since the labor force plunged more quickly, with people apparently heading for Texas or maybe North Dakota, the unemployment rate dropped to 1.8% in San Francisco and San Mateo, and to 2.1% in Santa Clara Country, all of them the lowest rates in the data as far as I can see. So this is not a case of companies laying off people – no, they’re still struggling to hire – but a case of people vanishing.

In Los Angeles County – with a population of 10.1 million, over a quarter of California lives there – the plunge started late last year: From the peak in November through May, the county lost 103,000 people in its labor force and 68,700 employed people. 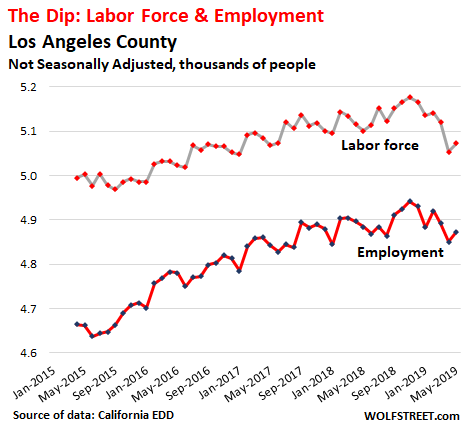 Because in Los Angeles too the labor force is shrinking faster than the number of employed people, the unemployment rate dropped to 3.9%.

For now, there are still hopes that the dreadfully shrinking labor force is just a statistical quirk or a seasonal factor. This could still be the case in the Bay Area. But in Los Angeles County, the data is strong and persistent enough to indicate that there is some kind of trend at work.

And Los Angeles might be the leading edge in this trend, with the Bay Area and other population centers following behind. And that’s what California’s officials and the entire housing industry and other industries are fretting about.

But this would be just what Californians who are buckling under housing costs and congestion are praying for: That this net-outflux might pick up some speed and make some room and take some pressure off the housing market and allow prices and rents to correct.

The Fed has already accomplished more with its verbiage this year than it had last time when it cut rates all the way to zero and did trillions of dollars of QE. My podcast…  THE WOLF STREET REPORT: Stealth Stimulus Has Arrived

236 comments for “California Panics about Losing Businesses and People (to Texas): What the Housing Market Fears Most is Cropping Up in the Data”