What to do with those messy banks ignites further tensions.

The Italia All Share Banks Index dropped 18% so far in May, almost double the 10% fall registered by the Euro Stoxx 600 banking index during the same period: 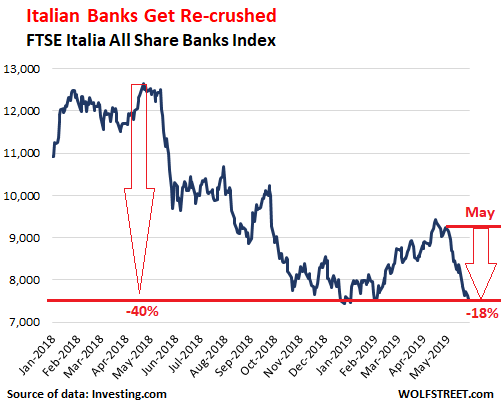 Italy’s biggest bank, Unicredit, saw its shares fall through the €10 level for the third time this year. The stock has lost 20% of its value in May, and is close to its all-time low, registered in July 2016 when Italy’s banking system was being shaken and stirred by the slow-motion collapse of then-third largest lender Monte dei Paschi di Siena (MPS). Unicredit’s shares are down 97% since the Italian banking-hype peak in May 2007.

MPS, now 68% state owned following a controversial taxpayer funded bailout in 2017, is already reverting to type. In the first quarter of this year its net profits slumped 85% to €27.9 million euros as shrinking revenues and larger write-downs on problem loans due to Italy’s weak economy took their toll. MPS’s shares, now at €1.07, are down 36% year to date and 78% since the bank’s shares were re-floated in October 2017 at the price of €4.76 a piece.

Ever since pouring €8 billion of public funds into MPS to stave off its collapse, the government’s “investment” has done nothing but lose value. Every now and then, a passing reference is made to the possibility of re-privatizing the bank, but in reality there are no interested buyers, partly because MPS’ balance sheet, still infested with non-performing loans (NPLs), keeps getting messier as the Italian economy stagnates, but also because there are no banks in Italy healthy enough to take on such a burden.

Mid-sized lender Banca Carige, which failed earlier this year and was temporarily propped up by the government, ran out of potential rescuers two week ago after asset management behemoth BlackRock, having seen what it would get into, walked away from the table. If Carige can’t find a last-minute buyer in the next few weeks, European bank supervisors say it should be closed. But that runs contrary to Rome’s plan for a state-funded rescue. And relations between Brussels and Rome could be about to get even more fraught.

Unicredit has its sights set on acquiring Germany’s second largest lender Commerzbank, but labor representatives on Commerzbank’s supervisory board have vowed to do whatever it takes to block the merger.

As for Italy’s second largest lender, Intesa Saopaolo, it is still trying to fully digest the two Veneto-based banks it picked up in a shotgun marriage in 2017. Intesa has seen its market cap plunge 20% in the last month and 40% since May 15, 2018, by which date the formation of the current heavily populist, big spending, anti-EU establishment coalition government had become a foregone certainty. Italy’s third and fourth largest lenders, Banco BPM and Unione di Banche Italiane, are also respectively down 31% and 20% in the last month and 45% and 47% since May 15.

One of the reasons for the latest deterioration is the ongoing, escalating standoff between Brussels and Rome over Italy’s 2019 budget and other matters. For the moment neither side shows any inclination to back down.

On Monday Italian Deputy Prime Minister Matteo Salvini, flush from La Lega’s victory in the European elections, said he now has a mandate to push through tax cuts and fight for changes to EU budget rules. Which went down like a lead balloon in Brussels, which hit back by threatening to fine Italy €4 billion over its rising debt and structural deficit levels.

Since then, Italy’s 10-year risk premium — the spread between Italian ten-year bond yields and their German counterparts — has surged almost 20 basis points to 289 basis points, its highest level since February. Given the constellation of threats and dangers circling Italy’s economy, this is arguably lower than it actually should be. Italy’s current 10-year yield of 2.675% pales in comparison with the 7.56% the Italian government was paying in November 2011, during the peak of the Eurozone debt crisis.

And that is particularly bad news for Italian banks, which are notorious hoarders of Italian treasuries. After the Bank of Italy, they are the second largest holders of Italian debt. Italian government bonds make up 20% of the banks’ entire asset base. While other Euro area banks, including even those in Spain, Germany and France, were net sellers of domestic government bonds in April, Italian banks doubled down on their purchases, buying up €7 billion more.

Over the last 12 months, Italian banks have increased their holdings of domestic government debt by €62 billion. This issue has been termed the “doom loop,” the interdependence between shaky banks and shaky government debt: When one gets in trouble, it will make the condition of the other even worse, thus creating a feedback loop.

As the ECB has gradually exited the market with the ending of QE, and with other market players unwilling and able to take up the slack, Italy’s banks and other financial institutions made up the difference. But they do so at huge risk to their already fragile financial health. By Don Quijones.

Just bumping along the bottom, from hopeless to hope and back to hopeless. Read…  Deutsche Bank Death Spiral Hits Historic Low. European Banks Get Re-Hammered

17 comments for “Italian Banks Are At It Again, Shares Re-Crushed”