Just bumping along the bottom, from hopeless to hope and back to hopeless.

The amazing thing with Deutsche Bank shares is this: Since 2007, so for 12 years, bottom fishers have been routinely taken out the back and shot, every time, with relentless regularity – as have big institutional investors, from Chinese conglomerates to state-owned wealth funds, that thought they were picking the bottom. A similar concept applies to European banks in general. May 2007 was the high point. And it has been brutal ever since – 12 years of misery.

Deutsche Bank shares dropped another 2.9% on Monday in Frankfurt, and closed at a new historic low of €6.64 after hitting €6.61 intraday. This time, the blame was put on UBS analysts that finally stamped “sell” on the stock, replacing their “neutral” rating. Deutsche Bank’s market cap is now down to just €13.8 billion. Shares have plunged 39% over the past 12 months and 60% since January 2018 (data via Investing.com): 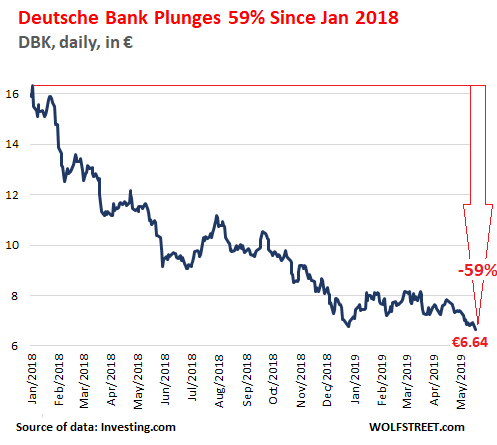 The bank has been subject to years of revelations of shenanigans that span the palette. Once a conservative bank that primarily served its German business clientele in Germany and overseas, it decided to turn itself into a Wall Street high-flyer that caused its shares to skyrocket until May 2007, when it got tangled up in the Financial Crisis that then led to a slew of apparently never-ending hair-raising revelations, settlements with regulators, and huge fines.

Since their death-spiral began in May 2007, Deutsche Bank shares have lost over 94% of their value. The UBS downgrade to sell came just in the nick of time: 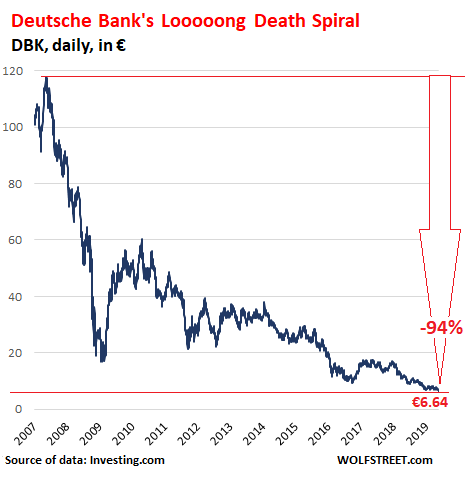 Deutsche Bank’s 6% unsecured contingent convertible bonds — perpetual bonds designed to be bailed in when regulators deem the bank close enough to toppling – are a gauge of what the market thinks the chances are of such an event.

But this is in euro NIRP land where negative yields reign, and where the average junk-bond yield is now just 3.53% (ICE BofAML Euro High Yield Index Effective Yield). In other words, the Co-Co bonds pay nearly twice the yield of the average euro junk bond. Let that sink in for a moment: 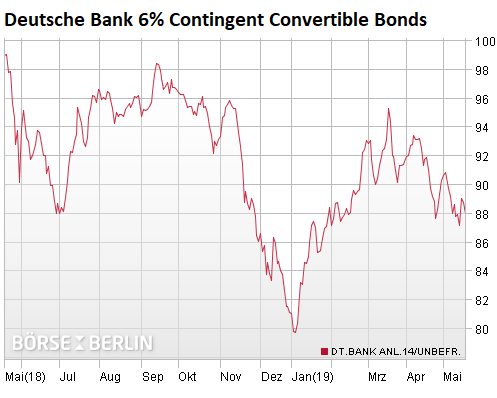 But in Europe, it’s not just Deutsche Bank. Part of the situation in the Eurozone is that the ECB’s primary role has been keeping the Eurozone duct-taped together via its negative interest rate policy and bond-purchase program that allows over indebted countries that don’t control their own currency – the euro – to get even more overindebted without feeling the wrath of the bond market. And it worked.

The ECB doesn’t really care about the banks. It cares about the Eurozone. NIRP is not a good deal for the banks, except in the very short term. And that is one of the reasons why the Fed, which is focused on fattening up the banks, has so far had no appetite for NIRP.

So the stocks of European banks, as depicted by the Stoxx 600 Banks index – which tracks 44 representative banks – dropped 1.6% on Monday to the lowest level since January 9, 2019, and has plunged 30% since the end of January 2018: 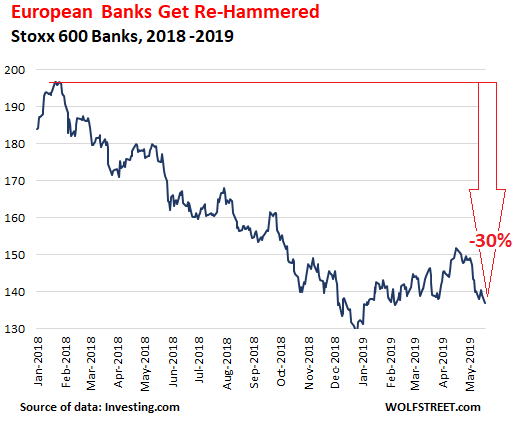 But going back 12 years, the plunge takes on different dimensions and parallels that of Deutsche Bank, with the index down 74% since May 2007, just bumping along the bottom, from hopeless to hope and back to hopeless: 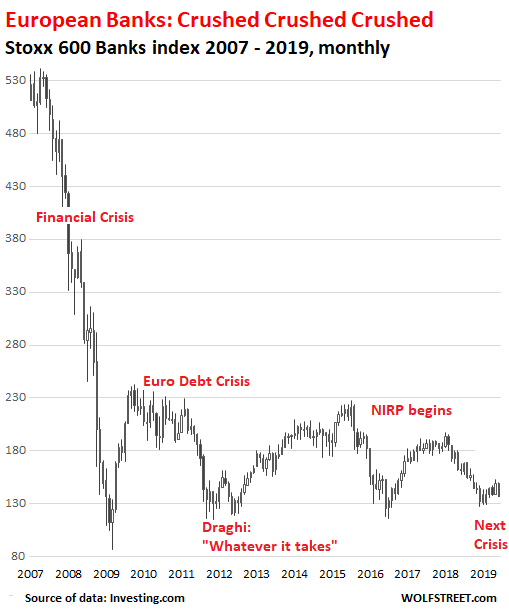