This market, after a historic rally despite declining corporate earnings in the first quarter, was looking for a trigger, any trigger, and it found a trigger, or triggers. But the trade war cannot explain the colossal flops in the over-hyped IPO realm.

Uber, which had sold its China operations and is no longer significantly tangled up in the US-China trade war, is morphing from the biggest, most hyped tech IPO in recent memory into the most colossal flop in recent memory. Shares plunged nearly 11% today to $37.10 a share. This left shares down 17.6% from its IPO price of $45, at which Uber had extracted another $8.1 billion from gullible investors.

Prior investors are even deeper in the hole. Uber extracted nearly $7 billion from institutional investors between December 2015 and February 2017 by selling them 140 million shares at $48.77 a share, over half of them to Saudi Arabia’s Public Investment Fund, and these folks are now down nearly 24%. Shares of Softbank, which also holds a large stake in Uber, fell 5.5% today.

Lyft dropped another 5.7% today, to a new closing low of $48.15. Lyft had been the trailblazer this year for the hottest most hyped IPOs.

On March 28, Lyft priced the IPO shares at $72 and extracted at this price about $2.3 billion in new money from IPO investors. On March 29, the first day of trading, it took hours of machinations before shares finally started trading, with a heavily mediatized “pop” of 21%, at $87.24. Then, Lyft shares plunged 10% in 4 Hours from “pop” to close. Today, shares were down 45% from the pop.

Both Lyft and Uber have no idea if, when, or how they’re ever going to reach a self-sustaining business model that doesn’t burn large amounts of investor cash every year. Now, since their IPO, they’re loaded up with cash to burn and can fuel their cash-burn machines for a little while.

Speaking of which…. Tesla extracted another $2.7 billion from investors last week via a share and convertible note offering to fuel its cash-burn machine. Its shares fell 5.2% today to $227.01, down 41% from its peak in June 2017. Giddy Tesla investors had first seen this share price of $227 in June 2014. Oh my, how time flies when you’re having fun.

Apple – unlike the hapless rideshare companies in search of a business model – is deeply tangled up in China with its supply chain and with its revenues. It’s also deeply tangled up in other issues, including iPhone sales that have gotten battered by competition in a stagnating smartphone market. It didn’t help that Apple got hit by a US Supreme Court opinion today that allows consumer plaintiffs to move forward with their antitrust lawsuit.

Intel fell another 3.1% today, to $44.76, bringing its plunge since its peak on April 22, 2019, to 26%. Global semiconductors sales are now in the steepest plunge since the Financial Crisis.

The Dow Jones Industrial Average fell 2.4% to 25,324, a level first visited on January 9, 2018. In other words, the index spent 16 months going nowhere despite hair-raising volatility that caused a 19% peak-to-trough plunge, followed by a blistering 22% rally in just four months. It’s now about 5% below its October 2018 peak. 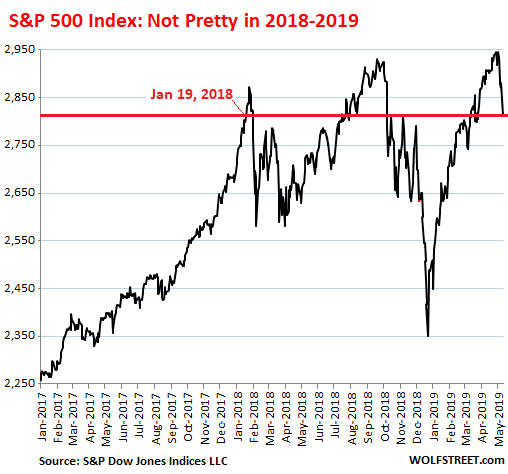 The straggler behind the Fed and the ECB gets the drift. Read…  QE Party Over, Bank of Japan Stealth-Tapers Further