More and more companies either choose not to invest in other countries or are prevented from doing so.

Global foreign direct investment flows plunged by another 27% in 2018 — after having already plunged 16% in 2017 — to just $1.1 trillion, the equivalent of 1.3% of global GDP, the lowest ratio since 1999, according to new data released by the OECD. It was the third consecutive annual plunge in global FDI flows, as more and more companies either choose not to invest in businesses or assets in other countries or are prevented from doing so.

At the peak in 2015, before the trade wars began, before the Brexit vote happened, and before China began cracking down on the capital outflows that had fueled big-ticket purchases of strategic companies across the globe as well as surging asset prices in multiple jurisdictions, global FDI flows totaled $1.92 trillion and represented around 2.5% of global GDP. FDI has since collapsed by 43%. 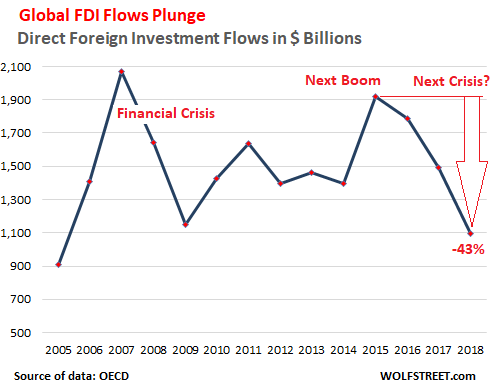 The OECD apportions much of the blame for the latest fall in FDI flows on the US tax reform in 2017, which prompted many US companies to repatriate large amounts of earnings held with foreign affiliates in countries such as Ireland and Switzerland, which both suffered a massive reduction in inward foreign investment last year.

The U.S. is traditionally the world’s biggest source of FDI, but last year it recorded negative outflows for the first time since 2005, as the movement of funds from U.S. investors into global businesses and assets reversed and flowed back toward the U.S., at least on paper. The total sum of outflows last year was -$48 billion, compared to $316 billion in 2017.

The negative outflows were concentrated in the first half of 2018, due to the immediate impact of the US tax cuts. By the second half of the year, the U.S. had returned to its position as the major source of FDI worldwide.

There were also widespread falls from 21 (out of 36) other OECD countries, in particular the United Kingdom, Luxembourg, Canada, Germany, Belgium, Japan, Korea, Denmark and Austria.

A concurrent sharp decline in FDI outflows from China for the second consecutive year made matters even worse, particularly in Europe and North America where total Chinese investment plummeted by 73%, from $111 billion in 2017 to $30 billion in 2018.

Chinese direct investment in U.S. assets collapsed to $4.8 billion in 2018, the lowest level in seven years and down 90% from the $46 billion invested in 2016. This was a result of a variety of factors including the ongoing trade war, stricter Chinese control over capital outflows, and greater US government scrutiny of Chinese acquisitions of American assets.

The country that received the most Chinese foreign direct investment in 2018 was the UK, though the amount of funds it received — $4.9 billion — was down 71% from the $17 billion it received in 2017. The fall was largely due to the absence of any mega-M&A deals, such as China Investment Corporation’s $14 billion purchase of the London-based warehouse company Logicor in 2017.

Total foreign direct investment into the UK plunged by over a third last year, to $64 billion, down from just over $100 billion in 2017. The latest OECD data provides further evidence of the heavy toll that protracted economic and political uncertainty is having on investment appetite in the UK, both among domestic and overseas investors. Investment fell quarter on quarter all through last year for the first time since the financial crisis of 2008-09, according to the Office for National Statistics. Fresh inward investment in the UK’s all-important automotive sector plunged 47% to just £589 million in 2018.

For the UK economy there was still some good news, as the British government was desperate to point out. Even after the recent drop in inward investment, the UK remains one of the world’s top five recipients of FDI inflows, together with the U.S., China, the Netherlands — which claimed the top spot in Europe with $70 billion of inward FDI — and Brazil.

Many European companies have put all non-essential UK commitments on hold, at least until the thick fog of uncertainty shrouding the UK’s political and regulatory future lifts. The EU’s recent decision, at the UK government’s behest, to extend the Brexit deadline to October 31, rather than providing much-needed clarity, have sown yet more confusion and uncertainty. And that’s the last thing businesses need.

That being said, the UK was not the only European OECD member to suffer a sharp decline in inward foreign investment last year. Germany’s FDI inflows plunged by 67% between 2017 and 2018, from €33 billion to just $11 billion. The German government’s decision to introduce tighter controls on foreign investment at the end of last year may well deepen this trend.

Thirteen other OECD countries, including Norway, Switzerland and Ireland, recorded decreased inflows while economies such as Spain, Belgium, Australia, the Netherlands, Canada and France received higher levels of inward investment. The EU as a whole received 20% less inward foreign direct investment from all other countries in 2018 while the U.S registered 10% less. By Don Quijones.

February was bad for London’s housing market. And the weakness is now spreading out from London. Read…  London Home Prices Had Biggest Monthly Drop Since Lehman