February was bad. Housing market weakness is now spreading out from London.

London home prices in February took their biggest one-off hit since the dark days of the last crisis, according to data published Thursday by the UK’s Office of National Statistics. The average price of a residential property in London tumbled 2% in February from January, the sharpest monthly drop since November 2008, when the City was grappling with the fallout from the Lehman Brothers bankruptcy. For the 12-month period, the average price dropped 3.8%, the sharpest year-over-year fall since August 2009, during the Global Financial Crisis. The average home in London is now worth £459,800 ($600,000), down 5.9% from the peak in July 2017: 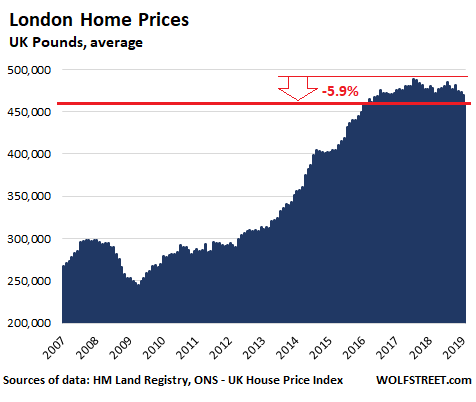 But it’s still more than double the median UK home price (£225,000). In other words, while prices may have moderated somewhat they’re still well beyond the reach of average Londoners. Here are some more standouts from the ONS report:

The slowdown is spreading out from London. Home prices in the south east of England recorded an annual decline (-1.8%) for the first time since 2011. Prices also fell in the North East and remained virtually unchanged in Yorkshire and the Humber.

Home price annual growth is slowing in England; prices tick down in Scotland. Home price growth has been gradually slowing ever since the summer of 2016, when a majority of British voters voted to leave the EU. Over the year to February 2019 the average home price in England rose by just 0.4% , down from 1.4% in January 2019. In Scotland prices slipped by 0.2%, down from a year-on-year rise of 2.4% in the previous month.

In the UK as a whole, the average home price increased by just 0.6% from a year earlier. It’s the slowest rate of growth since late 2012.

Prices did increase in a few places. Home price growth was strongest in Wales and the North West, increasing in both regions by 4.1% in the year to February 2019.

It’s a very different story in the capital, which during the first decade and a half of this century enjoyed much faster home price growth than the rest of the country but which is now suffering a much sharper slowdown. The most exclusive boroughs of the city center — often referred to as Prime Central London — have been hit hardest, with prices falling an estimated 14% from their 2014 peak. 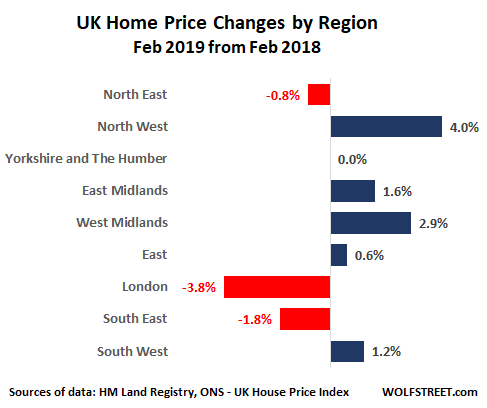 “The London sales market is in a prolonged downturn and the current uncertainty surrounding Brexit is clearly impacting consumer confidence,” Foxtons, one of London’s largest real estate agencies, said in its latest annual report. “We do not expect market conditions to improve significantly until the political and economic landscape becomes clearer.”

There’s little sign of that happening any time soon. If anything, there is more uncertainty today surrounding the UK’s political and economic future than there was in February, before Brussels decided to grant the UK government and parliament an extra seven-month “Brextension” to try to get their house in order and finally pass Theresa May’s wretched withdrawal agreement.

Just about the only thing that is clear today is that the political, business and financial establishment on both sides of the English Channel will do virtually whatever it takes to avoid a no-deal Brexit. But that doesn’t mean a no-deal Brexit can’t and won’t happen. It is, after all, the default option. And given the chaos and division gripping Westminster, the intractability of the Irish conundrum and the persistent support for Brexit across vast swathes of England and Wales, it’s certainly still within the realms of possibility.

It’s not just the rampant uncertainty that’s causing London home prices to fall. There are also the recent hikes in stamp duty and other property taxes that were intended to dampen demand among non-resident buyers and investors in a market that had long gone haywire. And they seem to be working.

There’s also the yawning housing affordability gap. Despite the fact that London residential property prices have become less expensive over in the last two years, prices are still not nearly low enough to fall within the grasp of most first-time buyers. In London, the housing affordability ratio — what you get if you divide the median price paid for residential property in a given area to the median workplace-based gross annual earnings for full-time workers — can range from 9.8, which is already pretty elevated, to over 40 depending on the neighborhood.

In 2018, eight of the ten least affordable local authorities in England and Wales were in London, with the remaining two being in the surrounding South East region. Most London boroughs are in the 10-20 range (based on ONS data). In the least affordable local authority in London and the UK, Kensington and Chelsea, median home prices are 44.5 times workplace-based median annual earnings. In some parts of the UK such as the North West they can run as low as 2.5 times median annual earnings.

Andrew Goodwin, associate director at Oxford Economics, sees this huge disconnect between home prices and earnings in London as the prime cause of the recent downturn. He also believes that prices are likely to stay in a rut for some time to come, especially given the current low level of transactions. According to LonRes, transactions slumped by 9% between 2017-2018 for London properties under £1 million, by 25% for properties between £1 million and £2 million and by 12% for properties between £2 million and £5 million.

As the affordability crisis in the capital spurs Londoners to relocate in droves to other parts of the country or put off buying a home altogether, and as high net worth individuals and companies continue to spurn London real estate, at least until a decision is finally made regarding Brexit, the future of one of the world’s prime real estate markets remains very much in the balance. By Don Quijones.

Despite “the lowest interest rates in more than a year.” Read…  House Prices in 12 of California’s Most Expensive Coastal Counties Fell in March from a Year Ago. Here are the Charts