The housing market in California with its sky-high home prices depends on blistering population growth. So here we go. The population of Los Angeles County, at 10.1 million, declined by about 13,200 people (-0.1%) in the 12 months through July 1, 2018, according to the Census Bureau’s new estimates. It was the second year in a row of year-over-year declines. The declines were still in the rounding-error neighborhood, but the swing from the prior yearly gains is a noticeable change in direction: 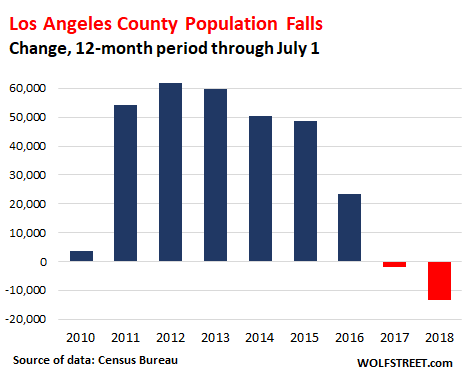 Is this the moment everyone has been waiting for – looking forward to it, given horrid congestion and housing costs; or dreading it given that home prices might come totally unglued if there aren’t enough people to sell these homes to – the moment when the population of Los Angeles, after years of blistering growth, begins to decline because people are finally doing what they have said in surveys they would do: Flee to other states?

Maybe some. Others might have moved across the county line.

In the other seven counties of the eight-county region of Southern California – Santa Barbara, Orange, Ventura, San Bernardino, Riverside, San Diego, and Imperial – the population grew over the 12-month period by 77,200 folks. So for all of Southern California, the population grew by 64,000 to 22.74 million people. And this growth too has been dwindling: 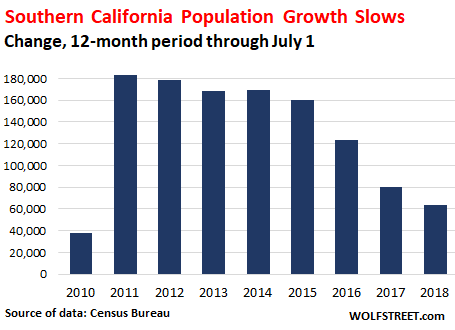 In the nine-county San Francisco Bay Area a similar slowdown is taking place, divided up between six counties of slowing population growth, and the three counties in the North Bay, where the population declined in part due to the horrific wildfires that devastated part of the area in 2017 and left people homeless. The chart below shows the North Bay counties combined. The drop over the past two years reduced the population to where it had been in 2014: 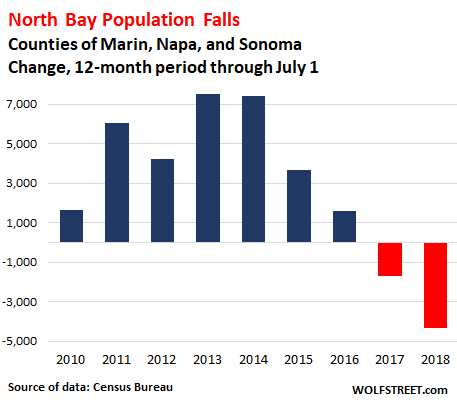 Despite all the “feces and needles” on the sidewalks that are trotted out in the media everywhere, and despite the endless series of surveys that hammer home over and over again that a truly mind-blowing number of people are planning to most definitely or just perhaps finally and forever bail out of the Bay Area over the “next few years” (for example, 44% most recently) so that the Bay Area would just empty out – well, it’s not yet happening, but getting a step closer.

In the two counties in the East Bay (Contra Costa, Alameda) and in Solano County (north east) a similar process has been taking place, at different speeds.

The net effect for the nine-county San Francisco Bay Area is this: The population grew over the 12-month period to 7.75 million, but the growth rate of 21,400 people over the period was the slowest since 2010, and was one-fifth of the growth rates in 2013 and 2014: 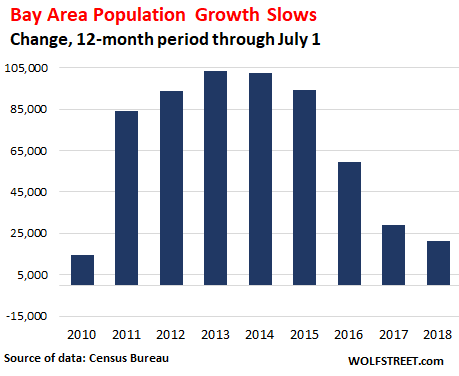 The state of California’s population ticked up to 39.56 million, an increase of only 158,000 souls, the slowest increase since 2010, and less than half the increases between 2011 and 2015, with population growth coming to a crawl or outright declining in the most expensive coastal counties, and growing a bit faster inland: 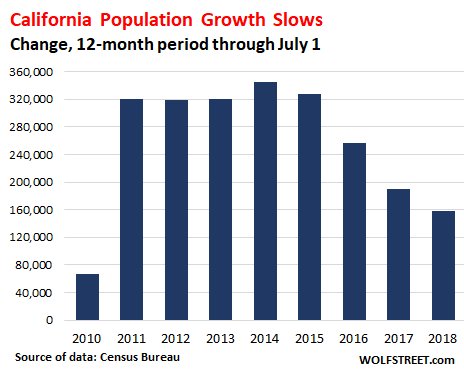 Oh deary, where does this leave the housing market? The endless and sometimes blistering population growth has been held up as powerful reason why home prices can only surge in California. A population decline in some of the most expensive areas would put these housing markets in a heap of trouble.

In the coastal counties, home prices are already under pressure. Despite “the lowest interest rates in more than a year,” as the California Association of Realtors put it, the median house price in March fell in 12 of the 16 most expensive coastal counties compared to March last year – yup the same counties featured above. Read… House Prices in 12 of California’s Most Expensive Coastal Counties Fell in March from a Year Ago. Here are the Charts