Despite “the lowest interest rates in more than a year.”

In California, the median house price in March was essentially flat with March last year at $565,880, according to the California Association of Realtors. But among the most expensive 16 coastal counties – those with a median price for a single-family house above $500,000 – there were only four counties where house prices ticked up compared to March last year: Napa +3.6%, Santa Cruz +0.9%, San Luis Obispo +3.2%, and Ventura +0.2%. In the other 12 counties, prices fell year-over-year. This year’s widespread decline in expensive counties is the first such event since the end of Housing Bust 1.

Despite “the lowest interest rates in more than a year,” sales volume in California dropped 6.3% in March, compared to March last year, to a seasonally adjusted annualized rate of 397,210 houses, according to the CAR.

Eight of the nine counties of the San Francisco Bay Area qualify for the “most expensive” label, with a median house price above $500,000: The counties of San Francisco, San Mateo and Santa Clara (Silicon Valley), Alameda and Contra Costa (East Bay), and in the North Bay, Marin, Napa and Sonoma. Only Solano County falls below it, with a median price of $438,500 (-1.5% year-over-year). So here are the eight counties, in order of median price in March 2019: 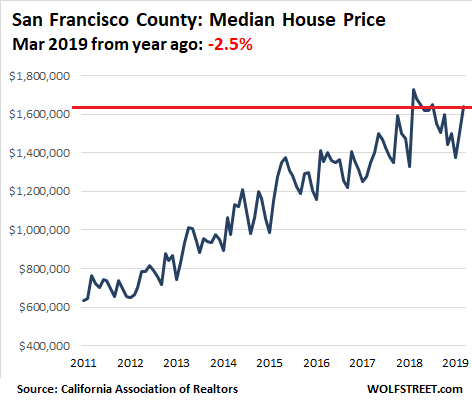 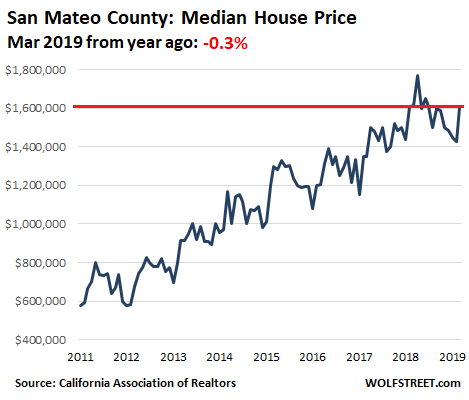 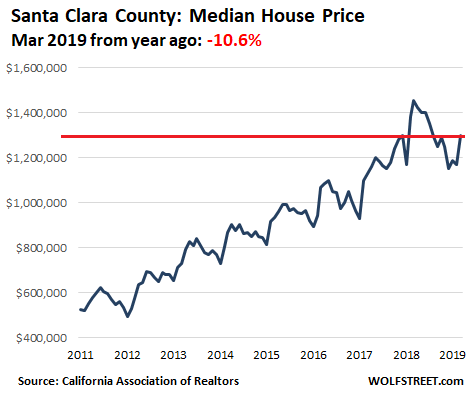 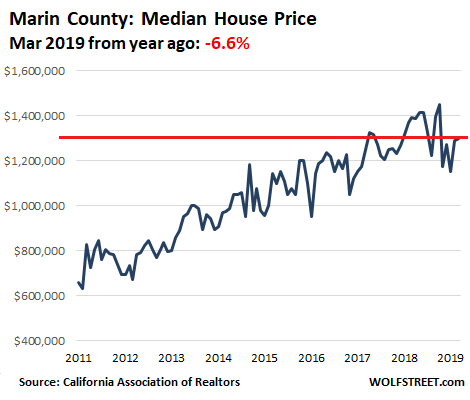 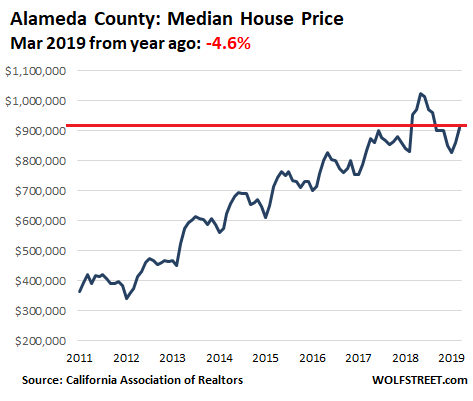 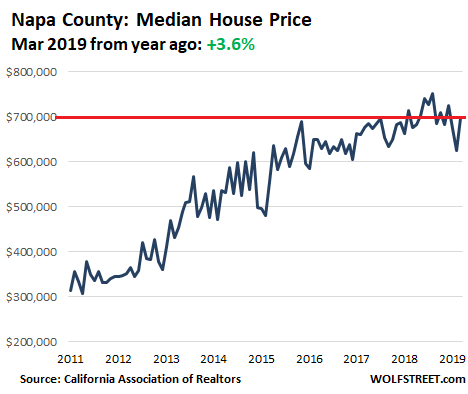 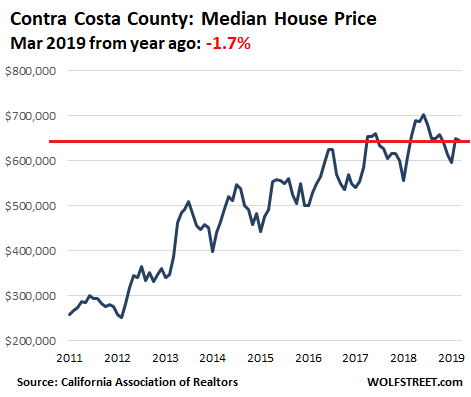 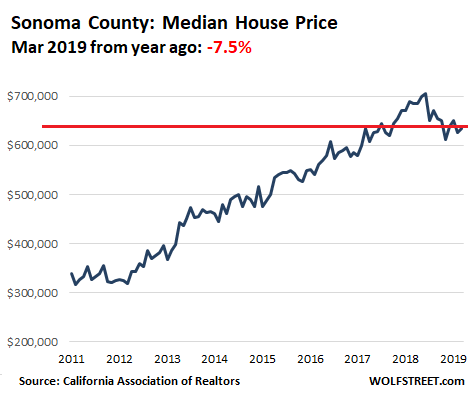 Four of the six counties of Southern California qualify for the “most expensive” label with a median price above $500,000: The counties of Los Angeles, Orange, San Diego, and Ventura. The median house prices in Riverside and San Bernardino, at $412,000 and $309,000 respectively, missed the cut-off point. Los Angeles is a huge and diverse county, with a very wide range of home prices that include some of the most expensive properties in the world. But the median price means that half of the homes sold for more and half for less, and in a vast and very diverse market like this, the relatively few very pricey homes don’t move the needle much. 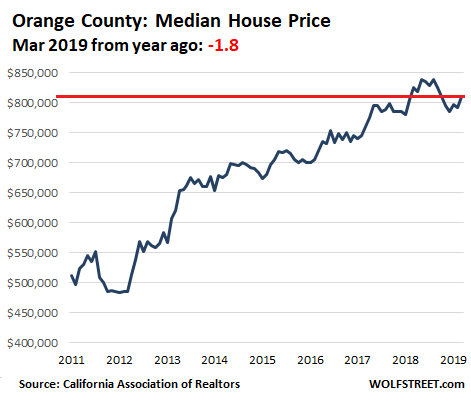 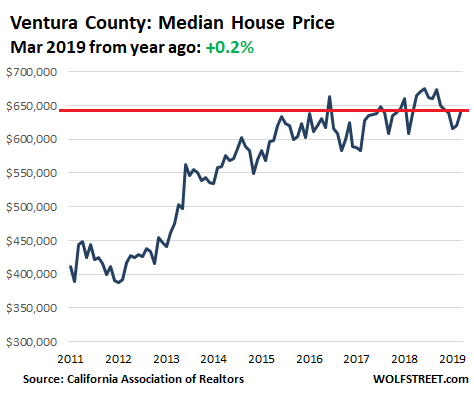 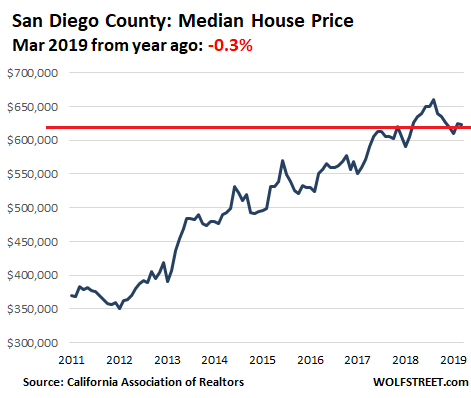 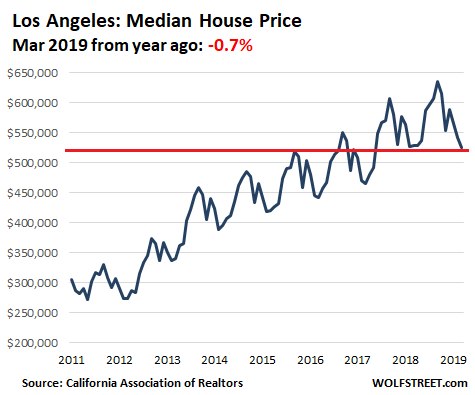 This long stretch of the beautiful California cost between the San Francisco Bay Area and Southern California is comprised of four counties: Santa Cruz, Monterey, San Luis Obispo, and Santa Barbara. All of them qualify for the “most expensive” label. 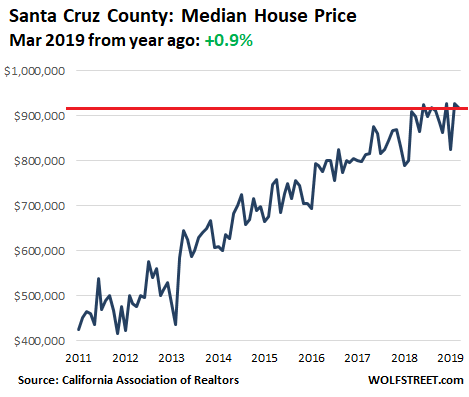 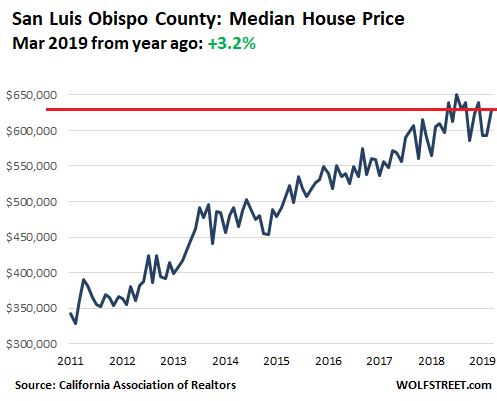 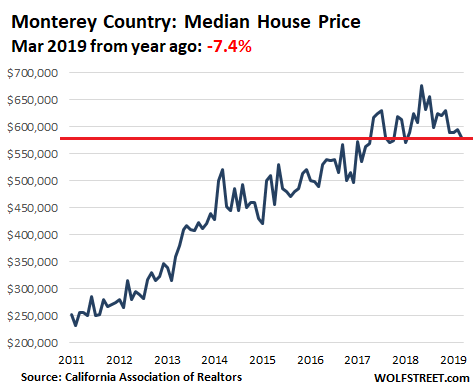 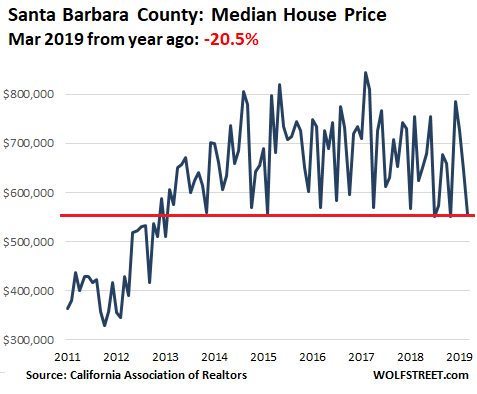 As the super-volatile chart of Santa Barbara shows, median prices can be noisy, and turning points are not always easy to see. But beyond the ups and downs: Most of the counties on his list have seen a blistering house price boom over the past seven years, and 2019 is the first time since Housing Bust 1 that in many of the most expensive counties, house prices have declined year over year. That’s what this means. It’s not a collapse. But it looks like a turning point.

The media has been busy publishing real-estate industry hype about how a tsunami of IPO millionaires is going to drive Bay Area home prices even higher. But not so fast. Read…. What’ll Happen to Home Prices in Silicon Valley & San Francisco after the Mega-IPOs? Last Two Times, We Got a Housing Bust

67 comments for “House Prices in 12 of California’s Most Expensive Coastal Counties Fell in March from a Year Ago. Here are the Charts”