Largest US Trucking Company: “Volume, or lack thereof, is obviously the main story.” The inventory pile-up hurts. And the driver shortage is ending.

J.B. Hunt, the largest trucking company in the US by revenues, and a barometer of the goods-based sector of the economy, reported late Monday that revenues rose 7.3% on higher freight rates and fuel surcharges, that net profit inched up only 1.2% despite those price increases, and that Intermodal revenues ticked up 2% while Intermodal shipping volume fell 7%. And that sums up about the freight industry that is facing a downturn in shipments but is clinging to price increases as sole source of revenue growth.

Freight shipment volume in the US across all modes of transportation – truck, rail, air, and barge – in March fell 1% from last year, according to the Cass Freight Index. It was the fourth month in a row of year-over-year declines, and the first declines since the transportation recession of 2015 and 2016. The chart shows the changes in percent for each month compared to the same month a year earlier: 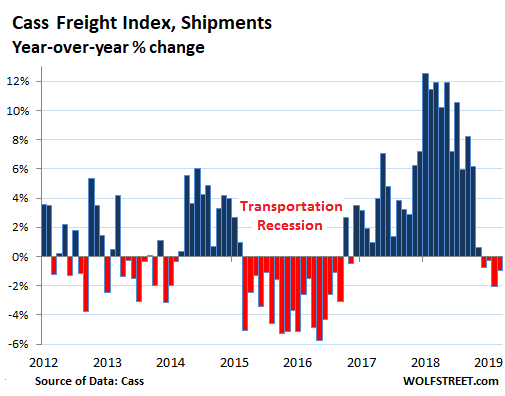 The Cass Freight Index tracks shipments of goods for the consumer and industrial economy by all modes of transportation but does not cover shipments of bulk commodities, such as grains or chemicals.

On a sequential basis from February to March, the Cass Freight Index for Shipments rose 2%, a typical seasonal increase this time of the year. The chart below shows just how big the boom in 2018 (black line, on top) had been, including six months with double-digit year-over-year growth rates in shipments: 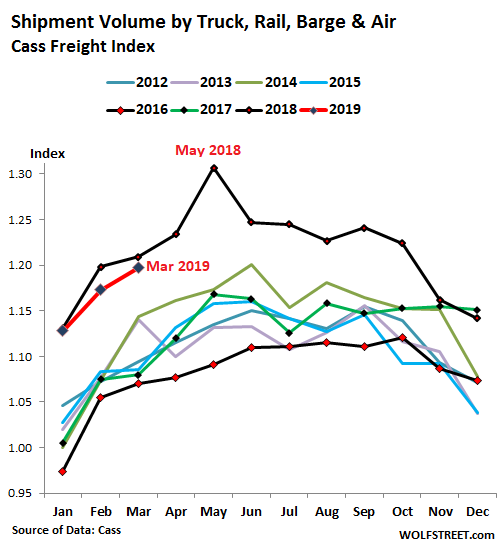 That boom of 2018 is now unwinding. And J.B. Hunt fleshed out some of the details. In the conference call (transcript via Seeking Alpha), CFO David Mee conceded that J.B. Hunt’s  “published results obviously revealed headwinds in parts of our business.” And he added, “In Intermodal, volume, or lack thereof, is obviously the main story.”

Intermodal freight in the US is a combination of truck and rail, such as containers hauled by truck and then transferred to rail, or semi-truck trailers that piggyback on special rail cars.

In January through late February, weather conditions caused some disruptions, Mee said. But…

When the service began to improve, we did not see a snap-back in customer demand in March which was our biggest surprise and frankly our miss to our expectations. While it is way too early to make a trend call for even second quarter 2019 or for the rest of the year, we are still waiting for customer demand to accelerate.

Terry Matthews, Executive VP Intermodal, added: “Much slower West Coast volume” in Intermodal were caused not only by the Chinese New Year “but because of the potential tariffs” that were supposed to go into effect. They had apparently caused some front-running.

“The other thing that we’re hearing from customers is that the warehouses are full,” Matthews said. “We’ve got a very late spring, and the typical restocking of spring merchandise did not show up in March as it has in past years.”

Concerning this pileup of inventories, David Mee added: “I think they need to bleed off some inventory here early in the second quarter.” In other words, these goods in warehouses need be sold – and orders and shipments are going to slow until inventories have been whittled down.

The chart below shows this inventory pile-up and its relationship to shipment volume: The Cass Freight Index for Shipments (columns) and the wholesale inventories of durable goods (green line) — reported most recently by the Commerce Department on March 22. Both are expressed as percent change from the same month a year earlier. Inventories follow shipments with a lag: 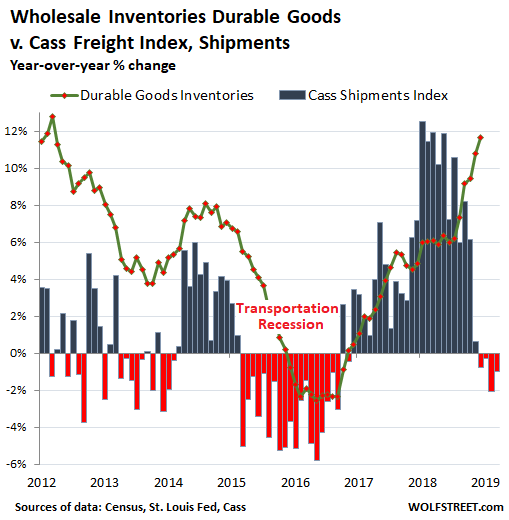 But freight rates in Intermodal, as J.B. Hunt pointed out, have surged, and trucking companies continue to be able to push them higher for now, despite declining shipment volume. J.B. Hunt reported a 2% increase in Intermodal revenues in Q1 due to higher prices, but on a decline of 7% in volume.

Industry-wide, it’s similar: The Cass Intermodal Freight Index, which measures freight rates for Intermodal, jumped 6.1% in March year-over-year, though that increase was down from six double-digit increases in a row last year, and was the lowest increase in 12 months. So the declining shipment volume is just now barely cooling off the price surges: 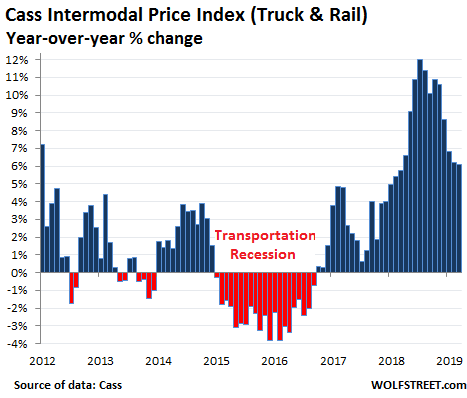 And a similar scenario is playing across all modes of transportation: On slightly lower shipment volume, price increases still persist, and shippers – such as industrial companies, wholesalers, and retailers – are spending more to ship less, though the pricing pressures are starting to abate just a tiny bit.

The Cass Freight Index for Expenses shows this trend. It covers spending on all modes of transportation – truck, rail, air, and barge – and includes fuel surcharges. It reflects the total amount spent by shippers. It reached a historic peak last September. So far this year, it has been tracking 5.5% to 7.5% higher than last year as the total amount spent by shippers is getting pushed up by higher freight rates and fuel surcharges, despite dropping shipment volume — on the theme that shippers spend more to ship less: 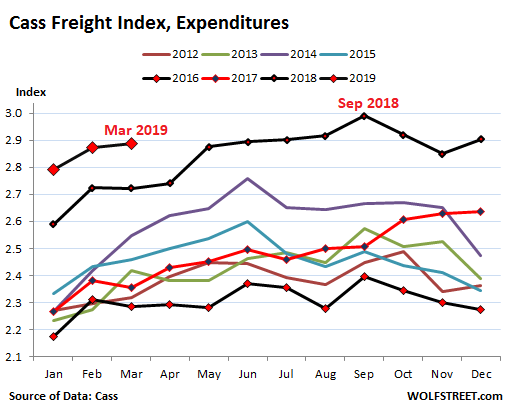 And the driver shortage, given the decline in volume? It is abating, according to J.B. Hunt’s Nick Hobbs, Executive VP of Dedicated Contract Services:

There are still some tight markets out there in Northern California or the Pacific North West, Chicago, Ohio through to the Northeast where we still have some extra incentives on to hire drivers. But in the rest of the areas, it has softened up. We’re not talking wage reductions with drivers, but it has eased up some. So it’s still tight in some markets but we feel pretty good about where we’re at from a driver positioning as of today.

And Matthews, speaking on the driver situation in the Intermodal segment, added: “Yes, I would say there’s a leveling off. There are pockets that Nick had mentioned but there’s a leveling-off effect, and it’s not the same environment as what we saw last year.”

From “capacity panic” to “overcapacity” in less than a year? Read… Next Phase in Trucking Boom-Bust Cycle Has Started

73 comments for “What J.B. Hunt Just Said About the U-Turn in Trucking”