After seven months in a row of month-to-month declines, prices of single-family houses in the Seattle metro ticked up 0.57% in February and are now down 5.4% from the peak in June last year, according to the CoreLogic Case-Shiller Home Price Index released this morning. The index is now flat with March last year, and the year-over-year gain has been whittled down to just 2.8%, the thinnest such gain since June 2012, as Seattle was beginning to bounce off the bottom of Housing Bust 1. 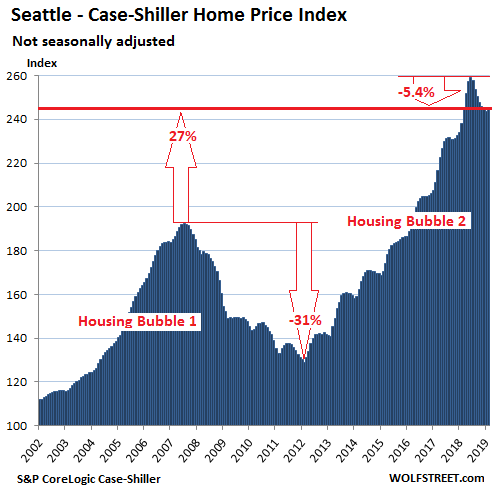 The Core-Logic Case-Shiller Home Price Index is a rolling three-month average; this morning’s release represents closings that were entered into public records in December, January, and February.

After six months in a row of month-to-months declines, prices of single-family houses in the five-county San Francisco Bay Area – the counties of San Francisco, San Mateo (northern part of Silicon Valley), Alameda, Contra Costa (in the East Bay), and Marin (in the North Bay) – ticked up 0.6% in February. 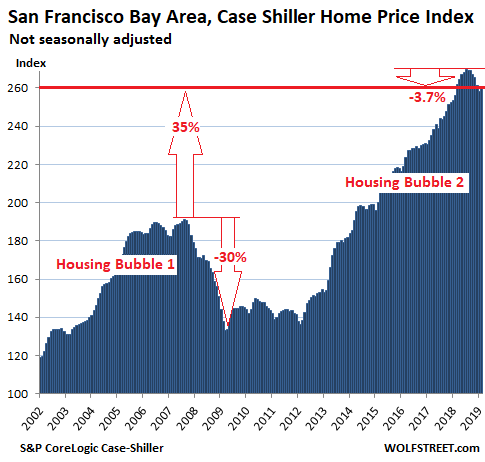 For the San Francisco Bay Area, Case-Shiller also provides a separate index for condo prices, which, after eight months of declines, also ticked up 0.6% in February from January. Condo prices are now down 4.8% from their peak last June, clinging by their teeth to a year-over-year gain of 0.3%: 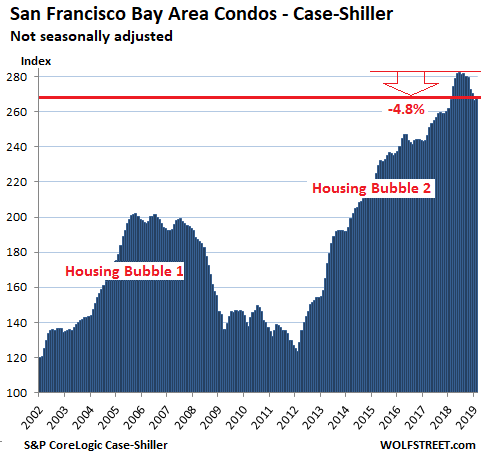 The Case-Shiller methodology is based on “sales pairs”: It compares the sales price of a house in the current month to the last transaction of the same house, which might have occurred many years earlier. This eliminates the issues of “mix” that can skew median price indices and the issues of a few big outliers that can skew average price indices. The Case-Shiller index tracks changes in price of the same house (sales pairs) over time, and thereby it tracks how much more dollars it takes to buy the same house: in other words, it tracks the purchasing power of the dollar with regards to the same house over time. This makes the index a good measure of house-price inflation.

Condo prices in the New York City metro remained essentially unchanged in February, compared to January, are down 1.2% from the peak in October, and are down year-over-year a tiny 0.2% from February last year. This is the first metro on this list of the most splendid housing bubbles in America where prices are down year-over-year: 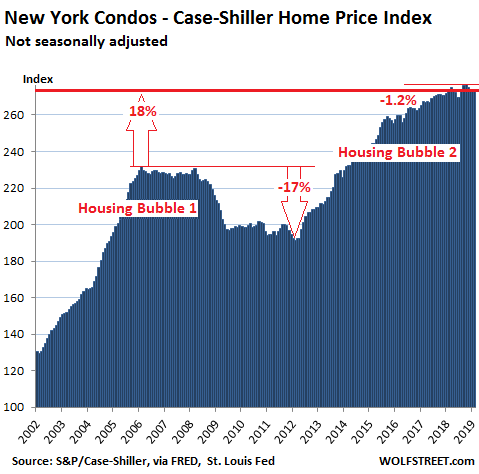 After six month-to-month declines, house prices in the San Diego metro rose 0.9% in February from January and are now down 1.9% from the peak last July. Compared to February last year, the index is up just 1.1%: 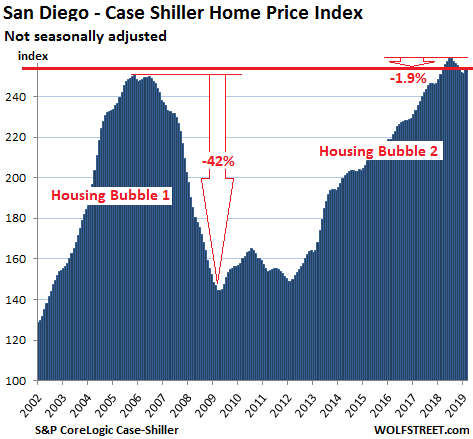 The Case-Shiller index for the Los Angeles metro was flat in February compared to January, leaving it down a tiny tad (-0.2%) from the peak in July. The index is up just 1.8% from February last year: 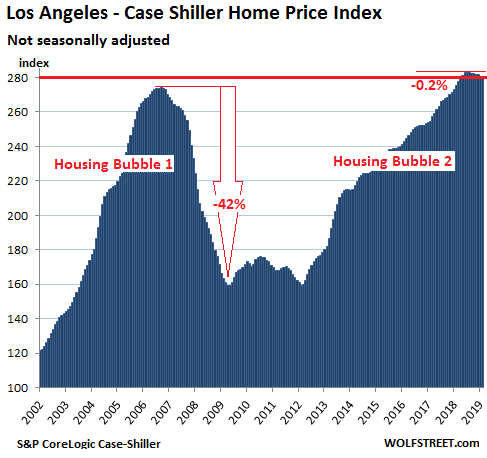 House prices in the Boston metro declined 0.4% in February from January and 1.3% from the peak in November. The year-over-year gain eroded to 3.2%: 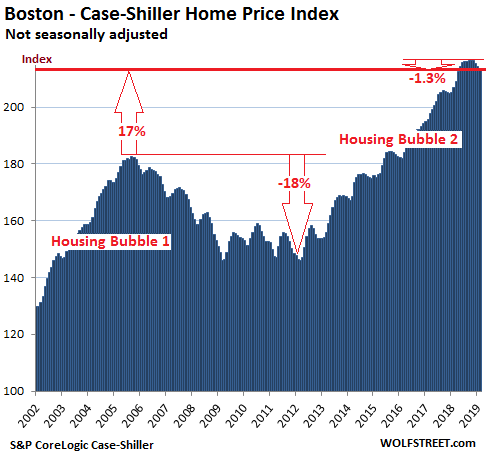 House prices in the Portland metro were essentially flat in February compared to January, and remain down 1.6% from the peak in July 2018. The year-over-year gain shrank to 3.0%: 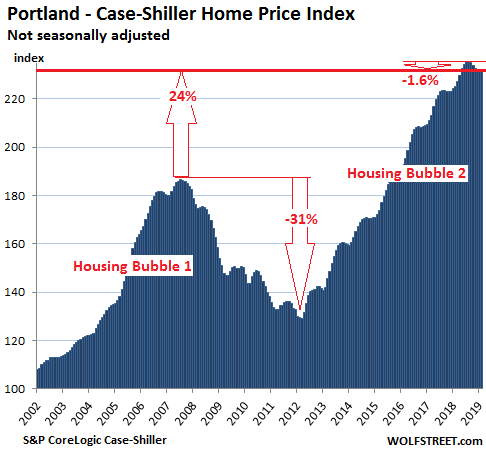 After ticking down by tiny increments month after month from their peak in July last year, House prices in the Denver metro rose 0.9% in February compared to January, which made up for the tick-downs of the prior month and surpassed by a hair the prior peak in July. But the year-over-year gain shrank further to 4.7%: 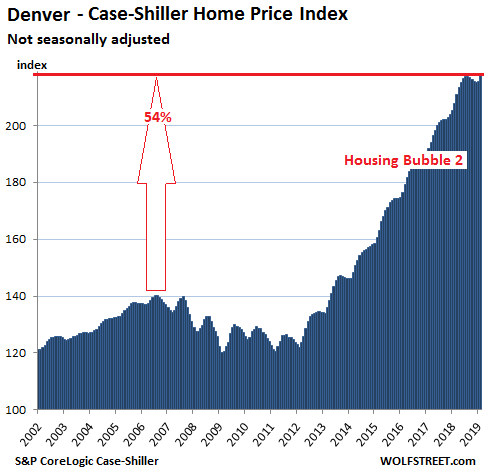 The Case-Shiller index for the Dallas-Fort Worth metro ticked up in February from January to eke out a new record. Since June last year, the index has inched up only 0.7%. This leaves the index up 3.4% year-over-year, the slowest price gains since 2012: 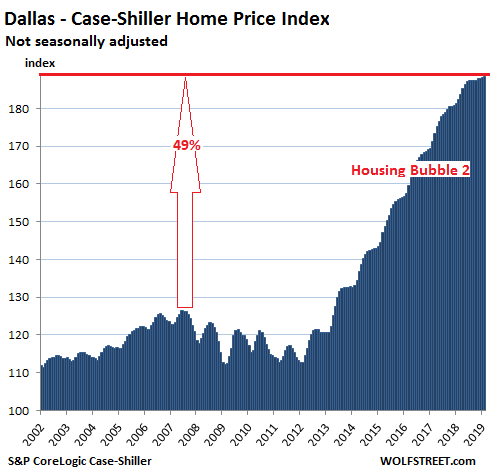 In the Atlanta metro, house prices ticked up in February from January matching the record levels in November and December for a flat spot at the top. The index is up 4.7% year-over-year: 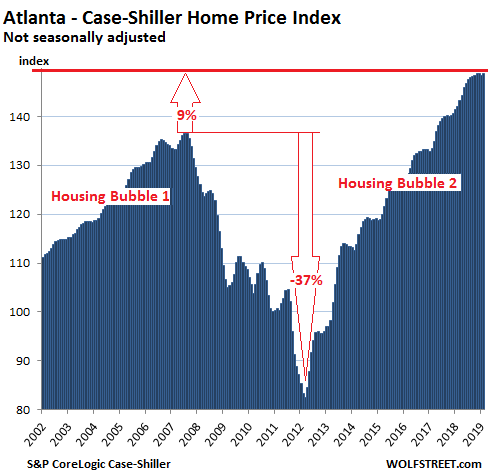 So finally, sales volume of new houses is ticking up. Read…  Cut the Price and They Will Come: New House Prices Drop to December 2014 Level

135 comments for “The Most Splendid Housing Bubbles in America, April Update”