The surprise in the SEC 10-Q filing when no one was supposed to pay attention.

Today, when no one was supposed to pay attention any longer, Tesla filed its quarterly report Form 10-Q with the SEC. Tesla had reported “earnings” on April 24, a doozie of a net loss of $702 million. But today, after the hoopla of its earnings report had died down, Tesla disclosed a slew of things that it hadn’t disclosed last week, including a record amount of sales of pollution credits.

Without those taxpayer-funded pollution credits that Tesla gets from the government and sells to other companies, its loss as automaker and solar-panel company would have been $918 million and its negative cash flow wouldn’t have been a cash drain of $919 million but a cash sinkhole of $1.14 billion

The sales of these regulatory credits are booked as revenue, so they increase revenues by that amount. Since there are no costs associated with them, they also inflate by that amount gross profits, income from operations, net income, and cash flow. In other words, those taxpayer-funded credits are at the core of Tesla’s business model and flow straight from the top line all the way down to the bottom line.

On April 24, as I noted at the time, Tesla disclosed merely its $15 million in ZEV credits. But it kept its non-ZEV credits secret, and for a very good reason, with this kind of earnings chart: 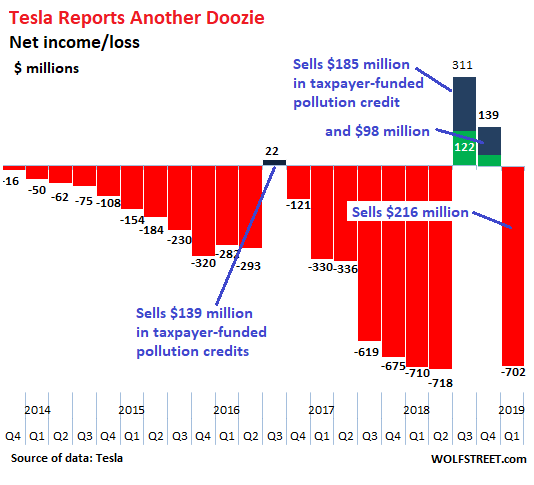 Today, in its 10-Q filing, it disclosed what was really going on with one sentence in a note discussing the composition of its revenues under the heading, “Automotive & Services and Other Segment” (I added the bold):

Those regulatory credits in Q1 of $15 million in ZEV credits plus $200.6 million in non-ZEV credits amount to $215.6 million, or 4.8% of the Tesla’s revenues. These disclosures show to what extent it depends on the taxpayer for revenues, profits (well, lower losses), and cash flow.

This is the reason Tesla doesn’t disclose these credits fully during its earnings release when the media might jump on it (possibly) but delays the disclosure until it files its quarterly 10-Q with the SEC usually the following week.

Without the revenues from selling those taxpayer-funded credits to other companies, Tesla’s operations as an automaker and a solar-panel maker would look a whole lot worse than they already do. And this comes on top of the enormous benefits Tesla still reaps from the now phasing-out taxpayer-funded credits that buyers of its vehicles obtain from the federal government and from some state governments.

71 comments for “Tesla Discloses Record Pollution Credits for Q1: Without Them, it Would Have Lost $918 Million and Bled $1.14 Billion in Cash”