Here is the good news: Lower prices stir sales. Clearly, homebuilders are motivated to move their inventory, and they’re making deals at lower prices. The median price of new single-family houses whose sales closed in December fell 7.2% from a year earlier, to $318,000, according to the Commerce Department this morning.

The new-house sales data, produced jointly by the Census Bureau and the Department of Housing and Urban Development, is very volatile. It is revised in the following months, often quite drastically. But despite the ups-and-downs in the monthly data, trends emerge.

The steep year-over-year price increases in prior years formed a multi-year boom in prices that has now outrun what the market can bear. The median price of new houses ballooned by about 55% from the range in 2011 and 2012 to the peak in November and December 2017 ($343,300), which exceeded by 31% the crazy bubble peak in March 2007, before it all came apart: 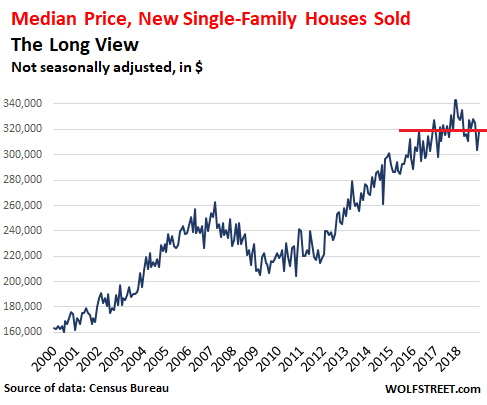 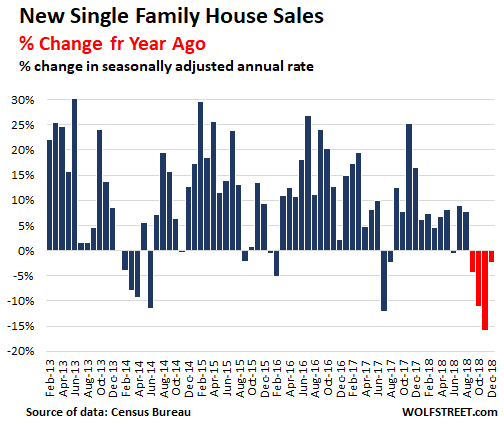 In terms of the seasonally adjusted annual rate of sales — 621,000 in December — the chart below shows the dynamics over the past six years. Lower prices recently have started moving the needle, but not enough: 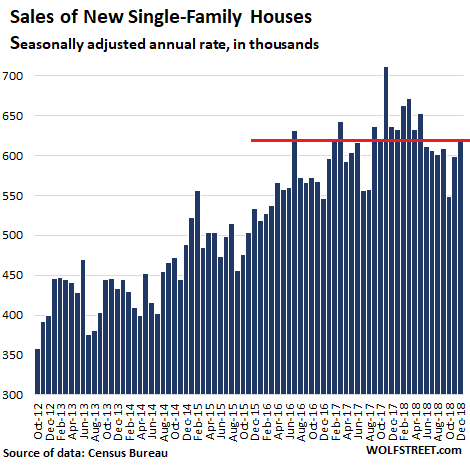 That the price declines have not moved the needle enough also shows up in the inventory of new houses for sale that just keeps on rising. In December, the supply surged 17% year-over-year to 344,000 houses, for a supply of 6.6 months at December’s rate of sales (up from 5.5 months a year earlier): 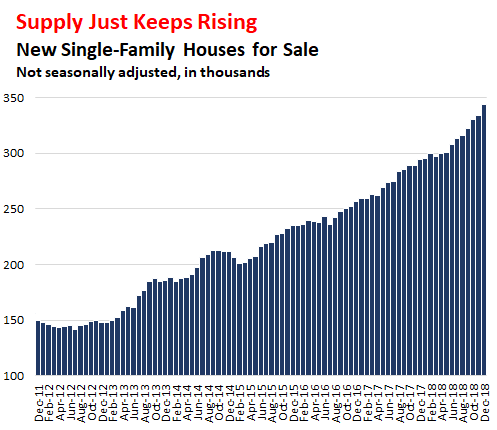 So it looks like homebuilders will have to sharpen their collective pencil in order to bring prices down to where the buyers are, and where that inventory for sale starts shrinking.

Homebuilders build and sell houses – that’s their business model. They cannot just not build and not sell houses. So they add inducements, such as free upgrades to the kitchen, and when that’s not enough they have to try to hit the price points where potential buyers turn into actual buyers. And they’re trying. But the market is fluid, and buyers move lower. And so there remains a lot of work to be done on the price front.

The San Francisco Bay Area and the Seattle metro lead with the biggest multi-month home-price drops since 2012; San Diego, Denver, Portland, Los Angeles all book declines. Prices in other metros have stalled. And a few eke out records. Read… The Most Splendid Housing Bubbles in America Get Pricked