OK, it looks like GDP growth, released last week for the fourth quarter (+2.6% annualized rate), will be revised lower on March 28, given today’s data on construction spending for December, which had been delayed due to the government shutdown. 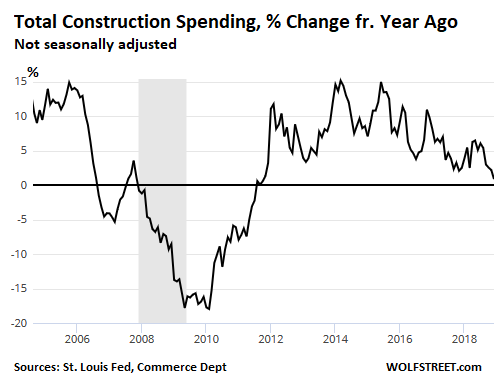 Construction spending peaked in 2005, then declined through the Great Recession and into early 2010, followed by a catch-up building boom with year-over-year growth rates of over 20% for brief periods and over 10% for most of the time between mid-2012 and late 2015.

Construction spending, at nearly $1.3 trillion in 2018, accounted for over 6% of the US economy. It can’t be offshored and has a large secondary impact on the economy, from companies buying construction equipment to workers buying new vehicles and sandwiches. It matters to the US economy. 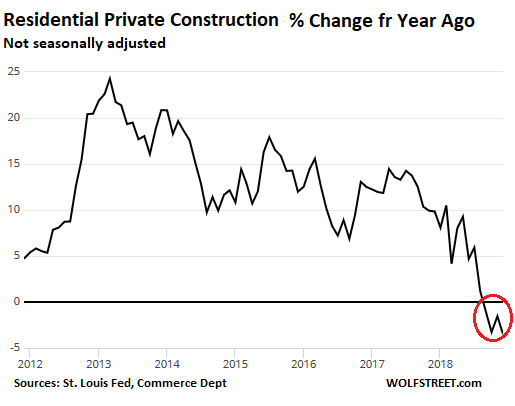 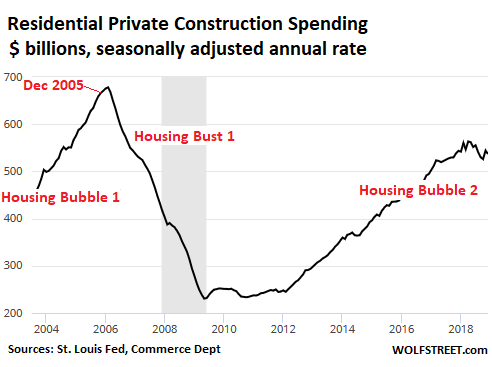 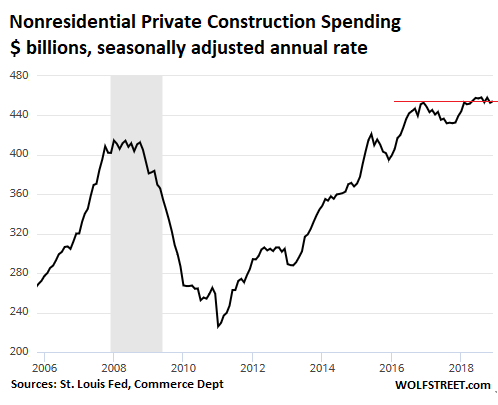 Public construction spending – including on the infamous US infrastructure such as highways and water-and-sewer systems – rose 4.2% year-over-year in December (not seasonally adjusted). But in dollar terms, it has not gone anywhere in 10 years, after peaking in March 2009. December’s spending at $301 billion seasonally adjusted annual rate was back where it had first been in March 2008: 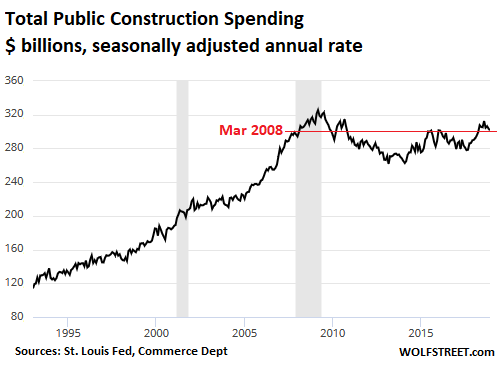 This report on December construction spending was another in a series of reports for late last year that had been delayed due to the government shutdown, and that showed, when they were finally released, an economy whose growth was slowing toward the end of the year, with some actual year-over-year declines cropping up, such as in residential construction.

For the markets, the government shutdown, and the accompanying blackout of economic data, was precisely what was needed the most to sustain the blistering rally in January and February. But this data is now trickling out. And it is putting together the uninspiring image of an economy that is growing but at a considerably slower rate than earlier in 2018, and is right back in the range of where it had been in prior years despite the enormous dual stimulus of huge tax cuts and ballooning government spending.

The four giants of manufacturing – China, the US, Japan, and Germany – account for 58% of global manufacturing value added. And the three biggest exporters are getting hit. Read…  US is Cleanest Dirty Shirt Among Manufacturing Giants. China, Japan & Germany Sink