Where would GDP growth be without federal borrow-and-spend?

So the dreams of 3%-plus economic growth in 2018 were fulfilled, after tax cuts and ballooning federal deficit spending, which acted as a huge stimulus: In the fourth quarter, the economy as measured by inflation-adjusted GDP grew by 0.55% from the third quarter, not annualized (we’ll get to the “annualized rate” in a moment).

This brought GDP growth for the entire year 2018 to 3.1%, according to the Bureau of Economic Analysis this morning. This places the year ahead of the top years since the Financial Crisis: 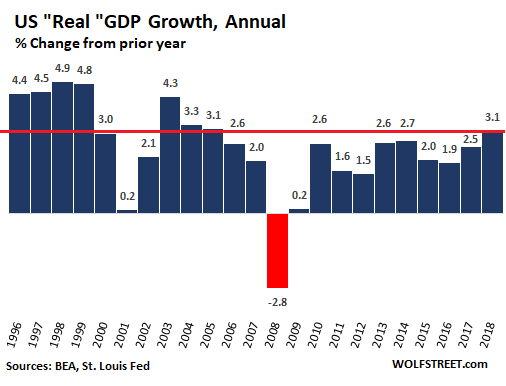 The BEA also reports – this is what you see in all the headlines though it’s the most convoluted and somewhat misleading way of presenting GDP growth – the current quarter’s growth rate but extrapolated out over an entire year; so what this Q4 growth rate of 0.55%, mentioned above, would mean for the whole year if the economy had grown for an entire year at the same rate. For Q4 this seasonally adjusted, inflation-adjusted “annualized rate” of growth was 2.6%. 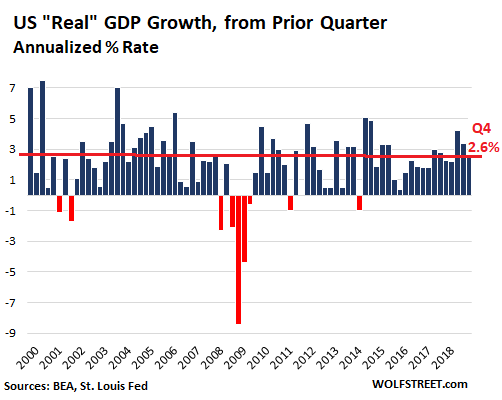 Today’s GDP release should have been reported as “advance estimate” on January 30 but was delayed due to the government shutdown. Today, the BEA was supposed to report its revised data of GDP, the “second estimate.” Today’s report is, according to the BEA, the replacement for the “second estimate.” The third estimate, based on more complete data available by then, will be reported on schedule on March 28.

GDP not adjusted for inflation

In the fourth quarter, GDP not adjusted for inflation (“nominal” GDP) rose at an annualized rate of 4.6%. This brought nominal GDP growth for 2018 to 5.2%: 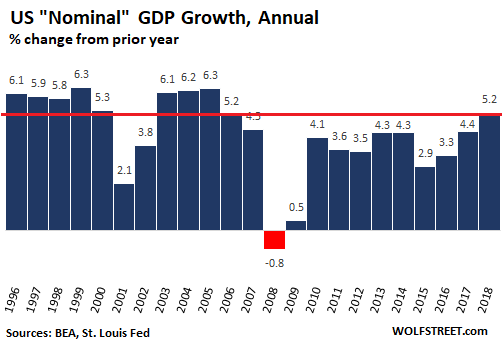 Finally, GDP is measured in dollars that are spent, invested, or blown by economic players (consumers, businesses, and governments) in a given time period in the US. However, illegal spending and investing — such as on controlled substances, including imports, exports, production, retail sales, wholesale trade, investment in inventories, and the like – are hard to measure by standard methodologies on a quarterly basis because these enterprises and individuals don’t respond properly to government surveys on which much economic reporting is based.

So this dollar measure of GDP is incomplete. Nevertheless, nominal GDP, not including services such as prostitution and goods such as narcotics, increased in 2018 by $1.0 trillion to reach $20.5 trillion in today’s dollars: 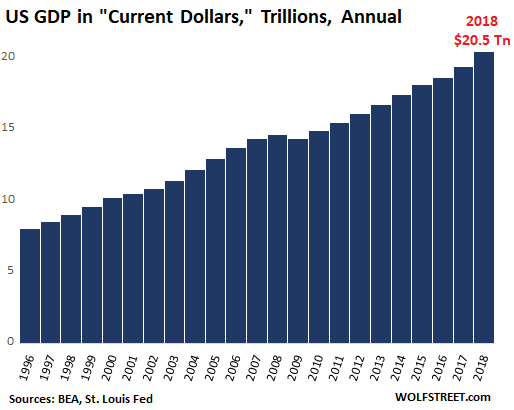 Where do these dollars in GDP come from?

Limited as GDP measures are, they do not include where the dollars came from that were invested, spent, or blown. Governments play a large role in GDP. Just the federal government alone is a major contributor behind GDP. Everything it spends and invests in the US goes into the GDP formula. What does not go into GDP is where those dollars came from. Much of it came from tax revenues, fees, and other receipts. The remainder came from borrowing.

In the calendar year 2018, the federal government’s debt grew by $1.4 trillion, to end the year at $21.97 trillion. If you exclude the distortive effects of the last debt-ceiling fight, the increase in 2018 comes to around $1.3 trillion.

Most of the additional borrowing of $1.3 trillion was added to GDP and therefore to GDP growth. But GDP growth in current dollars totaled just $1.0 trillion. Without that additional federal borrow-and-spend, GDP growth would have been negative.

Even the BEA made reference to it when it listed “federal government spending” as one of the primary contributors to GDP growth. So I will leave you with this chart of one of our primary drivers behind GDP growth (updated through February 28, 2019): 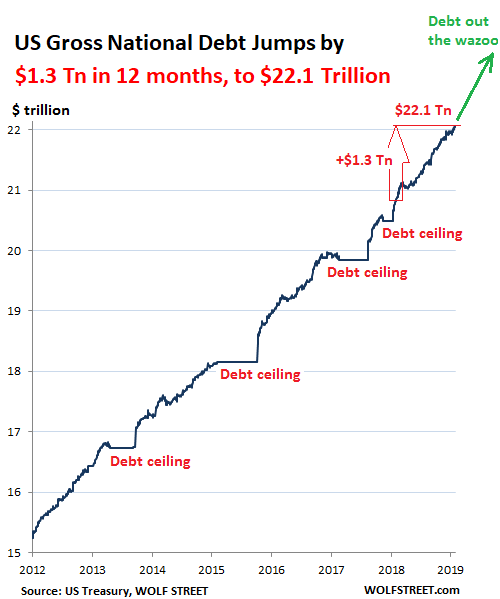