These unsettling tidbits about sudden problems on the demand-side in China.

Imports by China and other emerging Asian economies in December plunged to the lowest level in two years, in the steepest one-month plunge since 2008, after having already plunged in November, according to the Merchandise World Trade Monitor, released on Monday by CPB Netherlands Bureau for Economic Policy Analysis, a division of the Ministry of Economic Affairs. 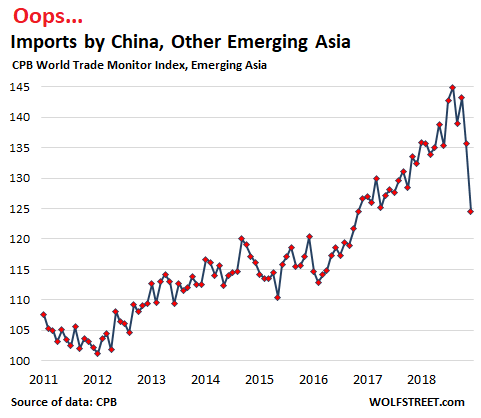 If the term “plunge” shows up a lot in discussions about certain aspects of the Chinese economy, it’s because that’s the kind of sudden wild moves now cropping up.

The fact that imports into Emerging Asia are plunging is a sign of suddenly and sharply weakening demand in China. This type of abrupt demand-downturn was clearly visible in the double-digit plunge in new-vehicle sales in China over the last four months of 2018, plunging demand in many other sectors in China, and record defaults by Chinese companies. When it comes to China, “plunge is no longer an exaggeration.

So the US trade actions against China – the variously implemented, threatened, or delayed tariffs – was largely geared toward hitting exports by China to the US. But it was imports that plunged!

Exports from Emerging Asia too dropped in November and December, but not nearly as brutally as imports, down by 6.7% over the two months combined. And these drops were not all that unusual in the export index: 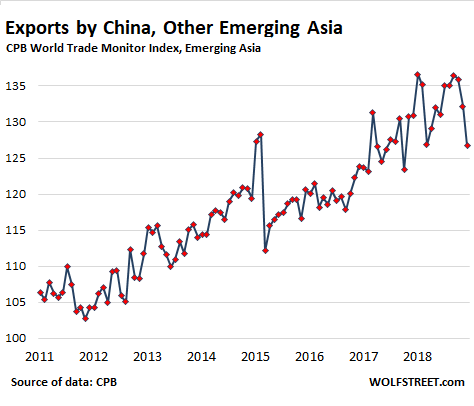 To compile the data for its World Trade Monitor, the CBP gathers data from official data providers in the individual countries (technical description). Because US import and export data for December was not available due to the partial government shutdown, the CBP estimated the data for December by assuming it was the same as in November.

The overall World Trade Monitor — for trade in all directions by all economies it covers –dropped 1.9% year-over-year in December, largely due to the plunge in imports and exports in Emerging Asia.

In the advanced economies – US, Japan, the Euro Area, and “other” – imports in December were about flat year-over-year, while exports fell 1.2% year-over-year.

So the global trade situation outside of Emerging Asia is not exactly hunky dory but not totally alarming.

But the situation in Emerging Asia, and mostly China, is alarming. There is something big transpiring on the demand side, for imports to plunge like this.

Whatever it is, it must be rattling the nerves of the leadership. The New York Times just reported that President Xi Jinping “abruptly summoned hundreds of officials to Beijing recently, forcing some to reschedule long-planned local assemblies. The meeting seemed orchestrated to convey anxious urgency. The Communist Party, Mr. Xi told the officials, faces major risks on all fronts and must batten down the hatches.”

Whether dealing with foreign policy, trade, unemployment, or property prices, he declared, officials would be held responsible if they slipped up and let dangers spiral into real threats.

“Globally, sources of turmoil and points of risk are multiplying,” he told the gathering in January at the Central Party School. At home, he added, “the party is at risk from indolence, incompetence and of becoming divorced from the public.”

Mr. Xi made clear that the economy was a major concern, telling officials to beware of “black swans” and “gray rhinos” — investor jargon for surprise economic shocks and financial risks hiding in plain sight.

Clearly, something is up in China, and it bubbles to the surface in unsettling bits and pieces on the demand side. The official data on the economy still look blindingly rosy, with the GDP-growth-by-fiat-numbers still at over 6%, copy-and-paste with slight variations to make it look natural. But the relentless accumulation of awful tidbits on the demand side are starting to paint a different picture.

A painful moment of truth for banks and investors, hammered by “uncertainty over the accuracy of the companies’ books and disclosure of pertinent information,” according to Fitch. Read...  Record Defaults by Chinese Companies: Fake “Cash” & Fake Accounting

71 comments for “Oops, Imports by China, Emerging Asia Plunge Most Since 2008”