But it wasn’t the central bank that pricked the bubble; its interest rate is at a record low!

The relentlessness of the housing busts in the regions of Sydney and Melbourne – they account for about 55% of Australia’s housing stock by value – is quite something. At some point, it seems, the price declines would slow down at least for a little while, or even perform a quick bounce, before falling again. But no. The downward momentum is picking up.

For Sydney, according to CoreLogic’s Daily Home Value Index, prices dropped 1.8% in December from November, in just one month! The index is now down 11.1% from its peak in July last year: 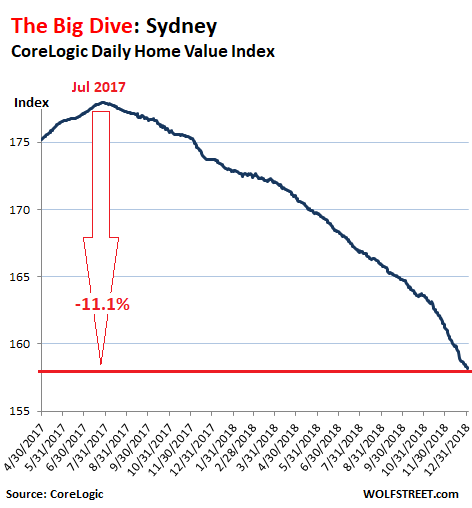 In the calendar year 2018 in Sydney, the prices of all types of dwellings fell 8.9%, with prices of single-family houses down 10.0%, and prices of condos (“units”) down 6.3%. These declines pushed the index back to its level of August 2016.

In Melbourne, the second largest market in Australia, the housing bust lags Sydney’s bust by about four months. According to the CoreLogic Daily Home Value Index, since the peak in November 2017, prices of all types of dwellings fell 7.2%, which pushed prices back to February 2017 levels: 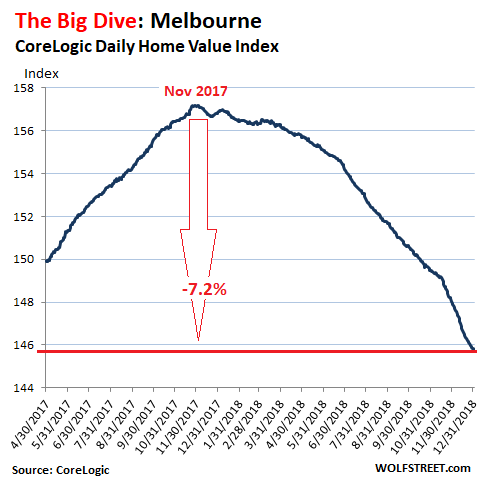 High-priced homes are on the chopping block: Prices in the most expensive quartile of the market dropped 11.2%; prices in the bottom quartile inched up 0.5%.

In the other capital cities in the year 2018: The housing bust pushed prices back to 2007 levels in Darwin and to 2009 levels in Perth, while prices gained in the remainder:

CoreLogic’s national home price index is down 5.2% from its October 2017 peak. Head of research Tim Lawless said in the report that this is a broad weakening in market that goes “well beyond the correction in Sydney and Melbourne.”

The increasingly steep price declines in Sydney and Melbourne can be blamed on the confluence of factors:

The construction boom is dousing the market with record new supply.

Exposure of the banks’ mortgage shenanigans, first in the media and eventually by the Royal Commission investigation, is putting a damper on said shenanigans, thus crimping mortgage lending.

Interest-only lending has tracked well below the recently discarded 30% limit, credit growth for investment purposes is virtually flat-lining and owner occupier credit growth slowed sharply over the second half of the year. Lenders are generally seeking out larger deposits from borrowers and have become much more forensic in detailing borrower expense profiles and servicing capacity.

Consumer sentiment has soured on real estate, not surprisingly, given the well-publicized drop in prices, after the years of you-cannot-lose-money-in-real-estate hype. CoreLogic cites the Westpac/Melbourne Institute Consumer Sentiment survey which showed that measures of housing sentiment were “pessimistic.”

Chinese investors got cold feet, after seeing prices drop. CoreLogic explained that “the substantial reduction in foreign buyer activity” and “a reduction in overseas migration” were among the factors “dragging market conditions down even further over the year.” And this in a housing market that has become desperately dependent on both – as many locals can no longer afford to buy at these prices.

Interestingly, all this is occurring as mortgage interest rates remain near historic lows, and as the policy rate (cash rate) of the Reserve Bank of Australia remains at its all-time low of 1.5%, where it has been since the last rate cut in August 2016. In other words, it’s not the central bank that has pricked this bubble.

45 comments for “The Housing Bust in Sydney & Melbourne, Oh My!”