And over the long term? It gets complicated, as they say.

For the year so far, the S&P 500 index is down 12.1%, gold is down 1.6%. For the past two years, the S&P 500, despite the huge volatility, is up 4.2%, and gold, also with some volatility, is up 9.7%. Moving in the same direction over these time frames, gold has been somewhat less effective as diversification, than it has been over the past three months. But as the chart below shows, its moves were not in lockstep with the S&P 500, and thus gold has helped counter-balance the erratic gyrations of the S&P 500 with its own erratic but different gyrations. Diversification can be messy: 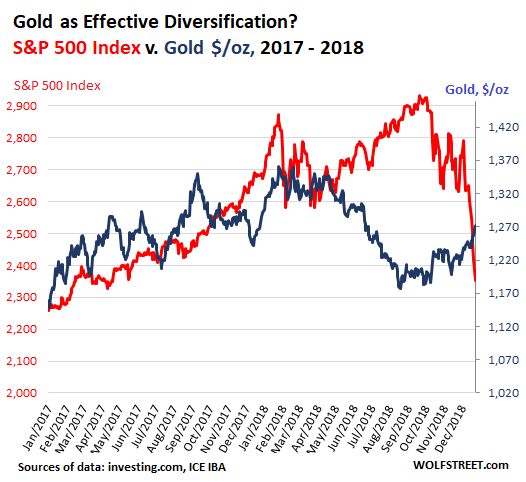 There are many reasons to trade or own gold. But here I focus on gold as diversification to the Everything Bubble and particularly to stocks – and how that panned out over the longer term.

Diversification is not possible among asset classes that move together. If for nine years all asset classes in your holdings rose together, no matter how good this feels, you’re not diversified.

Effective diversification means that some assets rise as others fall. But in the Everything Bubble, most asset classes rose together. And “well-diversified” investors were diversified only in their imagination, as they’re now finding out as nearly all asset classes have been falling in parallel.

Effective diversification comes with some costs, and it’s not risk free, but it provides some stability and lowers the overall risk of your holdings.

Cash always provides diversification in the sense of stability in addition to providing liquidity. But from 2009 through 2016, the return on cash – such as short-term Treasury bills, FDIC-insured CDs, or FDIC-insured high-yield savings accounts – has been near zero even as inflation ate away at its purchasing power.

But since interest rates started rising, cash generates better returns. This year, the yield on short-term Treasury bills, FDIC-insured CDs, or FDIC-insured high-yield savings accounts has beaten most other assets classes (to find those CDs and savings accounts, you need to shop around). They now yield between 2% and 3%. And when these instruments are held to maturity, there is no risk to the principal since they’re redeemed at face value.

Gold doesn’t offer a yield. And its price changes constantly. So the only return obtained from gold would be derived from an increase in price. And as long as that price moves in the opposite direction over the longer term from stock-market indices, gold provides effective diversification to stocks – even if it hurts, such as when stocks surge and gold plunges, which is what happened from late 2011 through 2016. 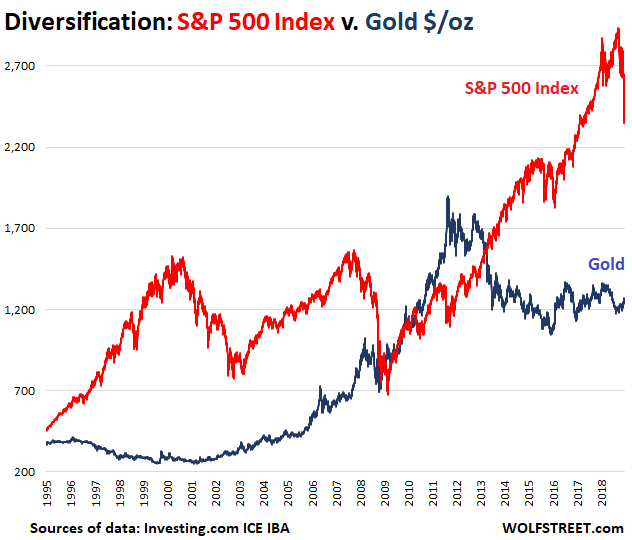 On September 24, which was before the S&P 500 began to plunge, I postulated that gold provided theoretical but not very appealing diversification to stocks. I wrote:

And when asset classes have risen together like this, it becomes very difficult to achieve diversification going forward – because now they’re at risk of all going down together.

My thoughts at the time were somewhat speculative since the S&P 500 was still surging. The chart I provided at the time was the long-term chart above, but it lacked the near-20% plunge of the S&P 500 since October 1 that the current chart shows. So in this instance, over those three months since then, gold has turned out to be a very effective diversification to stocks.

But the risk with gold remains: there is no guarantee that gold can’t also plunge, right along with the S&P 500. This is a real risk, and diversification might sound good, but when push comes to shove in a sell-off, it might not work. Nevertheless, given the difficulties of finding effective diversification in the Everything Bubble, other than cash, gold has shown it could do the job over the past three months – which largely mirrors its performance as diversification during the 2000-2002 crash and most of the 2008-2009 crash.

The Junk-Bond Market Just “Puked.” I discuss it on…  THE WOLF STREET REPORT