What do you do when nearly all asset classes are overvalued?

Diversification is one of the oldest principles by which people try to hang on to their wealth, however little they might have. Don’t put all your eggs in one basket, it goes. Diversification is not designed to maximize profits or minimize costs. It’s designed to get you through a smaller or larger fiasco, not necessarily unscathed but with at least some of your eggs intact so that you can go to market another day. This search for stability is a critical concept when looking at gold as diversification of risk in other asset classes.

There are many reasons to own or trade gold that are beyond the scope of my thoughts here on diversification. So I’ll leave them for another day.

The classic and most basic diversification for American households has been the triad of stocks, bonds, and real estate. In the past, it was often held that when stocks go up, bonds decline. This has to do in part with the Fed, which tends to raise rates when things get hot, thus driving up bond yields (which means by definition that bond prices decline). So stocks and bonds balanced each other out to some extent.

Throw in some leveraged real estate – the house you live in – and in the past, your assets were considered sufficiently diversified.

But this no longer applies today: Stocks, bonds, and real estate – both residential and commercial – all boomed together since the onset of QE in 2009. Other asset classes boomed to, including art and classic cars. Almost everything went up together in near lockstep. For a while, gold and silver, which had been on a surge since 2001 continued to surge. In other words, it was very difficult to achieve actual diversification.

It boils down to this: When all asset classes you own move together as they have in the Everything Bubble, you’re not diversified!

And when asset classes have risen together like this, it becomes very difficult to achieve diversification going forward – because now they’re at risk of all going down together.

So how does gold fit in?

Gold surged for a decade, peaked in 2011, and fell. Since 1995, the scope of the chart below, gold provided reasonable diversification to stocks, except for two years, from 2009 through 2011, when gold and stocks – as depicted by the S&P 500 index in the chart – moved in parallel (click on the chart to enlarge): 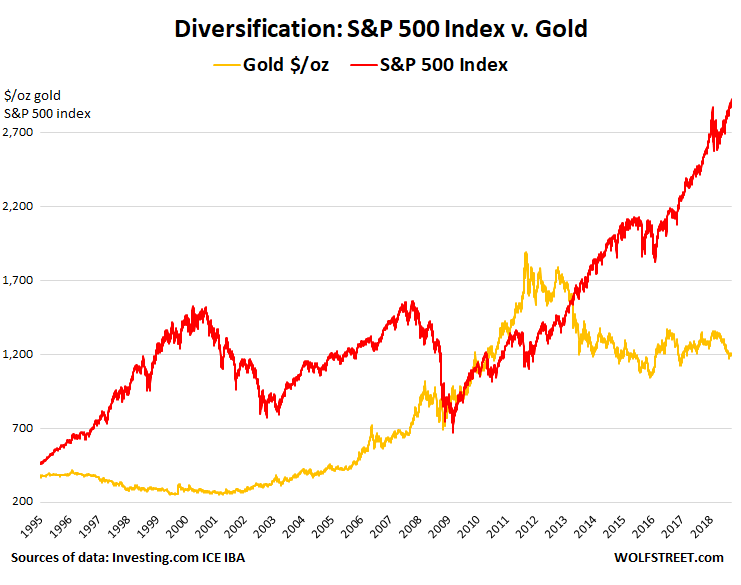 In the chart above, note that holding gold instead of stocks was a losing game from 1995 until 2008, but then stocks crashed, and gold was there as effective diversification. Then gold continued to surge for two more years, and people who owned gold loved it.

Properly functioning diversification is painful during good times. When one asset class surges, another should decline, giving some stability to the overall holdings, but also reducing performance during good times. This pain has been experienced by owners of gold since the peak in 2011, even as most other asset classes have soared.

Bonds are already heading lower, after their 35-year bull market. Stocks are perfectly primed for a long and complex downtrend. Many segments of commercial real estate and in many markets residential real estate are also primed for long downtrends. Other asset classes that make up the Everything Bubble are primed to head lower, or have already done so.

As we saw in 2009-2011, stocks, bonds, real estate, and gold can move together. At that time, they moved up together. Going forward they can move down together – because there is no guarantee that diversification actually works as planned!

Gold, nevertheless, remains mostly outside that lock-step dynamic, and there has only been temporary correlation between gold and most asset classes since 1995. So theoretically, gold offers diversification.

Yet gold cycles are very long: Gold stayed below its 1980 peak for 20 years until 2001. And we’re only seven years into the current down-cycle. So there is no guarantee that gold will turn around and surge, or even remain flat, when the Everything Bubble is starting to deflate asset class by asset class. Which shows just how difficult it will be, after nine years of rampant asset price inflation, to achieve functional diversification.

Why are gold and silver price trends so long and so big — both, up and down? Read…  My Theory about Gold and Silver for Long-Term Investors

131 comments for “Gold in the “Everything Bubble”: Effective Diversification?”