Seattle’s historic spike falters. New York condo prices back where they were last Sept. House-price bubbles in other metros get even more splendid.

Home prices in the US surged 6.0% in July compared to a year ago (not seasonally-adjusted), and 0.4% compared to June, according to the S&P CoreLogic Case-Shiller National Home Price Index released this morning. The index is now 11.2% above the July 2006 peak of the first housing bubble in this millennium, “Housing Bubble 1,” which was called a “healthy” housing market during it, and was called “bubble” and “unsustainable” only after its collapse. However, collective memory changes, and now, this peak of the collapsed bubble has become the new-normal base of what is once again a “healthy” housing market. The index has surged 53% from the bottom of “Housing Bust 1”: 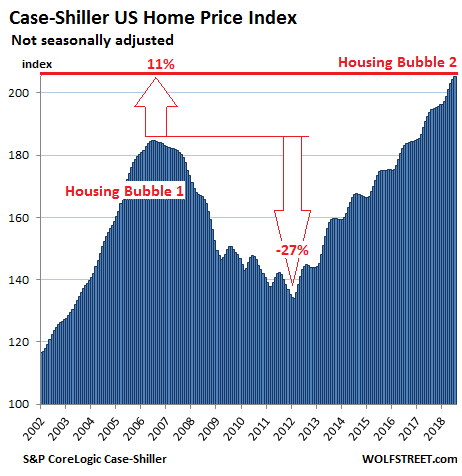 In some of the hot local housing markets, indications are starting to accumulate that fundamentals are deteriorating: declining sales, rising inventories, reduced asking prices, increasing number of days on the market, and the like — for example, in the Bay Area county of Sonoma. But there are few signs yet that any deteriorating fundamentals have impacted the bubbliest markets as depicted by the Case-Shiller Home Price index, with the exception New York’s condo situation and the suddenly halted spike in Seattle.

The Case-Shiller Index is a rolling three-month average; today’s release is for May, June, and July. The index is based on “home price sales pairs.” It compares the sales price of a home in the current month to the last transaction of the same home years earlier. The index incorporates other factors and uses algorithms to arrive at each data point. It was set at 100 for January 2000; an index value of 200 means prices as figured by the index have doubled. The index does not say anything about absolute dollar-price levels. As such, it is very different from alternative measures, such as “median” prices that are often cited.

The index is not inflation adjusted. It’s itself a measure of inflation — not consumer price inflation but asset price inflation, specifically home-price inflation. It shows to what extent the dollar is losing purchasing power with regards to buying the same home over time.

Home prices in the Boston metro jumped 6.0% from a year ago, according to the Case-Shiller Home Price Index. During Housing Bubble 1, from January 2000 to October 2005 in Boston, the index soared 82% before dropping. It now exceeds that crazy peak by 18.7%: 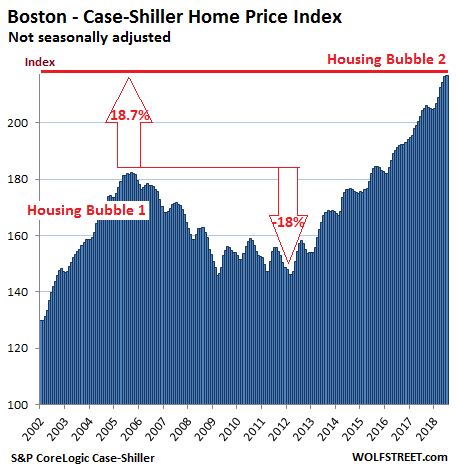 Home prices in the Seattle metro did the unthinkable and unspeakable, after a historic spike: They edged down a tiny bit in July from June. This is interesting not because of the size of the decline (it’s small), but because of the fact that price increases were the norm in every July through 2011. July should be a seasonally strong month. But not this year. So the wait has started for confirmation of the inflection point. Over the past 12 months, the index has jumped 12.0% and is up 35% from the peak of Seattle’s crazy Housing Bubble 1 (July 2007): 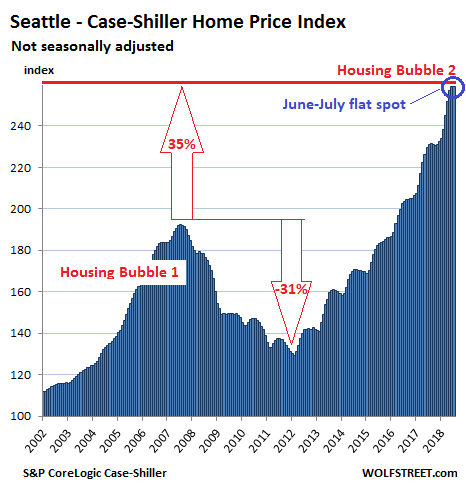 Home prices rose 0.3% in July on a monthly basis, according to the Case-Shiller index for the Denver metro, the 33rd monthly increase in a row. The index is up 8.0% from a year ago and 55% from the peak in July 2006: 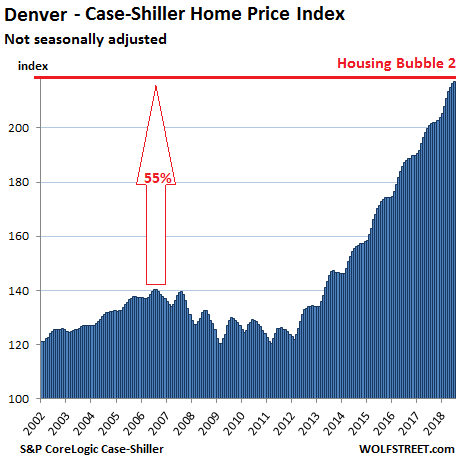 Home prices in the Dallas-Fort Worth metro rose for the 54th month in a row in July, and are up 5.0% from a year ago, according to the Case-Shiller index. Since its peak during Housing Bubble 1 in June 2007, the index has surged 48%: 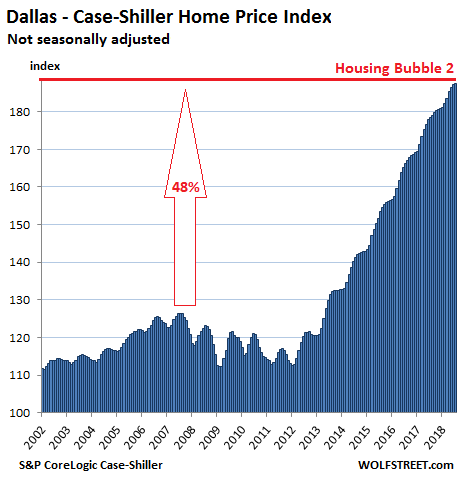 Home prices in the Atlanta metro rose 0.5% in July from June, according to the Case-Shiller index, and 5.8% over the 12-month period. They now exceed the peak of Housing Bubble 1 in July 2007 by 8%: 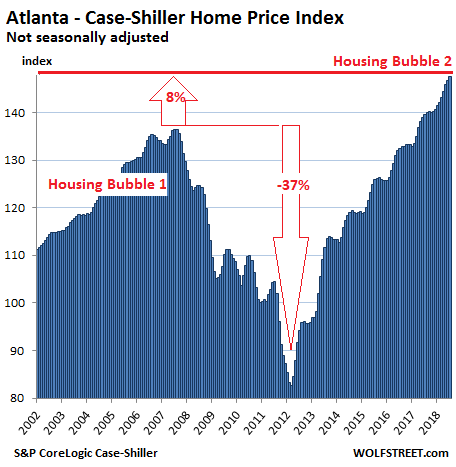 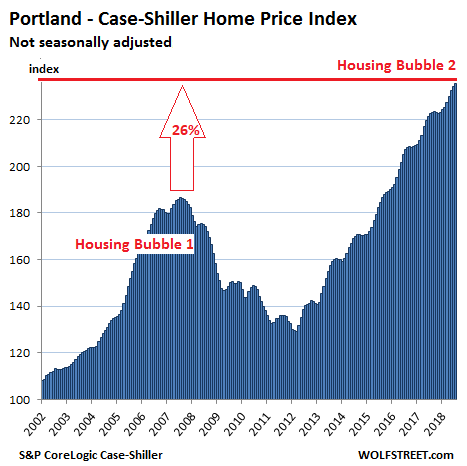 The Case-Shiller index for “San Francisco” includes five counties: The city/county of San Francisco, the northern part of Silicon Valley (San Mateo County), part of the East Bay (the counties of Alameda and Contra Costa), and part of the North Bay (Marin County). In July, the index rose 0.6% from the prior month and 10.8% from a year ago. It’s up 41% from the crazy peak of Housing Bubble 1 and up 170% since 2000: 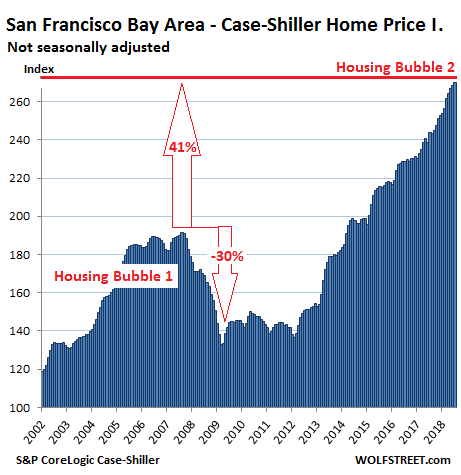 The Case-Shiller index for the Los Angeles metro edged up in July and rose 6.4% year-over-year. Between January 2000 and July 2006, the index had skyrocketed 174% before its majestic collapse. The index now exceeds the crazy sugar-loaf peak of Housing Bubble 1 by 3%: 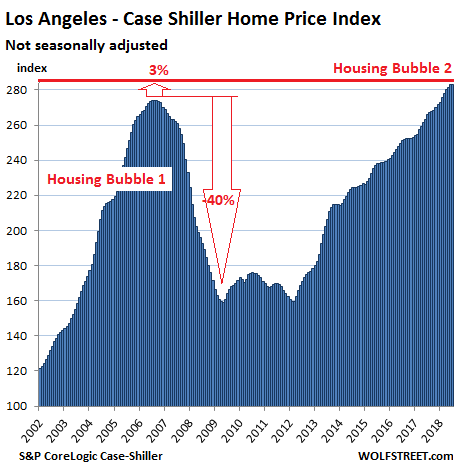 Condo prices in the New York City metro edged up 0.5% from the prior month, after three months in a row of declines, according to the Case-Shiller condo index. Prices have dropped 1.5% from the peak in March, are nearly flat year-over-year (up only 0.47%), and are at the lowest level since September 2017. For confirmation that this dip in condo prices is a visible sign of a deflating housing bubble on this list of the most splendid housing bubbles in America, we need confirmation in form of a year-over-year decline, for example, with the index value for August coming in lower than August last year. Until then, it’s too early to speak of a trend even if it’s starting to look like one: 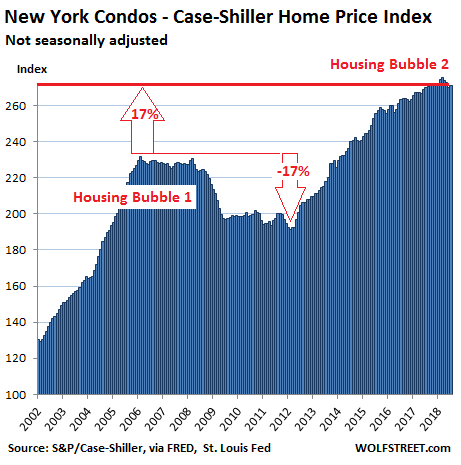 The above charts are representations, based on Case-Shiller data, of the most splendid housing bubbles in America. The index covers other cities that have not yet reached prior bubble highs, such as Miami and Las Vegas, and so these cities don’t yet fit into the theme of this series.

But the Case-Shiller data does not cover many cities whose home prices have completely blown through the roof, so to speak, such as the Nashville metro, whose home prices, according to the Federal Housing Financing Agency’s different methodology, have skyrocketed 45% above the peak of Housing Bubble 1. By any standard, the Nashville metro, and other metros like it, should be included in this list of the most splendid housing bubbles, but the publicly available Case-Shiller data does not cover them. So don’t feel disappointed if your splendid bubble-metro is not on this list.

115 comments for “The Most Splendid Housing Bubbles in America”