In San Francisco, the median price of single-family house sales that closed in November fell to $1.435 million. This is down a blistering $265,000 or 15.5% from the crazy peak in February of $1.7 million – a time when only the sky was the limit. And down by $60,000 from November 2017. This puts the median house price below where it had first been in May 2017. Note the steep slope from the peak in February: 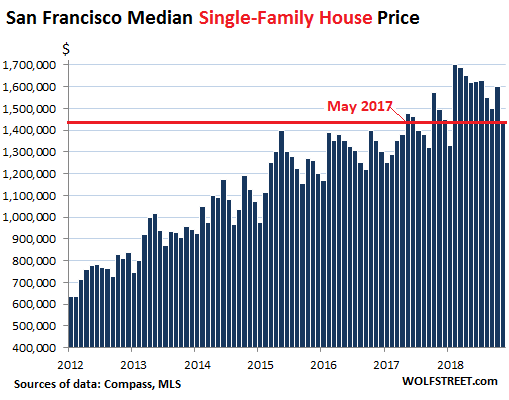 Median price means half of the homes sold for more, half sold for less. So on the bottom end, people can try to push their luck with an occasional small shack in the $800,000 range. All data via Patrick Carlisle, Chief Market Analyst at Compass.

About 53% of total sales in San Francisco were condos; for years, all new housing construction has been condos and apartments, with practically no single-family houses being built, resulting in ever greater population density – and an increasing share of condos in the sales mix.

The median price of condos whose sales closed in November dropped to $1.2 million (also includes the few sales in TIC or Tenancy in Common buildings). While that still sounds like a ludicrously huge amount for a median condo – something like a small-ish two bedroom without anything spectacular – the price is down $50,000 from the peak in March, April, and May, and down $30,000 from November 2017: 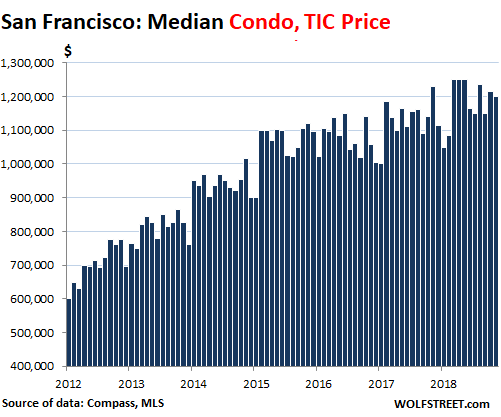 Data for condo sales represent actual sales that closed and were reported to the MLS (Multiple Listing Services) where brokers list properties. However, these sales do not include the sales of new-built condos that developers sell through their own sales offices. A lot of condos have been built recently, and a lot more are in the pipeline. But developers don’t list them with the MLS and don’t report sales and prices to the MLS. 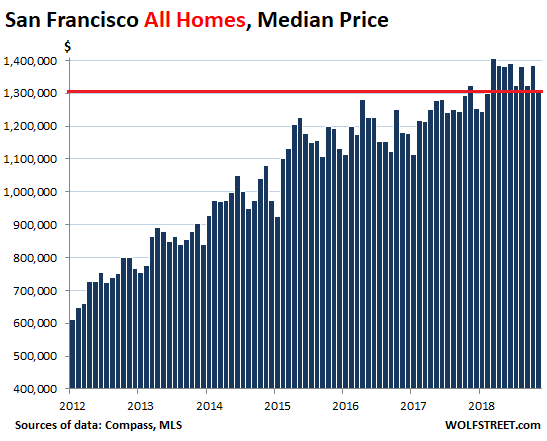 Clearly, the sky is not the limit for home prices in San Francisco, but the sky is not yet falling either. These are just relatively minor price declines in volatile data of one of the biggest real estate bubbles the US has ever seen.

Sales volume for all types of dwellings combined fell 14% in November, compared to a year ago, to 444 homes.

But the Bay Area economy is still hopping, and companies are still hiring. The classic and inevitable tech bust that everyone who has been around here long enough is expecting hasn’t arrived yet. And this downturn in housing is taking off in a very strong local economy.

Homebuilder Toll Brothers just said it out loud. Read…  Why California’s Housing Market is in for Serious Trouble