In the third quarter, the “delinquency rate” on credit-card loan balances at commercial banks other than the largest 100 banks – so the delinquency rate at the 4,705 smaller banks in the US – spiked to 6.2%. This exceeds the peak during the Financial Crisis for these banks (5.9%).

The credit-card “charge-off rate” at these banks, at 7.4% in the third quarter, has now been above 7% for five quarters in a row. During the peak of the Financial Crisis, the charge-off rate for these banks was above 7% four quarters, and not in a row, with a peak of 8.9%

These numbers that the Federal Reserve Board of Governors reported Monday afternoon are like a cold shower in consumer land where debt levels are considered to be in good shape. But wait… it gets complicated.

In other words, the overall banking system is not at risk, the megabanks are not at risk, and no bailouts are needed. But the most vulnerable consumers – we’ll get to why they may end up at smaller banks – are falling apart: 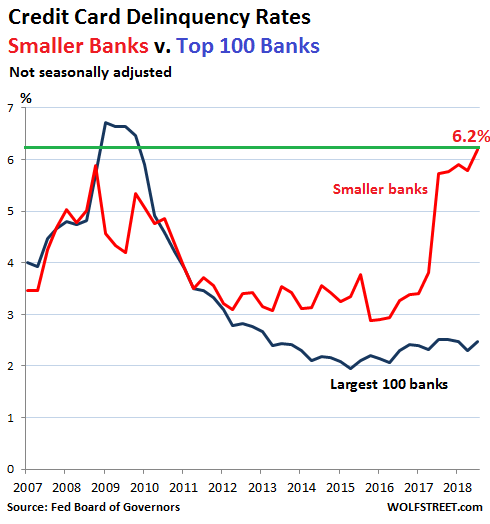 So how low is the banks’ cost of funding? For example, in its third-quarter regulatory filing with the SEC (10-Q), Wells Fargo disclosed that it had $1.73 trillion in total “funding sources.” This amount was used to fund $1.73 trillion in “earning assets,” such as loans to its customers or securities it had invested in.

In addition to its deposits, Wells Fargo lists $353 billion in other sources of funding – “short-term and long-term borrowing” – such as bonds it issued.

For all sources of funding combined, so on the $1.73 trillion, the “total funding cost” was 0.87%. Nearly free money. Rate hikes no problem.

So, with its cost of funding at 0.87%, and the average interest rate of 12.77% on its credit card balances, Wells Fargo is making an interest margin on credit cards of 11.9 percentage points. In other words, this is an immensely profitable business – hence the incessant credit-card promos.

With credit cards, the US banking system has split in two.

The largest banks can offer the most attractive incentives on their credit cards (cash-back, miles, etc.) and thus attract the largest pool of applicants. Then they can reject those with higher credit risks – having not yet forgotten the lesson from the last debacle.

The thousands of smaller banks cannot offer the same incentives and lack the marketing clout to attract this large pool of customers with good credit. So they market to customers with less stellar credit, or with subprime-rated credit — and charge higher interest rates. 30% sounds like a deal, even if the customer will eventually buckle under that interest rate and will have to default.

That’s why banks take the risks of higher charge-offs: They’re getting paid for them! But at some point, it gets expensive. And if it takes a smaller bank to the brink, the FDIC might swoop in on a Friday evening and shut it down. No biggie. Happens routinely.

The real problem with credit cards isn’t the banks – credit card debt is not big enough to topple the US banking system. It’s the consumers, and what it says about the health of consumers.

The overall numbers give a falsely calming impression. Credit card debt and other revolving credit has reached $1.0 trillion (not seasonally adjusted). This is about flat with the prior peak a decade ago.

Since the prior peak of credit-card debt in 2008, the US population has grown by 20 million people, and there has been a decade of inflation and nominal wage increases, and so the overall credit card burden per capita is far lower today than it was in 2008 (though student loans and auto loans have shot through the roof). So no problem?

But this overall data hides the extent to which the most vulnerable consumers are getting into trouble with their credit cards, having borrowed too much at usurious rates. They’ll never be able to pay off or even just service those balances. For them, there is only one way out – to default.

The fact that this process is now taking on real momentum — as demonstrated by delinquency rates spiking at smaller banks — shows that the group of consumers that are falling apart is expanding. And these are still the good times, of low unemployment in a growing economy.

Retail sales, when adjusted for inflation, are not so hot these days, rising only 2.0% in October, at the lower end of the post-Financial Crisis range. E-commerce is piping hot. But sales at the stores that populate malls are dismal. Read…. Mall Retailers Melt Down in Four Charts

67 comments for “Subprime Rises: Credit Card Delinquencies Blow Through Financial-Crisis Peak at the 4,705 Smaller US Banks”