It gets serious. Margin calls?

No one knows what the total leverage in the stock market is. But we know it’s huge and has surged in past years, based on the limited data we have, and from reports by various brokers about their “securities-based loans” (SBLs), and from individual fiascos when, for example, a $1.6 billion SBL to just one guy blows up. There are many ways to use leverage to fund stock holdings, including credit card loans, HELOCs, loans at the institutional level, loans by companies to its executives to buy the company’s shares, or the super-hot category of SBLs, where brokers lend to their clients. None of them are reported on an overall basis.

The only form of stock market leverage that is reported monthly is “margin debt” – the amount individual and institutional investors borrow from their brokers against their portfolios. Margin debt is subject to well-rehearsed margin calls. And apparently, they have kicked off.

In the ugliest stock-market October anyone can remember, margin debt plunged by $40.5 billion, FINRA (Financial Industry Regulatory Authority) reported this morning – the biggest plunge since November 2008, weeks after Lehman Brothers had filed for bankruptcy: 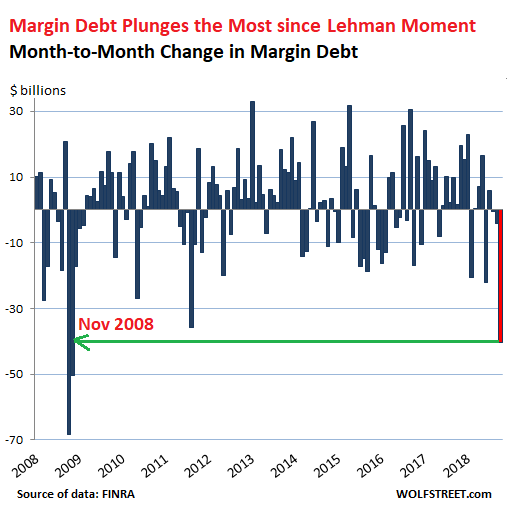 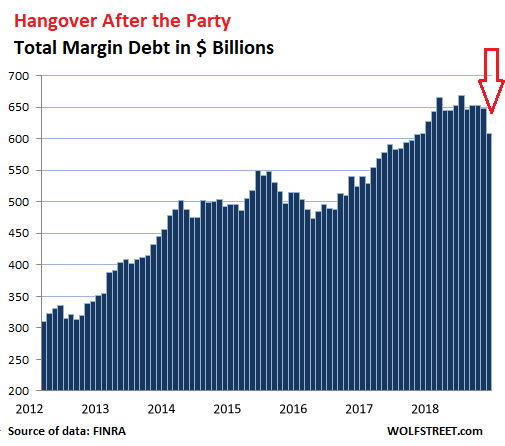 In the two-decade scheme of things, the relationship between stock market surges and crashes and margin debt becomes obvious.

Back during the dot-com bubble, dot-com stocks, traded mostly on the Nasdaq, included what today are booming survivors like Amazon [AMZN], barely hangers-on like RealNetworks [RNWK], or goners like eToys.

At the time, these stocks soared by stunning amounts, and people, such as myself, used margin debt, to enhance their returns. When stocks plunged, the margin calls came, and these people had to sell their holdings into an illiquid and plunging market. They ended up selling their best and most liquid stuff first and watched their trash get trashed further.

When it was over by October 2002, the Nasdaq had plunged 78%. Over the same period, margin debt plunged 54%. A similar scenario played out during the Financial Crisis crash. And now we have the “Everything Bubble” to deal with: 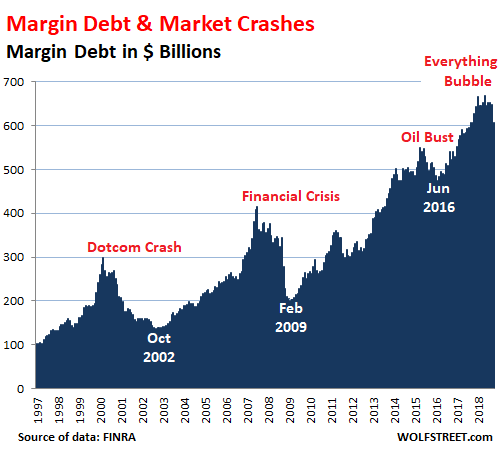 Surging margin debt creates stock-market liquidity out of nothing, and this new liquidity is used to buy more stocks. In this manner, rising margin debt is the great accelerator on the way up.

When prices on individual stocks drop sharply – even as the S&P 500 index might decline at a moderate pace – investors, including hedge funds, with margin debt and concentrated holdings in these stocks may find that their portfolio has taken enough of a hit to where they get margin calls.

But this money from those stock sales doesn’t go into other stocks or another asset class, and it doesn’t sit at the “sidelines” waiting to jump in again at the next dip. Nope, it is used to pay down margin debt. And thus, this liquidity just evaporates without a trace.

October’s plunge in margin debt was just the beginning, a little dimple in the overall chart. Unwinding such a huge pile of margin debt and overall stock-market leverage takes time, years, and they’ll be interrupted with some brief increases that’ll make everyone feel better for a moment.

It gets costly when the entire market depends on a handful of over-hyped mega-caps. Read…  FANGMAN Stocks Plunge 4.4% Today, Down $905 Billion, or 20%, since Aug. 31