Mortgage rates are climbing faster than the 10-year Treasury yield.

The average interest rate for 30-year fixed-rate mortgages with conforming loan balances ($453,100 or less) and a 20% down-payment rose to 5.17% for the latest reporting week, according to the Mortgage Bankers Association (MBA) today. This is the highest average rate since September 2009 (chart via Investing.com):

Many people with smaller down payments and/or lower credit ratings are already paying quite a bit more. Top-tier borrowers pay less.

Thus, mortgage rates have moved a little closer to the next line in the sand, 6%, which is still historically low. At that point, the interest rate would be back where it had been in December 2008, when the Fed was unleashing its program of interest rate repression even for long-dated maturities via QE that later included the purchase of mortgaged-backed securities (MBS), which helped push down mortgage rates further.

Now the Fed is shedding Treasury securities and mortgage-backed securities, and we’re starting to see the impact on mortgage rates: The difference (spread) between the 10-year yield and the interest rate of the average 30-year fixed-rate mortgage has widened sharply.

Since the beginning of the year:

In other words, mortgage rates are climbing faster than the 10-year Treasury yield, now that the Fed has begun the shed mortgage-backed securities. This is expected. It’s part of the QE unwind – it’s part of the Fed exiting the mortgage market and pulling its support out from under it. 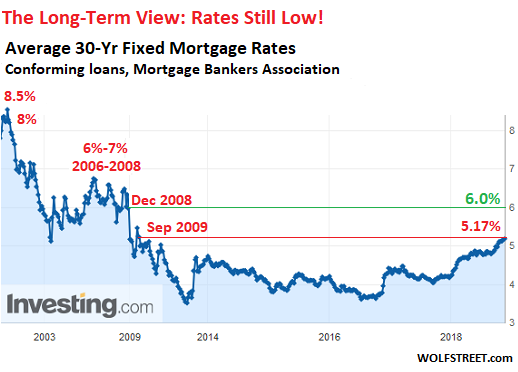 Home prices as a whole averaged out across the US have surged 11.5% above the crazy peak of Housing Bubble 1:

Even current mortgage rates – as low as they still are, historically speaking – are having an impact on the housing market and are putting pressure on it at the margin, with some potential buyers being locked out and others scared off as they’re finding today’s inflated home prices don’t mix well with even slighter higher mortgage rates: What was barely affordable for them, with a good amount of stretching, has become unaffordable.

And the cooling effect is already becoming visible in the first data sets for some of the previously hottest markets [Declines Hit the Most Splendid Housing Bubbles in America].

But for real pain to set in, the average 30-year fixed rate mortgage would need to get closer to 6%. This is likely the pain-threshold for the housing market. 6% will block enough potential buyers from buying at current prices to where sellers will have serious trouble selling their homes unless prices drop enough.

The cure for this market will be lower prices – even if it means rising defaults and considerable problems among mortgage lenders, particularly the non-bank lenders (the “shadow banks”) that have very aggressively moved into the mortgage market over the last few years. Quicken Loans has now become the largest mortgage lender in the US, ahead of Wells Fargo. These shadow banks are less regulated and have taken more risks than the banks. The Fed is already worried about them but worrying is all it can do since it doesn’t regulate them.

So when will the mortgage market get to the pain threshold of 6%? Given that the spread between the 10-year Treasury yield is widening, and that therefore mortgage rates will rise faster than the 10-year yield, and that the yield curve will remain relatively flat but won’t invert, there is a strong likelihood that 6% is only about three rate hikes away – and that will likely be accomplished by mid-2019.

116 comments for “Mortgage Rates May Hit 6% Sooner, as Fed Sheds Mortgage-Backed Securities, But What Will that Do to Housing Bubble 2?”