The “up to” exacts its pound of flesh.

Over the four-week period from October 3 through October 31, the Federal Reserve shed $35 billion in assets, according to the Fed’s weekly balance sheet released Thursday afternoon. This brought the balance sheet to $4,140 billion, the lowest since February 12, 2014. Since October 2017, when the Fed began its QE unwind, or “balance sheet normalization,” it has now shed $321 billion: 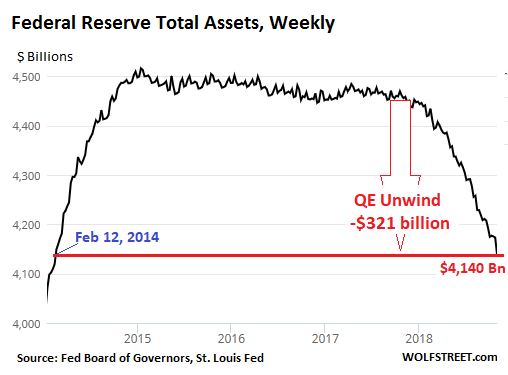 The Fed acquired Treasury securities and mortgage-backed securities (MBS) as part of QE, which ended in 2014. Between the end of QE and the beginning of the QE Unwind in October 2017, the Fed replaced maturing securities with new securities to keep their levels roughly the same. In October last year, the Fed kicked off the QE unwind and began shedding those securities. But the balance sheet also reflects the Fed’s other activities, and the amount of its total assets is always higher than the sum of Treasury securities and MBS it holds.

From October 3 through October 31, the Fed’s holdings of Treasury Securities fell by $23.8 billion to $2,270 billion, the lowest since February 19, 2014. Since the beginning of the QE-Unwind, the Fed has shed $195 billion in Treasuries: 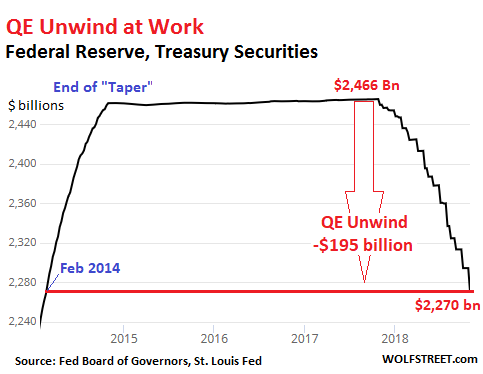 The “up to” exacts its pound of flesh

The plan calls for shedding “up to” $30 billion in Treasury securities in October. But the Fed shed only $23.8 billion. Why?

When the Fed sheds Treasury securities, it doesn’t sell them outright but allows them to “roll off” when they mature, which is when the Treasury Department sends money to all holders of those maturing bonds to redeem those bonds at face value. Treasuries mature mid-month or at the end of the month. This creates the step-pattern of the QE unwind in the chart above.

On October 15, no Treasury securities matured. On October 31, three security issues in the Fed’s holdings matured, totaling $23 billion. Those were allowed to “roll off” entirely without replacement. In other words, the Treasury Department paid the Fed $23 billion for them.

But this was $7 billion below the “cap.” And it will happen again. But not in November. In November, about $59 billion in Treasuries will mature. If the Fed follows the plan with the “up to” cap of $30 billion, it will let $30 billion “roll off” and will replace the remaining $29 billion with new securities from the Treasury Department.

But in December, only $18 billion in Treasuries will mature. And that’s all the Fed will let roll off. This will play out many times going forward, unless the Fed changes its strategy, which it can if it wants to.

As part of QE, the Fed acquired residential MBS that were issued and guaranteed by Fannie Mae, Freddie Mac, and Ginnie Mae. Holders of residential MBS receive principal payments as the underlying mortgages are paid down or are paid off. At maturity, the remaining principal is paid off. To keep the balance of MBS from declining after QE ended, the New York Fed’s Open Market Operations kept buying MBS in the market.

The Fed books the trades at settlement, which occurs two to three months after the trade. Due to this lag, the Fed’s balance of MBS at the end of October reflects trades in June through August. For October, the “up to” cap for shedding MBS was $20 billion. But at the time of the trades, in June the cap was $12 billion; and in July, it increased to $16 billion. 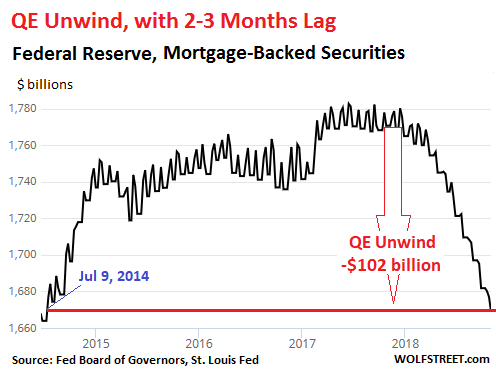 So how does the QE unwind drain money from the market?

The Fed creates money, and it destroys money. But it doesn’t sit on trillions of dollars in a cash account.

People have tried to figure out how to trade this. But there is not a specific day when the Fed’s QE Unwind drains tens of billions of dollars from the market. The drains runs from the bond market through Treasury auctions and then the Treasury Department’s cash account to the Fed. Throughout the process, the timing of the drainage gets disbursed – as does the impact on the markets.