But ballooning inventories point at risks next year.

If stock market pundits were hoping for a disappointing GDP print today that would give the Fed second thoughts about its rate-hike path, they didn’t get it. The economy, as measured by GDP, is hopping right along, not at an extraordinary never-before-seen speed, but at a very good clip.

Third-quarter “real” GDP (adjusted for inflation) increased at a seasonally adjusted annual rate of 3.5% from the prior quarter, the Bureau of Economic Analysis reported today. Annual rate means that if GDP continues to increase for four quarters in a row at the current rate, the 12-month GDP growth would be 3.5%, the eighth fastest since the Great Recession, and down slightly from the Q2 rate of 4.2%: 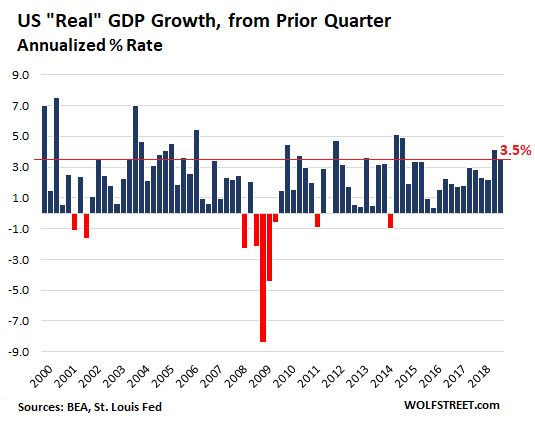 The above measure of “real” GDP – the change from prior quarter, but at an annualized rate – is the most volatile measure, producing the biggest-looking results, both up and down (note the 8.4% plunge in Q4 2008). No other major country I know of uses this measure for that reason.

A less volatile measure and producing less big-looking results, up and down, is the 12-month change in “real” GDP, which the BEA’s data set also provides. This is the inflation adjusted, seasonally adjusted rate of GDP growth over the past 12 months. It’s the measure used by the Fed in its discussions of the economy and in its “projections,” such as those from the last meeting. For the 12 months ending in Q3, it rose 3.0%, the fourth highest growth rate since 2010: 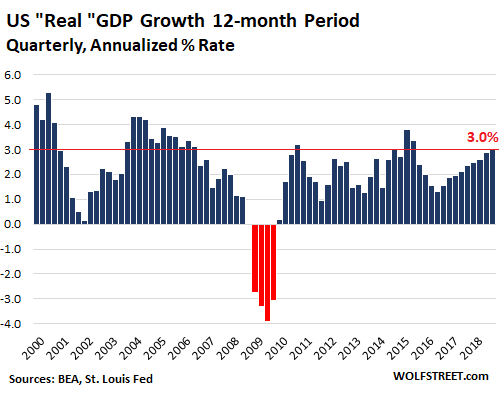 Nominal GDP (or “current dollar” GDP), which is not adjusted for inflation, rose 5.5% over the past 12 months, the highest growth rate since Q4 2006. In these current dollar terms, the size of the US economy, as measured by spending, reached $20.66 trillion a year.

This data is the BEA’s “advance estimate” to be revised several times as more data for Q3 accumulates. The next revision will be released on November 28 (“second estimate”).

The BEA outlines some factors that contributed to GDP growth:

And it outlined some factors that subtracted from GDP growth:

Overall, it was a strong report on the US economy, even if it backed off a smidgen from the blistering pace in Q2.

A worrisome element in it is the continued buildup of inventories. While this adds to GDP mathematically, it can have a negative effect on GDP in the future when businesses are beginning to whittle down those inventories.

The US economy went through this cycle in 2014 and early 2015 with a large buildup of inventories. Eventually, businesses began whittling them down by reducing their orders. This caused a recession in the goods-based sector, including a very visible “transportation recession” (see the red bars in the charts) that brought GDP growth down to 1.6% in 2016. GDP growth was kept in positive territory by the massive US service sector that continued to grow strongly at the time.

This cycle in the goods-based sector will play out again, possibly starting sometime next year. And as last time, the service sector will have to be strong enough to prevent a recession