They’re a measure of the goods-based economy.

Freight shipment volume across all modes of transportation – truck, rail, air, and barge – rose 8.2% in September, compared to a year earlier, according to the Cass Freight Index. While this is still a big jump, it’s down from the five double-digit increases earlier this year. The index covers merchandise for the consumer and industrial economy but does not include bulk commodities, such as grains or chemicals.

The chart below shows how the index changed from the same month a year earlier. Note the notorious cyclicality of the business, the peak increase in January of 12.5%, and the trend since then. Growth in shipments continues to be strong, indicating a strong goods-based economy, but that growth is leveling off somewhat: 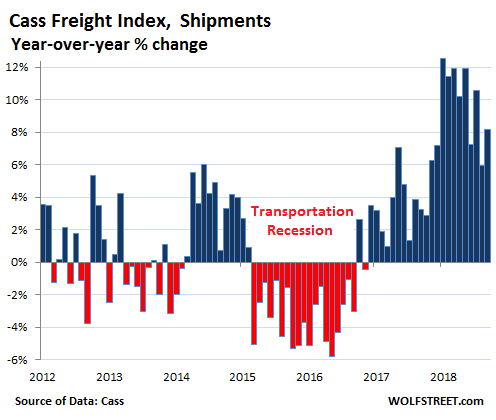 This blistering boom in early 2018 may have run its course, with growth in shipments still strong, but showing the first signs of leveling off. At the same time, trucking capacity-constraints, while still an issue, are abating.

The DAT Dry Van Barometer, cited in the Cass report, tracks demand for van trailers compared to available capacity. It highlights the cyclicality in the business, including the “transportation recession” in 2015 and 2016. The horizontal blue line (50) indicates equilibrium between demand for vans and capacity. Values above the line indicate demand exceeds capacity. Demand-capacity imbalances drive pricing power (click to enlarge): 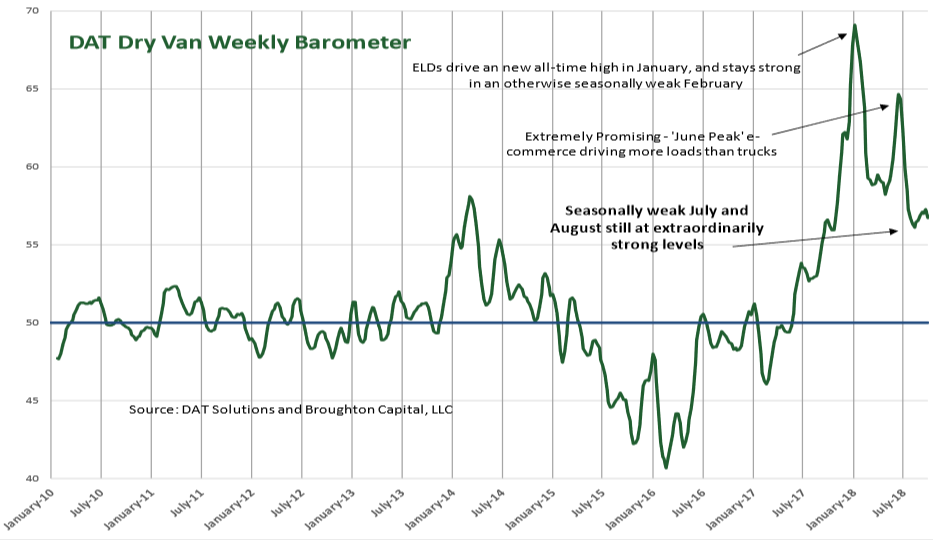 Demand from the industrial sector shows up in demand for flatbed trailers that haul equipment and supplies for manufacturing, oil-and-gas drilling, construction, etc. As demand for flatbed trailers surged late last year capacity suddenly tightened in January in part due to the required use of Electronic Logging Devices (ELDs), and the DAT Flatbed Monthly Barometer, cited by Cass, spiked to historic highs. But the demand-capacity imbalances are now abating (click to enlarge): 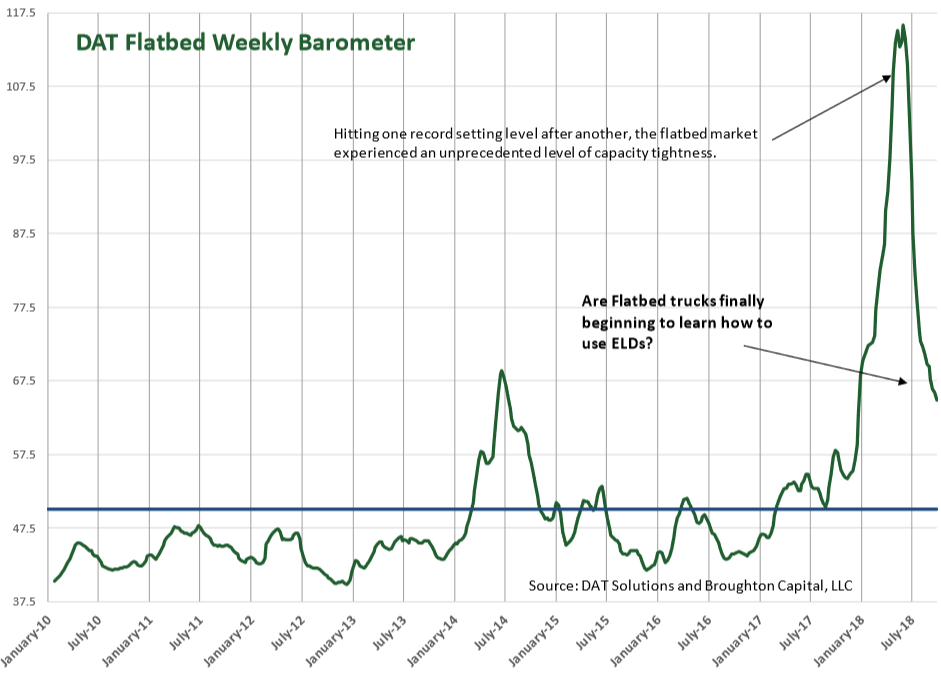 In terms of rail, the Association of American Railroads reported that US railroads originated only 2.6% more carloads in September than a year earlier, but Intermodal traffic – containers and piggybacked trailers – rose 6.2%.

Only portions of the price increases are related to fuel costs. The average price of diesel at the pump, according to EIA data, at $3.39, is up 22% from a year ago, and truckers are clearly able to pass on these higher fuel prices: 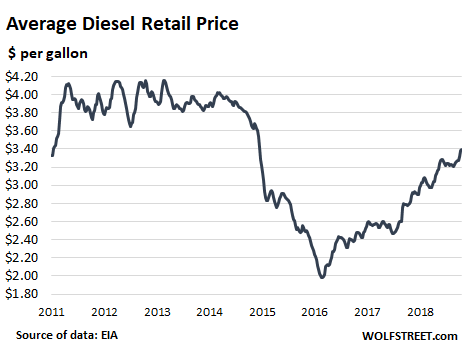 That factors other than fuel prices are involved in rate increases is highlighted by the Cass Truckload Linehaul Index, which tracks per-mile full-truckload pricing, and does not include fuel or fuel surcharges: it rose 9.8% in September, backing off the biggest year-over-year increase in the data going back to 2005: 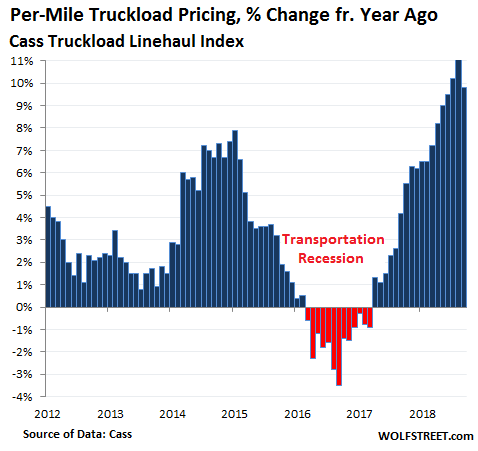 The Cass Intermodal Price Index, which includes fuel prices and fuel surcharges, rose 10.1% in September compared to a year ago, the 24th month in a row of year-over-year increases. The backtracking from the prior months was not much of a consolation for shippers, whose margins get squeezed by these prices unless they can pass it on to the next guy: 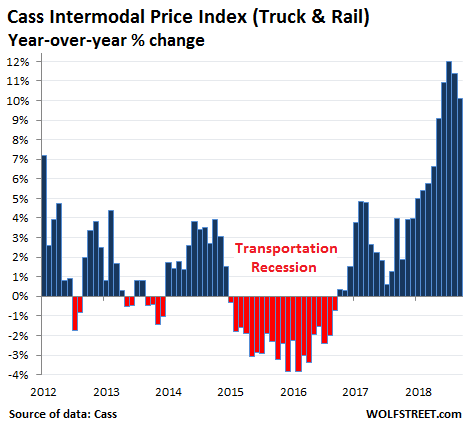 The total amount companies spent on shipping their merchandise via all modes of transportation – this is a result of higher shipment volumes at higher prices – surged 19.3% year-over-year in September, the biggest such increase since January 2012, and the 12th double-digit jump in a row, according to the Cass Freight Expenditures index. 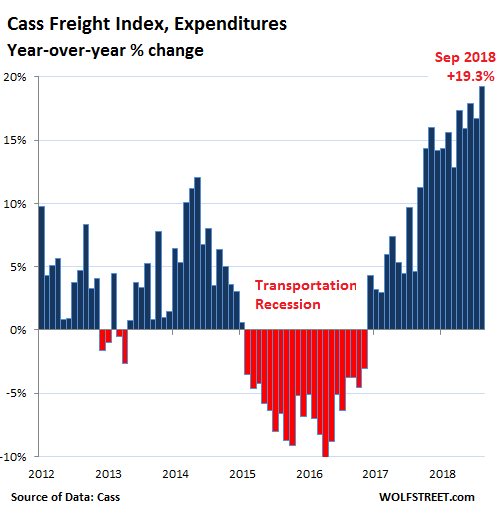 In September, it became clearer that the exponential increases earlier this year could not last. But demand remains strong, and capacity remains tight, just slightly less so than before.

Over the summer, and earlier this year, trucking companies have ordered record numbers of class-8 trucks. In September, the order numbers, while still strong, fell sharply off these records. This is why the trucking business is so cyclical – and you can see it coming. Read…  Signs that the Trucking Boom Has Peaked