And now the biggest boom of all.

The Nasdaq has dropped 8% from its intraday high on October 1, and now the real estate industry in the San Francisco Bay Area has its collective eyes fixed on it because there is an uncanny dependency on tech stocks.

The cause-and-effect relationship between tech-stock prices and real estate in San Francisco is not perfectly agreed-upon. One thing is sure: when the Nasdaq surges for an extended period of time, office rents shoot sky-high, and when the Nasdaq plunges, office rents plunge along with it. But when it comes to home prices, it’s complicated, as they say.

We’ll start with the relationship between the Nasdaq and home prices as measured by the S&P CoreLogic Case-Shiller Home Price Index for “San Francisco.” The Case-Shiller covers house prices (not condo prices) in the five Bay Area counties of San Francisco, San Mateo (northern part of Silicon Valley), Alameda and Contra Costa (both in the East Bay) and Marin (North Bay). This area is home to a lot of tech companies and near a lot of other tech companies in the South Bay.

As a reminder for those who’ve graciously forgotten: The Nasdaq plunged 76% from that bubble peak to 1,192 by July 2002, and as measured from that low, has since soared 524%, but remains far behind the home-price increases.

This chart shows the monthly Nasdaq ranges (black) and the Case-Shiller index for “San Francisco.” The horizontal fat blue line depicts the starting point for both: 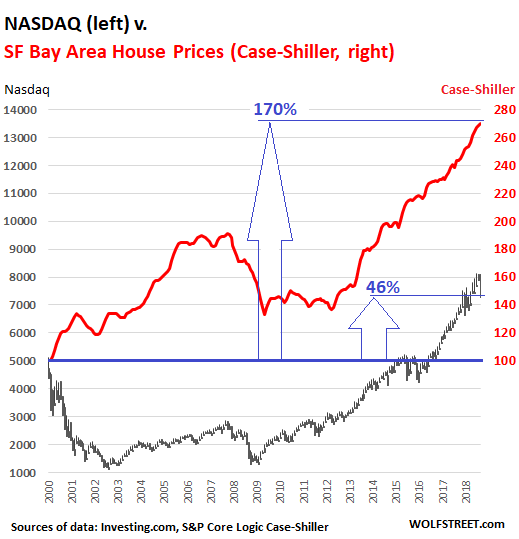 In the year 2000 and in early 2001, the Case-Shiller index soared 34%, still boosted by the Nasdaq gains of pre-March 2000 and the hope that the tech-stock collapse was just a regular sell-off. Also, the Case-Shiller, by the way it is designed, lags several months behind actual home price changes.

But by mid-2001, both headed south together, with the Case Shiller dropping 12% over the next 12 months.

At the end of 2007, both headed south together: the Nasdaq plunged 53%. The Case-Shiller plunged 30% from super-lofty highs.

There are other standouts from the chart: 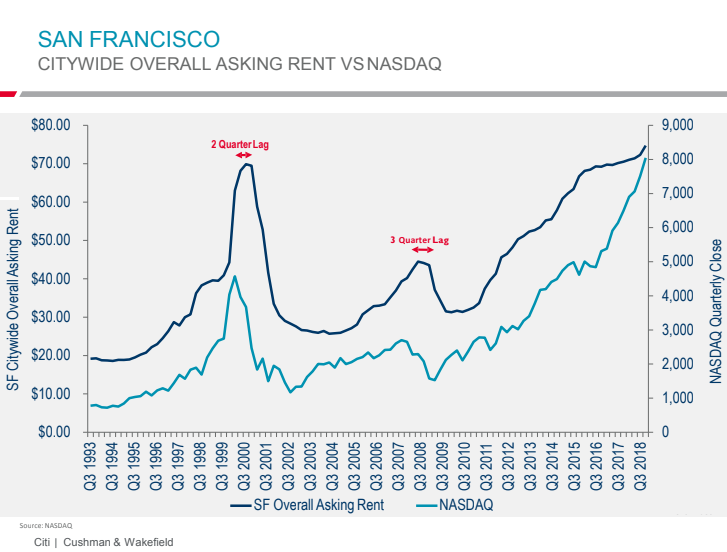 The chart depicts overall asking rents for the city of San Francisco, from the super-high-dollar rents downtown to the somewhat less breathtakingly high rents in other areas of the city, across all classes of buildings. Turns out, San Francisco office asking-rents move in-near lockstep with the Nasdaq, but lag two or three quarters behind.

It has finally happened – a line in the sand has been breached. Read…  How Will 6% Mortgage Rates Deal with Housing Bubble 2?