Ford drops to 4th place. Industry sales in the red for the year. But FCA sales jump.

GM stopped giving out monthly numbers of new-vehicle deliveries earlier this year, and switched to quarterly releases. Today it reported its third quarter new vehicle deliveries, and they plunged 11% compared to a year ago, to 694,638 cars and light trucks. All of its brands lost ground.

Because we stubbornly insist on monthly numbers, even if GM [GM] is hiding them, they’re now being estimated. Based on Bloomberg’s survey of analysts, GM’s sales in the month of September plunged 14%.

These “deliveries” represent the number of new vehicles sold and delivered by dealers to their customers, or delivered by automakers directly to large fleet customers, such as rental car companies.

Ford blamed the hurricanes last year and this year.

For the industry, September presented a tough scenario for comparison due to strong performance a year ago resulting from pent-up and replacement demand following Hurricane Harvey in Houston, while September 2018 experienced some weather-related impact due to Hurricane Florence.

“Tale of two hurricanes” is what Ford’s head of US sales, Mark LaNerve called this phenomenon in a conference call. OK, I get it, the hurricanes were terrible, but apparently didn’t hit Fiat-Chrysler.

Fiat Chrysler, whose brands include Chrysler, Dodge, Jeep, Alfa Romeo, Fiat, and Maserati, was able to boost its sales by 14.5% in September to 200,769 new vehicles. It thus outsold Ford and moved into third position behind GM and Toyota. Ford dropped into fourth place.

Other manufacturers didn’t fare so well either: Among the largest: Nissan’s deliveries plunged 12.2% in September and 6.0% YTD. Honda deliveries dropped 7.0% for the month and 2% YTD.

Among the smaller automakers – but the one that hogs all the attention – Tesla was finally able to get some larger numbers of Model 3s delivered. Since it discloses only global deliveries on a quarterly basis, monthly US deliveries are estimated. According to estimates by Automotive News, Tesla delivered 21,700 vehicles in the US in September, up from 4,200 a year ago. This gave Tesla a market share in the US of 1.5%, just ahead of Mazda.

In the table below, percentage sales declines are marked in red. Automakers are listed in order of their overall deliveries in September. Many of these automakers have more than one brand. In addition to the brands mentioned above: 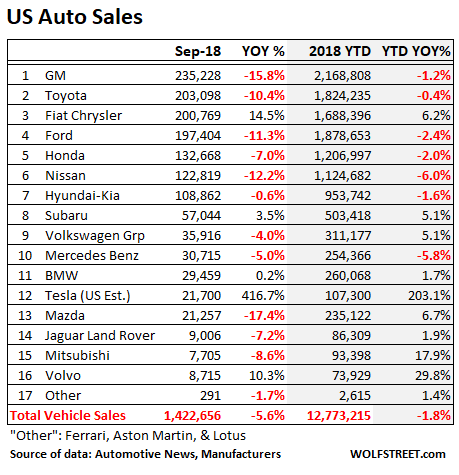 So overall it was a lousy month, with total sales down 5.6% from a year ago, dragging year-to-date sales into the red: down 1.8%. This comes after 2017, which had already been a down year. So the hopes that 2018 would produce higher sales for the industry than last year are rapidly being dashed.

But consumers, struggling with affordability of new vehicles, are switching to used vehicles. And the used-vehicle market is hot, and prices spike to record levels. Read…  What’s Going On in the Used Car & Truck Market?

80 comments for “September Carmageddon for Ford and GM”