The Fed raised its target range by a quarter point on Wednesday, but had already been completely baked in: US Treasury yields barely budged. And the “yield curve” – that monster that tends to “invert” late in the rate-hike cycle, where short-term yields are higher than long-term yields, which tends to be followed by recessions or worse – hasn’t inverted yet because long-term yields have risen in parallel. That was not a given two months ago.

The chart below shows the yield curves on September 28 at the close (red line) and on December 14, 2016, when the Fed got serious about raising rates (blue line). The red line has “flattened” compared to the black line, especially from the 2-year yield on out, and the 24-basis-point spread between the 2-year and the 10-year markers has shriveled to 24 basis points, from the 127-basis-point spread on December 14, 2016: 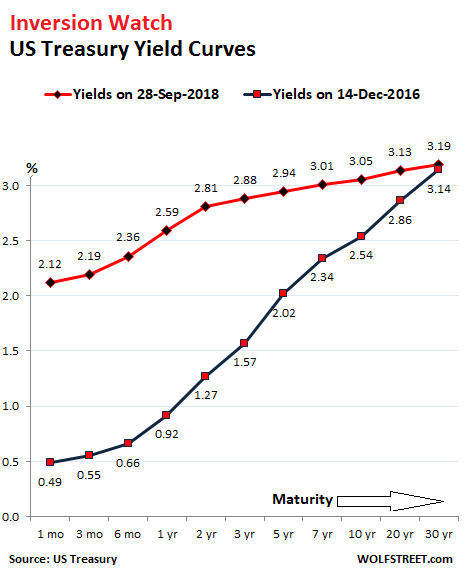 While the Fed has succeeded in pushing up shorter-term yields, the effects have been less and less the longer the maturities get, to where the 30-year yield hasn’t budged at all since December 2016.

The Fed leads, other central banks follow – and markets expect it. The ECB is now gingerly communicating that future rate increases are coming, that the era of QE will end this year, and that the era of NIRP (negative interest rate policy) will end next year. Even the Bank of Japan is making noises about giving long-term yields – which it specifically controls via its “yield curve targeting” model – more room to move; and its negative short-term yields are under pressure from Japanese banks.

As a result, in both NIRP bailiwicks, long-term yields have started to rise, even as short-term yields remain locked in place for now, and yield curves have steepened.

The chart below shows the yield curves of the four largest economies. Yields on September 29 are in brighter colors and the yields on July 20 are in washed-out colors. Note that all longer-term yields have risen, even in Germany and Japan where short-term yields are still cemented into the NIRP absurdity: 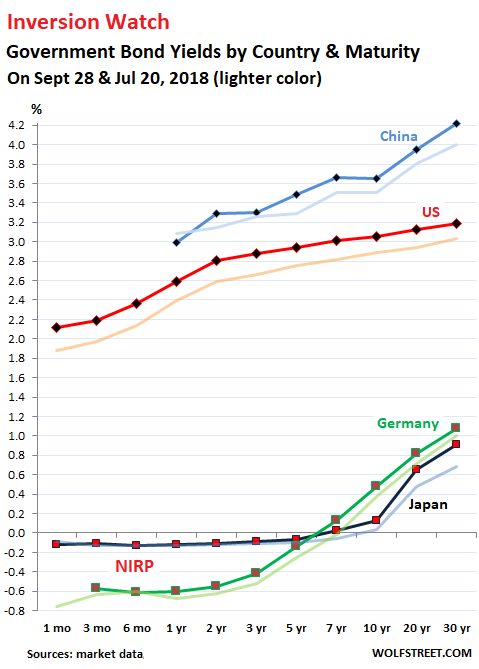 In the US Treasury market (red line), the entire yield curve has risen in near-parallel since July 20, with all yields rising by similar amounts. This is what has kept the yield curve from inverting when the Fed’s move pushed up short-term yields.

In the Chinese government bond market (light blue line), the yield curve has steepened, as the 1-year yield has inched down since July 20, while all other yields have risen. Chinese 30-year yields are now at 4.2%.

Japanese yields (dark blue line) for maturities up to 5 years are totally flat and a notch below zero. Then they begin to rise, turning positive at around 6 years. The 7-year yield was still negative on July 20 (-0.01%). By Friday it had risen to positive 0.024%. The 10-year yield has risen to 0.13%. And beyond it, the curve steepens sharply. The entire JGB market is under iron-fisted control of the Bank of Japan, which owns nearly half of them, and we can assume that the yield curve is exactly where the BOJ wants it with its “yield curve targeting.” Nothing is allowed to happen by market forces, which have died.

German yields (green line) are now positive from about 6 years out. A month ago, the 7-year yield was still negative (-0.025). By Friday, it had risen to positive 0.124%. But short-term yields remain deeply mired in the negative, thanks to the ECB’s NIRP, with the 3-month to 2-year yields hovering around negative -0.6%.

The ECB’s QE is scheduled to end in December, and NIRP is scheduled to go on the chopping block next year. The Fed has been “removing accommodation” since December 2015, albeit at a glacial, or rather “gradual” pace. Even the BOJ, despite declarations to the contrary, has been sporadically dialing back its QQE program. Markets might still be in denial, and the way back to some sort of normalcy, if that’s the right word, will be long and arduous, and might never quite get there, but it would be a start.

The US is “on an unsustainable fiscal path, there’s no hiding from it,” explained Fed Chairman Jerome Powell at the press conference, along with some other key concepts. Read… The Fed’s Not Backing Off: Powell’s Standouts & Zingers at the Press Conference