Was “QQE” just a pretext for bringing the government bond market under control to avoid a Greek-style debt crisis?

In June, total assets on the Bank of Japan’s balance sheet dropped by ¥3.79 trillion yen ($34 billion) from May, to ¥537 trillion ($4.87 trillion). It was the third month-over-month drop in seven months, and the first such drops since late 2012, when the Abenomics-designed blistering “QQE” (Qualitative and Quantitative Easing) kicked off. So has the “QQE Unwind” commenced?

This chart shows the month-to-month changes of the total balance sheet. Note the trend over the past 16 months and the three “QQE unwind” episodes (red): 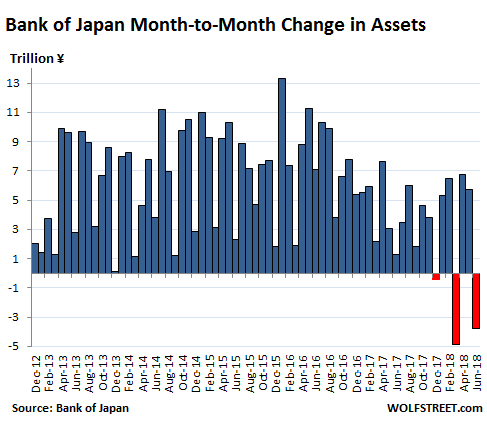 But this sporadic balance sheet reduction (here’s my report on the December decline) and the overall “tapering” of its growth contradict the official rhetoric.

Bank of Japan Governor Haruhiko Kuroda along with most of his colleagues keep insisting that the BOJ would “patiently” maintain its ultra-easy monetary policy and that it would “keep expanding the monetary base until inflation is above 2%.” The blistering asset purchases would add about ¥80 trillion ($725 billion) to the balance sheet every year. And the BOJ has repeatedly affirmed its short-term interest-rate target of a negative -0.1%.

In September 2016, it introduced a new thingy that no other central bank has tried before: “Yield Curve Control” – a policy of targeting yields along the entire yield curve, and not just short-term yields. The stated purpose was to make sure the 10-year yield stayed near 0% but doesn’t drop into the negative, a concern at the time.

The BOJ has decided that it can control bond yields all the way up the yield curve by buying or selling long-dated Japanese Government Bonds (JGBs). And so far, the experiment in market control has worked.  Along the way, the entire JGB market has withered, and there are days when trading dries up completely.

Under QQE, the BOJ has been buying mostly Japanese government securities (JGBs and short-term bills); it also purchased corporate bonds, Japanese REITs, and equity ETFs. But now, the party appears to be ending, despite the speeches to the contrary.

From the distance, however, the flattening out (tapering) of the BOJ’s assets is barely noticeable, given the magnitude of the whole pile that amounts to about 96% of Japan’s GDP (the Fed’s balance sheet amounted to about 23% of US GDP at the peak): 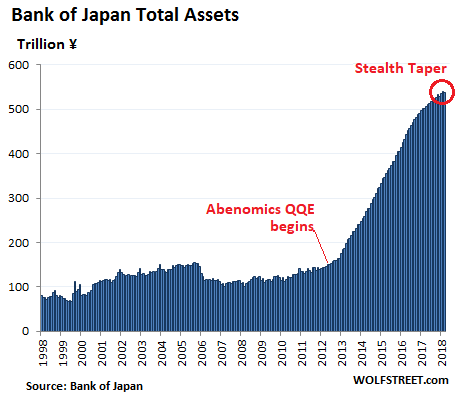 The leveling off of these monthly purchases becomes clearer in the chart below that covers a shorter time frame. Note the monthly declines in December, March, and June: 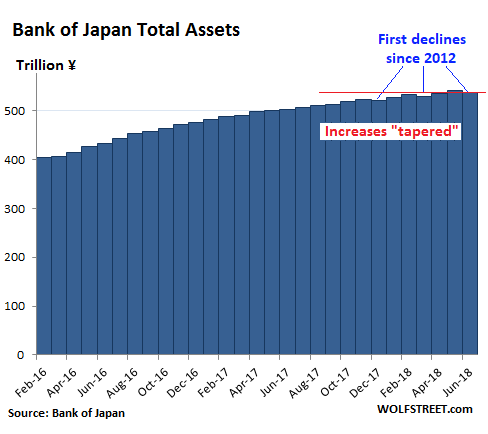 This chart shows this rolling 12-month change in the balance sheet, going back to the Financial Crisis: 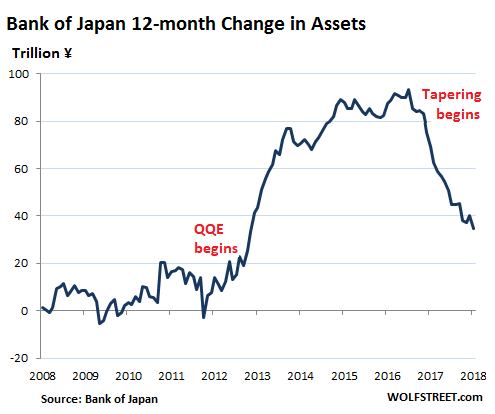 Japanese government securities (JGBs and short-term bills), are the largest asset class on the BOJ’s balance sheet. The BOJ holds 46% of all outstanding Japanese government debt, up from 14% in late 2012 before QQE kicked off. But the amount of these securities on the BOJ’s balance sheet fell in June by ¥4.6 trillion ($42 billion) from the prior month, to ¥454.8 trillion, the same level where they’d been in March.

It was the third monthly decline in seven months. For the 12-month period ended June 30, the BOJ added only ¥27.4 trillion of these securities, down from around ¥80 trillion during the QQE peak years.

In other words, the BOJ has started to let some government securities mature and roll off the balance sheet without replacement – much like the Fed’s QE unwind. 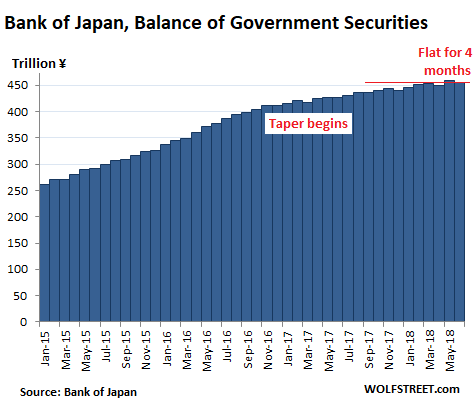 None of this was announced – neither the “tapering” that commenced 16 months ago nor the recent sporadic “QQE unwind.” They happened despite official rhetoric to the contrary.

The BOJ combined with government-controlled institutions such as the Government Pension Investment Fund, one of the largest such pension funds in the world, and the partially privatized Japan Post Bank, one of the largest deposit holders in the world, own a solid majority of the Japanese government debt and together totally control the market for it. But the private sector has largely exited the Japanese government bond market.

The BOJ’s mantra “to keep expanding the monetary base until inflation is above 2%” is an increasingly obvious pretext for a policy that was designed to avoid a Greek-style debt crisis.

This type of inflation, though low by US standards, would be devastating to Japanese consumers because nothing is prepared for inflation and nothing is indexed to inflation after more than two decades of relative price stability. At every uptick of inflation, consumers cut back because their incomes aren’t going up with inflation, and their savings aren’t earning anything, and their pensions aren’t going up either – and people who depend on savings and pensions are a big group of spenders in Japan.

The subtext is that authorities may be OK with low inflation and that this mantra of 2% inflation-at-all-costs is used as pretext for QQE to get the bond market under control preemptively by purchasing about half of all outstanding government debt – a policy that was formed after having watched what a debt crisis did to Greece.

Japan – by far the most over-indebted country in the world, far more indebted than Greece – has decided that whatever the outcome of this debt will be, there will be not debt crisis. There may be a currency crisis – which Japan is more able to weather – but there will be not even a hint of a debt crisis. And now that the bond market is entirely under control, bond purchases can be tapered away. And this would mark the end of QQE.

As far as reserve currencies is concerned, central banks are not enthusiastic about the Chinese renminbi. Read…  US Dollar Hegemony Tripped Up by Chinese Renminbi?