Home-equity-loan balances in Canada per capita are now 3.3 times what they were in the US during HELOC peak before it all collapsed.

Home Equity Lines of Credit – the infamous HELOCs Americans used as endless ATMs to draw equity out of their homes before home prices collapsed – played a role in the US mortgage crisis. And Americans have learned a lesson since, despite mega-efforts by the industry to revive HELOCs.

Balances of revolving home equity loans at US commercial banks soared by about 300% in seven years, from $154 billion at the beginning of 2002 right into the crisis, peaking in June 2009 at $609 billion. As the housing-and-mortgage crisis blew those dreams of the endless ATM apart, Americans learned their lessons, either defaulting on, or paying down, their HELOCs. At the end of August, HELOC balances had fallen 41% from the peak, to $357 billion – back where they’d been in 2004 on the way up – even as aggregate home values now exceed the peak of Housing Bubble 1: 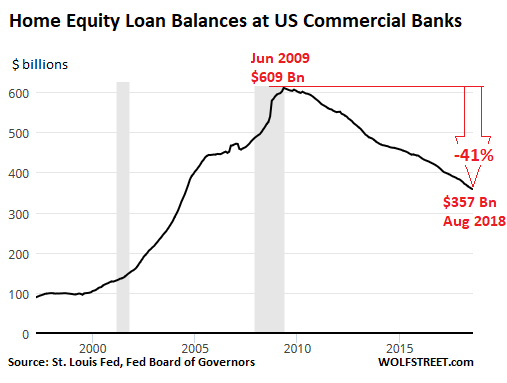 This near-decade-long decline triggered lamentations by William Dudley last year, when he was still president of the New York Fed, that Americans weren’t borrowing enough against their homes, and that they therefore were too lackadaisical in their job of boosting consumer spending with borrowed money.

“The previous behavior of using housing debt to finance other kinds of consumption seems to have completely disappeared,” he said. “Instead, people are apparently leaving the wealth generated by rising home prices ‘locked up’ in their homes.”

In Canada there is no such reluctance. That makes sense because Canadians had skipped the housing bust that Americans had gone through. Instead, the Canadian home-price surge, after a brief dip during the Financial Crisis, continued until 2017 and in the process became one of the wildest and scariest housing bubbles in the world. And Canadians are loving their endless home-equity ATMs.

Canadians owe C$290 billion (US$225 billion) in revolving home equity debt, such as HELOCs, at the end of July, according to Better Dwelling, a Canadian real-estate site, citing data from the  Office of the Superintendent Financial of Institutions (OSFI). This is up 2.6% from a year ago, and a new record: 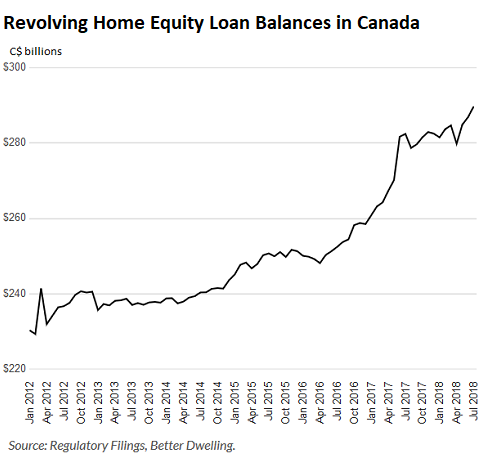 In US dollar terms, to make it apples and apples, Canadians owe $225 billion in home equity loans. Americans owe $357 billion. But here is the thing: the US population (326 million) is about nine times larger than the Canadian population (36 million). On a per-capita basis, American owe $1,095. During the peak, they owed $1,868.  Canadians on a per-capita basis now owe $6,250 — or 3.3 times as much as Americans did during the peak.

If Americans owed as much per capita as Canadians, they’d owe collectively a mind-blowing $2 trillion! Compared to the $609 billion they owed during the home equity line of credit peak in June 2009, which collapsed with such great fanfare.

Canadians have a right to be worried about this, if they spend a moment looking south across the border and studying what happened there during Housing Bust 1. It was ugly. But we already know, because it has been endlessly drummed into us: Whatever happened in the US cannot happen in Canada.

The balance of debt grew as home prices made the largest jump in Canadian history. In the event of a price correction, borrowers may find themselves with less equity than expected. Over a quarter of HELOC borrowers have been seniors, which is a tough age to find yourself short on cash.

Dudley, in his lamentations about the decline of HELOCs in the US since the Financial Crisis, tried to explain why the Americans have been shying away from HELOCs. Among the reasons (note the term “scarred”):

[H]ouseholds may have been scarred by the experience of seeing their neighbors who borrowed heavily during the boom lose their homes and have their credit ratings badly damaged. Observing these consequences may dissuade current homeowners from making themselves vulnerable to foreclosure by borrowing against rising home values.

This would lead to an increase in a household’s precautionary demand for savings in the form of higher housing equity. This increased equity cushion would guard against the risk that the household could find itself in a negative equity position in the event of a future decline in home prices.  With an equity cushion, even if the household were to experience a job loss during a future housing downturn, they would be able to sell their home, pay off the mortgage and avoid any damage to their credit.

It appears Canadians still have this “scarring” experience – and the bitter lessons it provides – in front of them.

The Bank of Canada faces a self-inflicted quandary. After keeping rates too low for too many years, it is now confronted with asset bubbles, including one of the world’s biggest and riskiest housing bubbles that has begun to deflate in some corners. Read… Toxic Mix in Canada: Spiking Inflation, Variable-Rate Mortgages, and a Housing Bubble

107 comments for “HELOCs in the US & Canada: As “Scarred” Americans Learned Bitter Lesson, Canadians Went Nuts”