What will the Bank of Canada do?

The Bank of Canada has nudged up its target rate four times, starting July a year ago, from 0.5% to 1.5%. It last hiked on July 11. But now it is facing inflation that suddenly and unexpectedly jumped at twice the Bank of Canada’s current target rate.

Canada’s Consumer Price Index (CPI) rose 3.0% in July from a year earlier, the hottest since September 2011, Statistics Canada reported on Friday. Consensus expectation was a rise of 2.5%, same as in June. 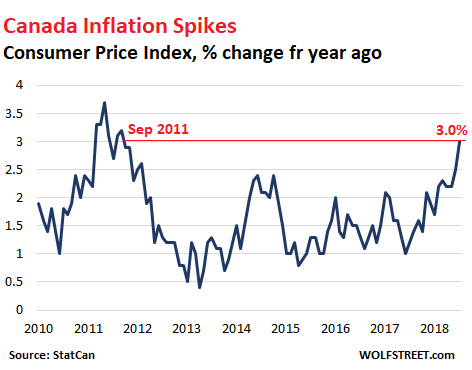 Prices rose in all major components. Prices for services – the largest part of consumer spending – jumped 3.2% year over year, up from a 2.2% increase in June.

In most provinces, CPI ran even hotter:

Like the Fed and other central banks, the Bank of Canada has its “preferred” measures of inflation. And they’re a lot lower, of course. Which is the point. But unlike the Fed, it does not use a core index “without food and energy.” Instead, it has three measures (definitions) that have been statistically “trimmed:” CPI-trim, CPI-median and CPI-common.

Statistically trimming the hot items out of an index works miracles, though it makes this trimmed index even more meaningless to consumers because consumers, who live in the the real world, cannot trim those items out of their budgets quite so easily. So now, after a proper trimming of the index, the BOC is right on target.

Among economists, the clamoring has already started for the BOC not to raise its target rate at its next meeting in September since its preferred measures of inflation are “under control,” even while the overall CPI is threatening to run amok.

The BOC faces a self-inflicted quandary. After keeping rates too low for way too many years that inflated all kinds of asset bubbles, it is now confronted with those asset bubbles, including one of the world’s biggest and riskiest housing bubbles that has begun to deflate in some corners.

The BOC has been on record for well over a year, trying to tamp down on the housing bubble and housing speculation by warning potential homebuyers and speculators to be prudent, to be aware of the risks, and to be ready for declining home prices. It’s doing so because it knows how risky a housing bubble, when it deflates, is for the banks and mortgage insurers.

In theory, it should have raised rates sooner, faster, and further, at least keeping up with the excruciatingly slow snail’s pace that the Fed has set – seven hikes in 2.5 years. In practice, the BOC faces Canada’s mortgages.

The 30-year fixed rate mortgages that are standard in the US are rare in Canada. These are the three basic most common mortgage types in Canada – and they all entail rising mortgage payments for current homeowners when rates rise:

So-called “Fixed-rate mortgages”: By US lingo, this a misnomer. The interest rate only stays fixed for a set period, such as five years (“five-year fixed-rate mortgage”), and when that period is up, the rate adjusts to a current rate. In a rising-rate environment, you could wake up to a potentially much higher payment in the sixth year of your mortgage.

“Adjustable rate mortgages”: The interest rate adjusts with the moves of a bank’s current prime rate. An increase in rate causes the monthly payment to increase. These adjustments can happen as often as eight times a year – and without a lot of notice. So homeowners need to have the extra income to make mortgage payments in a rising-rate environment.

“Variable rate mortgages”: The interest rate adjusts with the prime rate. But the monthly payment stays the same for the term of the mortgage, such as five years. During that time, the extra interest that is added to the payment replaces the principal portion of the payment. After the term (five years), the mortgage is renewed. The remaining principal is now higher than it would have been. And current rates apply. After going through a rising-rate environment, your payment would be far larger.

If a current homeowner is stretching to make payments at the current rate, after six mini-hikes by the BOC to bring its rate to 3.0%, the future payment could be out of reach.

In this case, homeowners, threatened with default, would try to sell the home. But if home prices have been skidding due to the rising interest-rate environment, homeowners might owe more on the mortgage than their home will bring in the sale after fees, and these homeowners cannot afford to sell. And they cannot afford to make the payment either. The inevitable happens: a default.

If a small number of homeowners get wrapped up in this mechanism, it’s no big deal; the banks and mortgage insurers can take the losses. If it is 8% or 10%, it’s a major mortgage crisis.

This is what the Bank of Canada is facing: Trying to tamp down on inflation by raising rates more than a tiny wee-bit could conjure up all kinds of problems. And not doing anything about inflation could too.

If you’re tempted to think that what happened in the US cannot happen in Canada because Canadians cannot just walk away from their mortgages, read this…  Why a US-Style Housing Bust & Mortgage Crisis Can Happen in Canada, Australia, and Other Bubble Markets