The fear of becoming a “fallen angel.”

Companies whose credit rating is below “investment grade” can borrow in the capital markets in two ways: by issuing what is lovingly called junk bonds; and by issuing “leveraged loans.”

Leveraged loans are too risky for banks to keep on their books. Banks sell them, and they can be traded; or banks package them into Collateralized Loan Obligations (CLOs), and they’re traded as such. Being loans, they’re not considered securities, but they trade like securities. They’re the booming sisters of the languishing junk bonds.

According to Moody’s, this is what has been happening with junk bonds and leveraged loans:

The majority of companies is junk-rated.

About 60% of the US companies that Moody’s rates have a credit rating of “speculative” – otherwise known as “high yield” or “junk,” according to John Lonski, Chief Economist at Moody’s Capital Markets Research.

But these junk-rated companies tend to be smaller. Though they carry a lot of debt in relationship to their size (that’s why they’re junk rated), in aggregate they can’t measure up to the investment-grade giants, like Apple and Walmart that can issue tens of billions of dollars in investment-grade bonds in one fell swoop. For example, Walmart is currently flogging $16 billion in bonds to fund the acquisition of a 77% stake in Flipcart, India’s biggest online retailer.

So in terms of dollars, the amount of junk bonds outstanding ($1.27 trillion) accounted for only 17% of the total amount of corporate bonds. But when the $1.45 trillion of “leveraged loans” are added to the picture, the total rises to 37% — and that’s a lot of high-risk debt.

Future “fallen angels” are in the bulge bracket

In terms of dollar amounts, 56% of outstanding debt is rated “medium grade” (from A3 to Baa3), according to Moody’s. Baa3 is one hair above junk (here’s my cheat sheet on corporate credit ratings by the three major US rating agencies). A one-notch downgrade pushes a Baa3-rated company into junk territory and turns it into a “fallen angel.” In other words, the majority of companies sit one to four notches above that level.

But this average gain across the category, as puny as it is, hides the actual shift. Since 2009, the outstanding bonds issued by companies rated triple-A or Aa dropped 5.5% a year on average, and now amount to just $628 billion. And this comes despite a surge of mega-issuance by Apple (rated Aa1). The reason:  there are fewer and fewer companies with these ratings.

Triple-A is dying out. Only three US companies are still rated triple-A by Moody’s: Microsoft, Johnson & Johnson, and ExxonMobil. And it’s not because the credit standards have become stricter but because companies have taken on more leverage to buy back their own shares and to fund acquisitions in the cheap-debt era, and/or they have run into a buzz saw of problems, such as GE.

This chart by Moody’s shows how “medium grade” (A3 to Baa3) has come to dominate over the past few years (yellow line), compared to high-rage (green line) and junk bonds (gray line). Note however, that this chart does not include the surge in leveraged loans, the sisters of junk bonds. With them included, junk-rated debt, at $2.7 trillion, would be over halfway up the chart: 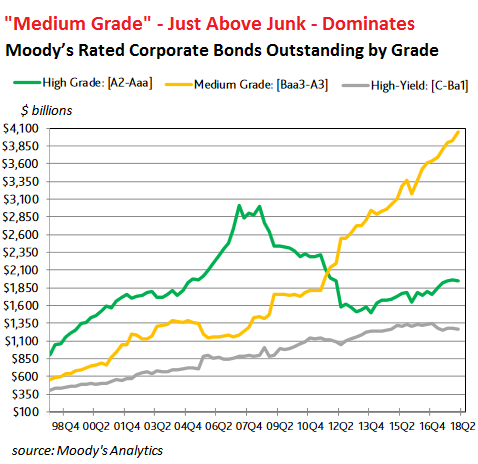 One more word about Fallen Angels

About $640 billion in bonds are rated Baa3, one hair above junk, up from $295 billion in Q3 2007, just before the Financial Crisis. A one-notch downgrade of the issuing company would put them into junk territory. This would be the “fallen-angel downgrade.” Moody’s points out that on average over the span of a year — and these have been the good times — 10% of Baa3-rated companies are downgraded into junk . And there are consequences:

In view of how most companies wish to avoid a fallen-angel downgrade, and given the age of the current business cycle upturn, companies having a Baa3 bond rating might opt for relatively conservative financial management. Such companies might be expected to proceed cautiously with capital spending, employee compensation, acquisitions, stock buybacks, and dividends.

This is one of the ways in which debt and credit ratings can impact the stock market: via scuttled share buybacks and dividend, long before the viability of the company is seriously in doubt.

This is one of the biggest such deals ever, happening now: A group of PE firms extracts $3.75 billion from a company after they’d already extracted billions. Read… This Deal Shows How the Junk-Credit Market is Still Irrationally Exuberant