Yup, consumers have to spend more to buy the same stuff.

“U.S. Retail Sales Soared in May” and similar headlines graced the media this morning – and not a word about inflation, or rather the loss of the dollar’s purchasing power in May that caused nearly half of the gains in retail sales.

Total retail sales, including food services such as restaurants, surged 5.9% in May from a year ago to $501 billion (seasonally adjusted), the Commerce Department reported this morning. Retail sales without food services jumped 6.0% to $443 billion. Excluding motor vehicles and parts, retail sales jumped 6.4% to $399 billion. Those are big jumps! 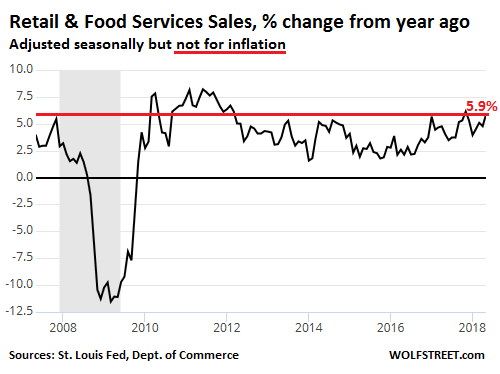 So this looks pretty good. The year-over-year percentage increase of total retail sales, at 5.9%, is at the top of the range over the past few years but below the annual increases from 2010 through 2012 which had easy year-over-year comparisons due to the buyers’ strike that had occurred during the Great Recession.

The sales increases were strong across the board except electronics and appliances, where sales rose only 1.9% year-over-year, and in the category, sporting goods, hobby, musical instruments, and book stores, where sales fell 0.7%.

“The report suggests low unemployment, rising wages, and tax cuts are prodding Americans to spend,” the Wall Street Journal gushed. “That, in turn, is boosting merchants’ sales while stoking stronger growth in the world’s largest economy.” Similar things cropped up across the media.

But on Tuesday, inflation as measured by the Consumer Price Index shed some light on what would happen in retail sales today. CPI rose 2.8% in May, the fastest year-over-year jump since February 2012. Conversely, the purchasing power of the dollar dropped 2.93% in May from a year ago, the fastest drop since November 2011.

The Commerce Department also releases retail sales adjusted for inflation. This measure of “real” retail sales, including food services, rose only 3.1% in May (seasonally adjusted) from a year ago – closer to the middle of the range of the past few years, and a lot less to gush about: 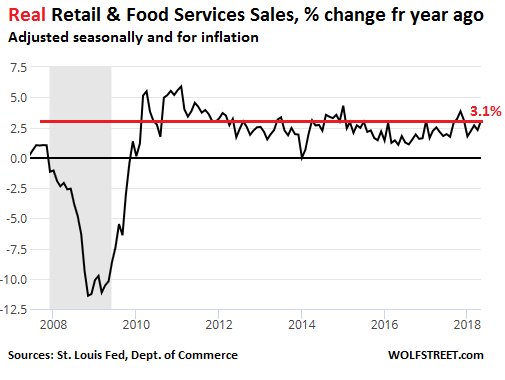 Retailers and consumer products companies love consumer price inflation. The more the better. It boosts their revenues without having to sell an extra thing. And that makes the top line of their earnings reports beat expectations. But they’re not so enthusiastic about the rising input costs, including rising wholesale prices and surging transportation costs. So they’ll have to do some financial engineering to overcome the hit to earnings-per-share from those cost increases, and share buybacks are perfect for that, while still allowing them to bask in the glory of revenue surprises to the upside induced by the loss of purchasing power of the dollar.

So everyone is happy — except consumers whose wage increases just got wiped out by the eroding purchasing power of the dollar.