The ECB’s Negative Interest Rate Policy has been the funniest monetary joke ever.

The distortions in the European bond markets are actually quite hilarious, when you think about them, and it’s hard to keep a straight face.

“Italian assets were pummeled again on mounting concern over the populist coalition’s fiscal plans, with the moves rippling across European debt markets,” Bloomberg wrote this morning, also trying hard to keep a straight face. As Italian bonds took a hit, “bond yields climbed to the highest levels in almost three years, while the premium to cover a default in the nation’s debt was the stiffest since October,” it said. “Investors fret the anti-establishment parties’ proposal to issue short-term credit notes – so-called ‘mini-BOTs’ – will lead to increased borrowing in what is already one of Europe’s most indebted economies.”

This comes on top of a proposal by the new coalition last week that the ECB should forgive and forget €250 billion in Italian bonds that it had foolishly bought.

The proposals by a government for a debt write-off, and the issuance of short-term credit notes as a sort of alternate currency are hallmarks of a looming default and should cause Italian yields to spike into the stratosphere, or at least into the double digits.

And so Italian government bonds fell, and the yield spiked today, adding to the prior four days of spiking. But wait…

Five trading days ago, the Italian two-year yield was still negative -0.12%. In other words, investors were still paying the Italian government – whose new players are contemplating a form of default – for the privilege of lending it money. And now, the two-year yield has spiked to a positive but still minuscule 0.247% at the moment. By comparison, the US Treasury two-year yield is 2.57% over 10 times higher!

Here is the hilarious chart of the spiking Italian yield from the negative into the positive: 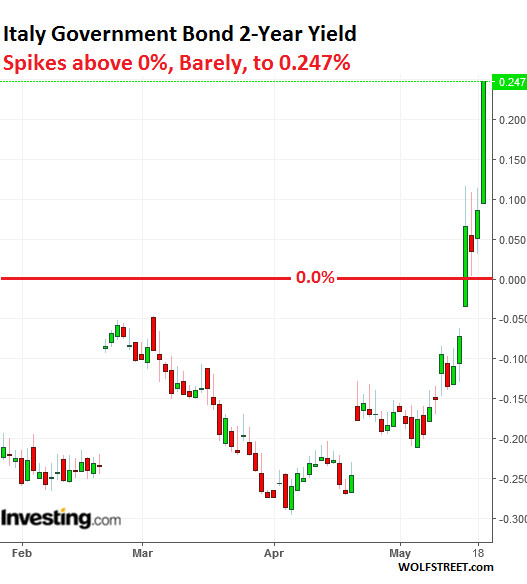 “The market will remain on somewhat of a knife edge as regards the intended plans and as the coalition government itself evolves,” Rabobank International analysts wrote in a note, cited by Bloomberg. “The fiscal credibility of the plan is far from guaranteed.”

The market will remain on somewhat of a knife edge… and because of the market is so seriously in fear of a haircut and a default, the yield eases finally into the positive, but barely?

This is an over-indebted government that doesn’t control its own currency and cannot print itself out of trouble and whose new leadership – made up of the coalition of the Five Star Movement on the left and the League on the right – is proposing a haircut for its creditors to make the debt burden easier, and is also proposing the issuance of an alternate currency to give it more money to spend, even as it also promises to crank up government deficit spending and cut taxes too.

So how is it possible the two-year yield was until Wednesday still negative? The 10-year yield is only at 2.35% at the moment. How is this possible?

It has been possible because the ECB, run by an Italian, has been buying Italian government and corporate bonds hand-over-fist, along with bonds from other countries in the Eurozone, as part of its QE, in order to do “whatever it takes,” and what it took was to stop any and all price discovery, and to force investors – such as life insurers and retirement schemes that have to buy euro bonds – to buy Italian bonds even when the yields were negative. These outfits, actually their beneficiaries whose money this is, are now pocketing guaranteed losses. So it’s not hilarious to them.

But the ECB has tapered its bond purchases to €30 billion a month, and will likely end them this year. Leadership at the ECB will change in 2019, and Italy will lose its champion at the ECB. And it’s possible that the new leadership at the ECB might allow some price discovery to happen – at least until Italian government bonds re-implode as they did in 2011, with the 10-year yield above 7%, before Draghi’s “whatever it takes” promise in 2012.

In the US, more changes in the mortgage market may be in the offing. Read…  Will the New Fed Get Rid of All its Mortgage-Backed Securities? That Seems to be the Plan