Why do they risk so much for so little?

Apple is doing it, everyone is doing it: US companies are issuing record amounts of bonds denominated in euros. On Thursday, Apple announced in an SEC filing that it would issue €2.5 billion in euro bonds, the proceeds of which will be used to fund share buybacks and dividends to be paid in dollars. These bonds will come in two tranches: €1.25 billion of 8-year notes and €1.25 billion of 12-year notes, with coupon payments of 0.875% and 1.375% respectively.

Yields are not yet established since the bonds have not been priced yet. But they will likely not be far off from the coupon. And they won’t even compensate investors for the loss of purchasing power based on the current rates of inflation: 2.2% in the US and 1.9% in the Eurozone.

Yet, demand is hefty in yield-starved euro land, where the ECB has imposed its negative interest rate policy (NIRP) on investors and is buying €60 billion a month in all kinds of paper assets: Underwriters have received over $5 billion in orders for those Apple notes.

Issuance of these “reverse Yankee” bonds – euro-denominated bonds issued by US companies – has surged because the cost of borrowing in the Eurozone has plunged to ludicrously low levels. Even for the riskiest non-investment-grade corporate debt – called junk bonds, for good reason – the average yield is currently 2.9%. This chart of the BofA Merrill Lynch Euro High Yield Index (data via FRED, St. Louis Fed) shows this Eurozone absurdity: 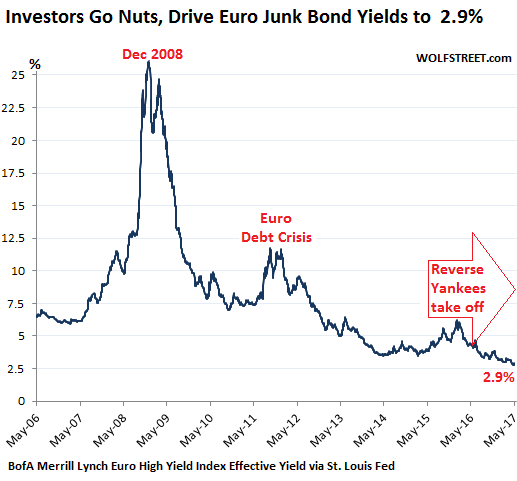 With the inflation rate in the Eurozone at 1.9%, investors accept a “real” yield of on average 1%, in return for lending their money to junk-rated companies that have an appreciable risk of default with subsequent hefty losses for those investors.

By comparison, what is considered the most liquid and safe paper, the 10-year US Treasury note, trades at a yield of 2.24%. The yield of the US high-yield bond index – a basket of junk bonds that is roughly equivalent to the euro junk-bond index above – is 5.7%. Riskier CCC-rated junk bonds trade at an average yield of 10.1%.

These yields in the US are extraordinarily low too. But they’re multiples higher than the yields of equivalent debt in the Eurozone. For US companies, this is as close to free money as they can get.

In 2015, after the ECB had announced its QE and other measures, issuance of reverse Yankee bonds soared 46% from 2014. And this trend has continued. With the Fed now in the mood of raising its target rate and unwinding QE, 2017 looks like another record year for reverse Yankee bonds. According to Dealogic, issuance year-to-date has reached €57.4 billion.

Dealogic cites additional reasons: “The reverse Yankee market is also primed for further growth, amid currency volatility and rumored changes to US tax law, specifically the end of tax deductibility for interest expenses on debt.”

The two main components of that €57.4 billion are nonfinancial US corporations and US megabanks.

US corporations have issued €32.6 billion so far this year. This includes the recent €8 billion “megadeal” by GE but it does not include the Apple deal which hasn’t been completed.

US megabanks have jumped with both feet into this cheap money: Issuance of reverse Yankee bonds has soared to a record €24.7 billion so far this year. According to Dealogic, “The heavy issuance comes as banks raise debt to satisfy the total loss-absorbing capacity (TLAC) requirement and to boost their net stable funding ratios.”

This chart shows that surge, with issuance up 150% year-to-date from the same period in 2014: 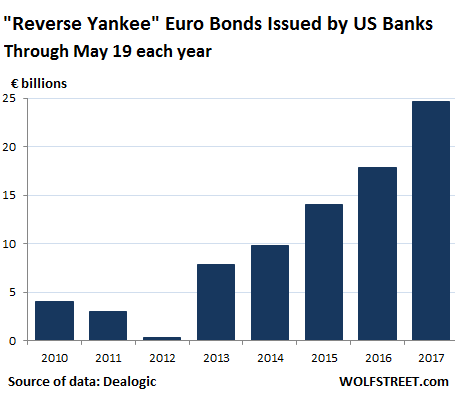 The winners in this ECB-designed game are US companies. And the losers? Euro investors. In theory, they could just say no. In practice, many can’t. They’re forced buyers. Institutional investors, such as bond funds and life insurers, are obligated to buy euro bonds. They’re facing the relentless bid from the ECB, whose objective is to overpay to drive down yields, not to make money. Everyone else is in the same boat, whether they want to or not.

But ultimately, the forced buyers don’t care. As long as they follow the market, they’re fine. They’re getting paid to play with other people’s money. And these other people who have their nest eggs tied up in these things can’t really complain because the interest they get at the bank is even worse – and in some cases negative.

For now, as yields fall, bonds issued in prior years show capital gains on paper. It soothes a lot of nerves. But as bonds get closer to maturity, their value falls toward face value regardless of what the ECB does, and these capital gains turn into fondly-remembered optical illusions replaced by capital losses.

It’s associated with a recession. The last time was the Financial Crisis. Read…  Oops, this Wasn’t Supposed to Occur in a Rosy Credit Scenario

64 comments for “Corporate America’s “Reverse Yankees” Shoot to Record in ECB Absurdity, But Who Are the Losers?”