Gasoline theft is now the second most profitable activity for Mexico’s criminal gangs.

Mexico’s state-owned oil giant, Petróleos de Mexico, AKA Pemex, has spent the last few decades being pillaged and plundered from the inside-out. The state-owned giant has been financially bled to the verge of collapse by its swollen ranks of senior managers and administrators, corrupt politicians, shady contractors, and the untouchable, unsackable leaders of the oil workers’ union.

Now, Pemex is being bled dry from the outside-in. Those doing the plundering this time include armies of amateur opportunists who live close to the major pipelines that crisscross the country as well as some of Mexico’s most ruthless and organized drug gangs. Thanks to these groups’ immunity, bought with bribes and death threats, Pemex is estimated to be losing 20,000 barrels of gasoline daily, with a market value of around $4 million.That’s about $1.4 billion a year.

That’s enough to put Mexico among the top in the world for fuel theft. In 2015, over 5,574 illegal pipeline taps were found. Pemex’s response to the problem has only made matters worse. The company has tried to stop running ready-to-use fuels through its pipelines. Instead, it now carries raw products from refineries to storage terminals where they are processed and shipped out in tanker trucks. But instead of eradicating or reducing fuel theft, it has merely made it easier as stolen fuel is taken straight from Pemex’s storage facilities, where thieves siphon fuel by the truckload and simply drive away.

Much of the plunder is taking place in the central state of Puebla, which, through a pure accident of geography, is located slap-bang between the vast oil fields of Veracruz and Mexico’s gas-guzzling capital Mexico City. Just one of the state’s gas pipelines, the “Minatitlán-México” line, accounts for 34% of all the oil stolen in Mexico.

Puebla is one of Mexico’s safest regions but it has recently seen a spate of violence as clashes rage between soldiers and fuel thieves. At the beginning of May, one such battle claimed the lives of four soldiers and six suspected oil thieves, who used local civilians as human shields.

In 2016, the authorities discovered 1,500 new illegal pipeline taps in Puebla, roughly 800 more than the year before. None of this would be imaginable without at least a certain amount of complicity between Pemex workers, who have both the expertise and tools to tap the pipelines, Pemex contractors, and the gangs of highly organized criminals. As Carlos Loret de Mata reports, new drone footage has revealed that the gangs have achieved economies of scale and operational efficiences that would be the envy of many of the world’s largest corporations:

It’s midnight. There are 148 trucks lining up to fill their drums with gasoline. They are neatly parked in the surrounding streets. Everyone knows their place, they respect it, they perform with perfect choreography.

…It could be the distribution line of Bimbo or Coca-Cola. It looks like a Pemex terminal. But it’s not. It’s a hamlet next to the Puebla-Orizaba highway where the huachicoleros (fuel thieves) drilled a duct and their trucks are just waiting to load the stolen product and take it wherever they’re told to: gas stations, transport companies, big consumers.

The scene was captured by a drone belonging to the Mexican federal government and is to date the most conclusive proof of the sheer scale and scope of the criminal organizations behind the oil siphoning.

The sale of stolen gasoline is now the second most profitable source of funds for Mexico’s criminal gangs, behind the trafficking of drugs. The pilfered oil is sold at half the price (or less) of what drivers would have to pay at a Pemex gas station.

Mexico’s black market for gasoline has been growing for years, but it was given an almighty boost at the beginning of 2017 when the government decided, against all reason, to follow through on a previous pledge to withdraw public subsidies that had helped keep gasoline prices artificially low, just as inflationary pressures were building. The result was a 20% surge in average gasoline prices, which triggered a wave of angry protests throughout the country.

The depth of public anger is understandable: Mexicans spend more of their annual income on fuel than residents of 60 other countries tracked by Bloomberg, due largely to the country’s low salaries and high gasoline consumption. The Peña Nieto government had repeatedly promised that market liberalization would lead to markedly lower prices at the pump. The exact opposite has occurred, with average prices for gas and diesel soaring by around a third since Peña Nieto’s oil reforms were passed in 2014.

Now, despite the Bank of Mexico’s frantic efforts to keep inflation contained by raising its policy rate to 6.75% (up from 2.5% early last year), the inflation rate has soared to 5.8% (via Trading Economics): 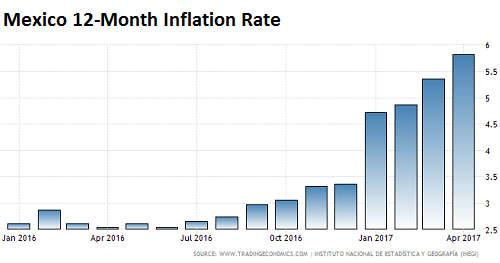 Pemex is bleeding oil and funds at an alarming rate. For over 70 years, Pemex served as a vast funding asset, at times providing as much as one-third of total government revenues. But in 2016, it became a national liability, requiring a $4.2 billion bailout from the government.

Further fuel tax rises may also be needed to keep the country’s increasingly strained fiscal health in check. But the more prices rise at the pump, the higher they will push demand on the black market, which in turn will feed the need for more pilfered fuel. In the meantime, the government has dispatched 2,000 more soldiers to protect Puebla’s pipelines. And just like that, a region that had largely escaped the mindless barbarity of Mexico’s drug wars found itself slap bang on the front lines of a new emerging war, this time over gasoline. By Don Quijones.

Debt is suffocating the economy, but where did the money go? Read… Mexico’s Economy Is Being Plundered Dry

26 comments for “The Pillage of Pemex Turns Bloody”