Quant-focused hedge funds – they specialize in algorithmic rather than human trading – gained $4.6 billion of net new assets in the first quarter, and now hold $932 billion, or about 30% to the $3.1 trillion in total hedge-fund assets. At the same time, investors yanked $5.5 billion out of non-quant hedge funds. This comes on top of last year when investors had yanked $83 billion out of non-quant hedge funds and had poured $13 billion into quant funds.

Trading by quant funds has soared to 27.1% of all stock market trading, up from 13.6% in 2013, according to a series of reports by the Wall Street Journal. These trades can last from minutes to months. Quant funds are different from algo-driven high-frequency trading (HFT) where trades last only milliseconds. And they’re different from ETFs which also use algorithms.

This chart shows the soaring share of trading by quant funds (red line), compared to the largest other types of investors – traditional asset managers, non-quant hedge funds, and bank proprietary trading. Another 25% to 27% of the trading is done by other investor types, including individual investors, not shown in this chart: 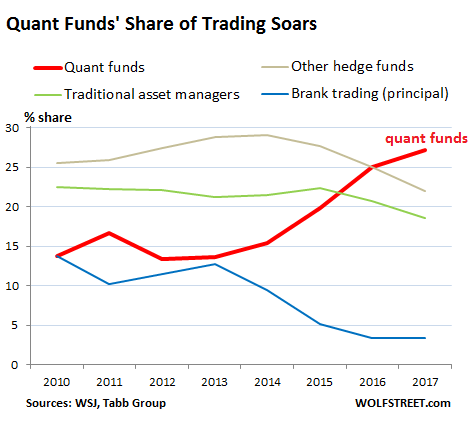 In addition, there are the fast growing “smart-beta” ETFs and mutual funds for mom-and-pop investors. They too are a form of quant funds focused on algorithmic trading. Assets in these funds in the US reached $760 billion so far in 2017, up from $108 billion in 2008, and up from $208 billion in 2011. In recent years, automated trading became available even for retail traders.

Algorithmic trading has been around for a long time – The WSJ refers to its 1974 article that “featured quant pioneer Ed Thorp” – but it’s just taking an ever larger share of the trading activity.

For example, Steven Cohen’s $12-billion hedge fund, Point 72 Asset Management, is moving about half of its portfolio managers to a “man plus machine” approach. The Wall Street Journal:

Teams that use old-school research methods are working alongside data scientists. Financial analysts are taking evening classes to learn data-science basics. Point72 is plowing tens of millions of dollars into a group that analyzes reams of data, including credit- card receipts and foot traffic captured by apps on smartphones. The results are passed on to traders at the Stamford, Conn., investment firm.

Point72 lost money in most of its traditional trading strategies last year, say people familiar with the results. The firm’s quant investors made about $500 million.

Quant funds follow all kinds of esoteric data, trying to gain some kind of advantage:

Hedge funds with quant-focused strategies have been poring over private Chinese and Russian consumer surveys, illicit pharmaceutical sales on the dark web—a network of websites used by hackers and others to anonymously share information—and hotel bookings by U.S. travelers, according to Quandl Inc., a platform for such data.

Today’s algorithms can make continuous predictions based on analysis of past and present data while hundreds of real-time inputs bombard the computers with various signals.

Some investment firms are pushing into machine learning, which allows computers to analyze data and come up with their own predictive algorithms. Those machines no longer rely on humans to write the formulas.

Not that is leads to huge returns. Quant funds earned about 5.1% per year on average over the past five years. While this beats average hedge fund returns of 4.3%, it lags far behind the 15% average annual total return (including dividends) of the S&P 500 over the same period.

But what happens to the markets when a few machines rather than millions of humans make more and more trading decisions? When too many of them use the same inputs and formulas by the same PhDs from the same schools?

“Will the market fall in lockstep, pulling every asset lower?” the Journal asks. These funds could give “a false sense of security about the market’s stability.” For example:

In 2007, what became known as the “quant meltdown” was caused largely by the similarity of strategies among quants, who simultaneously rushed to sell, causing losses at other firms and more selling.

Mathematician William Byers, who wrote the 2010 book “How Mathematicians Think,” warns that rendering the world in numbers can give investors a deceptive belief that predictions churned out of computers are more reliable than they truly are. The more investors flock to complicated algorithmic models, the more likely it is some algorithms will be similar to one another, possibly fueling larger market disruptions, some analysts say.

It seems algos are programmed with a bias to buy. Individual stocks have risen to ludicrous levels that leave rational humans scratching their heads. But since everything always goes up, and even small dips are big buying opportunities for these algos, machine learning teaches algos precisely that, and it becomes a self-propagating machine, until something trips a limit somewhere.

And suddenly things happen that weren’t part of the scenario. To deal with it, the machines, perhaps in lockstep, revert to a part of the code that says “sell.” Plunging markets trigger more sell signals, and so on. And in this paroxysm of selling by the machines, there might not be enough human traders left – they’ve been sent to pasture years ago – to jump in and buy. Sure, it cannot happen, we’re told. Until it does happen.

42 comments for “Will Quant Funds Trigger the Next Stock Market Crash?”