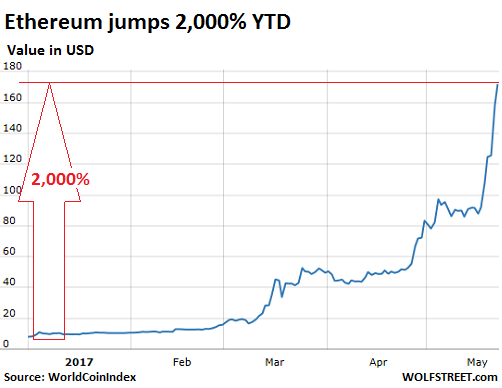 Bitcoin, the largest of the cryptocurrencies, is up 7% today, after soaring all weekend. At $2,211.56 at the moment, Bitcoin has a market capitalization of $36 billion, up from $30 billion a week ago. It has doubled since April 1 and “edged up” – compared to some of the others – a mere 122% year-to-date (chart via WorldCoinIndex): 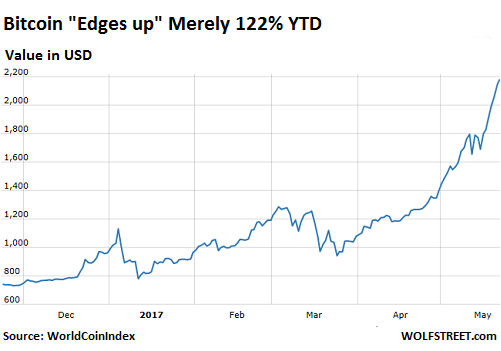 Every one of the 800+ “cryptocurrencies” other than Bitcoin – from the ones that are already dead to the new ones that showed up out of nowhere – are the alt-coins. And there, like with Ethereum, the fun to be had is even greater. 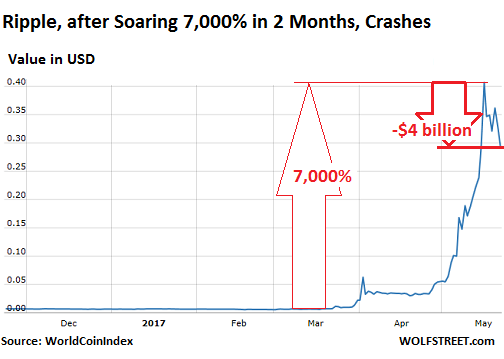 Next largest alt-coin is Gnosis, which came out of nowhere on May 1, after its “initial coin offering” (ICO) – which is like an IPO for stocks but without the legal hoops, disclosures, and registration to jump through – at a price of $30 per token. The ICO raised $12.5 million for someone. Since its ICO, the price jumped 663% in three weeks, to $229 (chart via WorldCoinIndex): 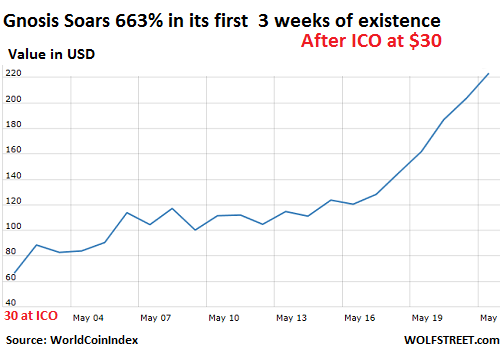 If trading these tokens isn’t quite wild enough, you can also trade derivatives of these tokens. For example, according to BitMex, you might want to trade Gnosis futures. You can even use leverage to put some spice into it:

All margin is posted in Bitcoin, that means traders can go long or short this contract using only Bitcoin. The GNO futures contracts feature a leverage of up to 2x.

For example, to buy 10 Bitcoin worth of contracts, you will only require 5 Bitcoin of Initial Margin.

Is this the embodiment of the new way of wealth creation? Anyone creates a “cryptocurrency,” gets exchanges on board, hypes it, gets other players to pump in actual currency, and participate in this miracle of a digital number backed by nothing and representing nothing, with no coupon payment and no ownership of anything other than the digital token, hoping fervently to sell it back and forth among each other with the agreement to not ever try to convert it back into real currency because that would cause it to collapse – see Ripple.

After these blistering surges of thousands of percent in the shortest time, no one is even trying to pretend that these are usable currencies. That notion has totally fallen by the wayside. They’re not even called “cryptocurrency” anymore. They’re cryptocoins or alt-coins or bitcoins or just tokens.

Of these 800+ schemes, the top ten alone have now ballooned to a combined market cap of $70 billion. That’s a serious amount. Next week it might be $100 billion or $40 billion, whatever the case may be.

They have become the favorite playground of some hedge funds that can with – for them – relatively small amounts of money drive up the price by thousands of percent.

But how do hedge funds get the real currency out of it – the money that they need to distribute to their clients? They’d have to sell their stake for real currency, and then the game is over, because just like their entry causes a huge surge, their exit causes the opposite – the type of event that Ripple might already be experiencing.

The funniest thing is to listen to all the logical sounding pseudo-reasons why this surge has happened, ranging from the impending collapse of the fiat currency, such as the dollar, to getting in on the ground floor of the future, or something.

On a more philosophical basis, these manias make you wonder about the state of the mind of today’s “investors” including hedge funds that play these games with increasingly hefty amounts of money. It’s symptomatic for something larger. But then people also play the lottery, which someone once called a special tax for those who can’t do math. So looking at these cryptocurrencies, I’m not yet predicting that mankind is totally doomed. But it does make me marvel at how so much liquidity for so many years has inflated asset prices all around and to such an extent that the craziness in these cryptocurrencies barely makes a, well, ripple.

123 comments for “Cryptocurrencies Show Just How Nuts Things Have Gotten”