The Fed leads, the ECB follows.

The voices are getting clearer: The ECB will end QE likely this year and begin raising rates possibly as soon as 2019. For now, these are not official announcements, but central bankers talking — not just German central bankers anymore, who have a more hawkish bend to begin with, but now even Francois Villeroy de Galhau, the head of the Bank of France and member of the ECB’s Governing Council.

They’re preparing markets for a new reality, the era of QE Unwind and rising rates. And the end of NIRP. The key word, so effectively etched in stone by the Fed, will be “gradual.”

Villeroy was talking on Monday at a central banker conference by the Global Interdependence Center and the Banque de France in Paris. Cleveland Fed President Loretta Mester also spoke there; more on her speech in a moment. Villeroy was talking to the media too to make sure his message got out.

The ECB’s current QE program is scheduled to run through September. It already tapered its asset purchases from €85 billion a month at the peak in 2016 to €30 billion a month starting in January. It includes an alphabet soup of assets: government bonds (PSPP), corporate bonds (CSPP), asset-backed securities (ABSPP), and covered bonds (CBPP3): 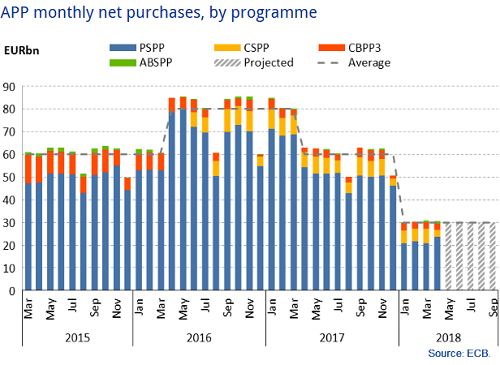 So what everyone wants to know is what happens after September.

In his speech, Villeroy said that “the time when our net asset purchases will end is approaching,” but whether net purchases end in September or December is not “a deep existential question.” But they will end. The last time the ECB tapered, as the chart above shows, it took its purchases from about €60 billion in November 2017 and prior months to €50 billion in December and to €30 billion in January 2018. If this pattern holds, Eurozone QE will drop to zero sometime before the end of December.

And Villeroy added that, as the ECB approaches the end of QE, it will need to adjust its guidance on the “timing” of future rate hikes. These rate hikes are coming. The ECB has consistently said that rate hikes would begin “well past” the end of QE. In his speech, Villeroy defined this phrase, “well past,” as “meaning at least some quarters but not years” after the end of QE. So rate hikes in 2019?

In an interview also on Monday in Paris, Villeroy told Bloomberg that the ECB “will probably give additional guidance for the end of the year for the timing of the rate hike and the contingencies.”

He thus joined other ECB governors who think that the Q1 slowdown in inflation and possibly GDP growth, was “clearly temporary,” after “strong” GDP growth in 2017 with an “acceleration” in the fourth quarter. He said that he expects the underlying price pressures to strengthen, and the current “temporary” slowdown will not cause the ECB to delay its exit from QE.

Interestingly, at the same conference in Paris, Cleveland Fed president Loretta Mester, in her speech, presented a blast from the past:

“Three years ago when I spoke here, … I discussed the Federal Reserve’s plans for normalizing policy and some of the challenges we would face as we transitioned from extraordinary economic and policy times back to ordinary times.”

No one believed her at the time. The Fed would never or could never “normalize” its policy, the meme went. The Fed had painted itself into a corner, they said. But after an initial hiccup, the Fed has been raising its target range for the federal funds rate “gradually” and without missing a beat since late 2016, and it has been ramping up its QE Unwind since late 2017.

Just like QE took six years to pile up $3.5 trillion in assets, and the Taper cut QE down to zero gradually over a year, the ramp-up of the QE unwind will also take a year, and the QE Unwind itself will “take several years to complete,” as Mester said. Everything is gradual.

Mester has been on the forefront of these voices to “normalize” monetary policy, and the Fed kicked this normalization off in earnest in late 2016. Now the ECB is communicating that it will follow the Fed’s procedure: First, taper QE to zero; second, raise rates gradually; third, after a few rate hikes, start the QE unwind. Turns out, central banks have not painted themselves into a corner, and the markets better get used to the idea.