But the crash-insurance policy is a one-time deal. And then what? 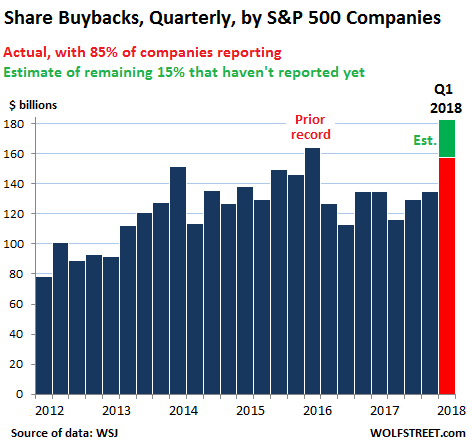 At this trend, including a couple of slower quarters, S&P 500 companies are likely to buy back between $650 billion and $700 billion of their owns shares in 2018. This would handily beat the prior annual record of $572 billion in 2007. Here are the top buyback spenders in Q1:

Buybacks pump up share prices in several ways. One is the pandemic hype and media razzmatazz around the announcements which cause investors and algos to pile into those shares and create buying pressure. Since May 1, when Apple announced mega-buybacks of $100 billion in the future, its shares have surged 11%. The magic words.

Other companies with big share buyback programs have also fared well: Microsoft shares are up 14% year-to-date. And if buybacks don’t push up shares, at least they keep them from falling: Amgen shares are flat year-to-date.

Shares of the 20 biggest buyback spenders in Q1 are up over 5% on average year-to-date, according to the Wall Street Journal, though the S&P 500 has edged up only 2%.

Share buybacks also prop up prices because they create buying pressure by the company itself when it finally does buy the shares. This is the only entity in the market that doesn’t want to buy low. It wants to buy high since it’s trying to manipulate up its own shares. By design, it provides the relentless bid in a market that might want to sell off. The amounts are huge.

Share buybacks have been a godsend in this environment of rising interest rates, sky-high valuations, the QE Unwind with which the Fed is bleeding liquidity out of the market, and antsy investors.

In the first quarter, investors pulled $29.4 billion out of US stock mutual funds and exchanged-traded funds, the most since the sell-off in early 2016, according to a BofAML report, cited by the Wall Street Journal. Retail investors, after the phenomenal Trump spike, have lost their enthusiasm.

A large portion of these buybacks are now funded by corporations’ “overseas” cash. This cash accumulated in overseas entities as a result of profits that thus dodged the old US tax law. This “cash,” while registered overseas, has actually been invested in US Treasuries, US corporate bonds, and other investments in the US and elsewhere. Share repurchases were among the things companies could not do with this “overseas” cash without triggering 39% income tax. Now they can, under the reduced rates of the new tax regime.

Alas, the tax regime was changed under the pretext of encouraging US companies to invest this money in their operations in the US to grow in the US, hire people in the US, and crank up the US economy. Everyone knew this was a pretext for a corporate tax cut that would free companies to do what they’d done during the last “repatriation holiday” in 2004: Buy back their own shares, increase dividends, and jack up executive compensation packages. Ironically, companies that had “brought back” the most cash, ended up laying off the most employees.

With this kind of corporate buying pressure in the market, it’s very hard for shares to crash no matter what else is going on – such as during the record buyback-year 2007 the housing bust, a budding mortgage crisis, and big visible cracks in the banks. In 2018 too, companies will pile into the market at every dip and buy as high as possible. And they’ll be able to prevent their shares from crashing.

This has already played out during the sell-offs this year, when corporate buybacks surged on days when everyone was selling. And it stopped the sell-offs.

Other companies won’t be able to do that and their shares might get thrown under the bus. But the mega-caps such as Apple and Microsoft, solidly lined up behind the buyback binge, will help prop up the broader market. Overall, the S&P 500 may zig-zag lower in 2018, and even share buybacks may not be able to stop it, but it’s unlikely the overall market can crash this year no matter what happens.

But this “overseas” cash is a one-time trove of money. Once it’s used up, it’s gone. Then what?

Then share buybacks will have to be funded by cash flows and borrowing. Cash flows aren’t nearly enough to maintain this buyback pace, and borrowing is getting increasingly expensive, and corporations are already burdened by a record amount of debt. The Fed’s QE Unwind, which is currently ramping up, will drain up to $600 billion a year in liquidity out of the market in 2019 and later years, when share buybacks funded by “overseas” cash, which were able to counteract the early effects of the Fed’s liquidity drain, will begin to fade out. This gradual transition is one of several reasons why I think that in the near future this market cannot crash — say, a 50% decline over a relatively short period of time — but that it will instead zig-zag lower, and that this process could last many years before the excesses have been wrung out of the market.

And these are getting to be serious amounts. Read… Fed’s QE Unwind Accelerates Sharply