The LIBOR (London Interbank Offered Rate) was essentially designed to be conveniently rigged for the profit of those rigging it. And so it was widely rigged, as we found out during the “LIBOR Scandal,” in which some of the biggest and most notorious banks had gotten tangled up. Some criminal charges were brought against low-level traders, and some fat fines were levied against the banks.

But the big thing that came out of the scandal was the realization: LIBOR, crucial to the credit-based economy and to hundreds of trillions of dollars in derivatives, had to go.

LIBOR is an average interest rate based on submissions by major banks of what they expect to pay if they borrowed from other banks across the world. There are different LIBORs for different currencies and durations. LIBOR is not based on actual transactions between banks, but on their opinions of what it would cost to borrow from each other. Hence the invitation to rig.

But LIBOR isn’t easy to replace all in one fell swoop. In the US, the Alternative Reference Rate Committee (ARRC), which was put in charge of finding a replacement for the dollar LIBOR, said in March that dollar LIBOR underpins $200 trillion in derivatives and loans. This was 25% more than previous estimates. Derivatives account for about 95% of the $200 trillion.

And yet, despite this gargantuan amount that is based on the dollar LIBOR, actual borrowing between all commercial banks has plunged from nearly $500 billion at the peak before and during the Financial Crisis to just $68 billion in February, when the St. Louis Fed stopped updating the data as interbank loans have become an irrelevant indicator of anything other than that banks are awash in cash and don’t need to borrow from each other: 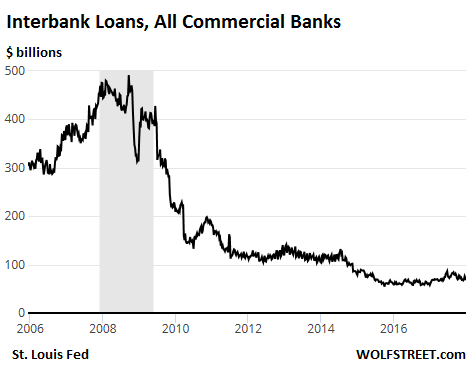 ARRC decided last June that the SOFR (Secured Overnight Financing Rate) would be the replacement for the dollar LIBOR. And today was the first day that the New York Fed, in cooperation with the US Office of Financial Research, published the first SOFR.

But LIBOR-based rates are written into the contracts of these $200 trillion in derivatives and loans currently outstanding. So LIBOR isn’t going away today, but will phase out gradually. And SOFR has got a big job ahead.

The [SOFR] is a broad measure of the cost of borrowing cash overnight collateralized by Treasury securities. The SOFR includes all trades in the Broad General Collateral Rate plus bilateral Treasury repurchase agreement (repo) transactions cleared through the Delivery-versus-Payment (DVP) service offered by the Fixed Income Clearing Corporation (FICC), which is filtered to remove a portion of transactions considered “specials.”

The SOFR is calculated as a volume-weighted median of transaction-level tri-party repo data collected from the Bank of New York Mellon (BNYM) as well as GCF Repo transaction data and data on bilateral Treasury repo transactions cleared through FICC’s DVP service, which are obtained from DTCC Solutions LLC, an affiliate of the Depository Trust & Clearing Corporation. Each business day, the New York Fed publishes the SOFR on the New York Fed website at approximately 8:00 a.m.

Additional technical explanations on how SOFR is calculated, other links, and data are here. The NY Fed notes that “transactions to which a Federal Reserve Bank is a counterparty are excluded from all three rates.”

This morning’s rate, the first one, is based on $849 billion in overnight transactions from April 1 to April 2. So unlike LIBOR, this rate is based on hundreds of billions of dollars in actual transactions, and not on opinions of what the rate might be. And that rate is – massive drum roll please – 1.80%. The chart, since it only covers the first day, shows a straight line. Over time, the line will become jagged: 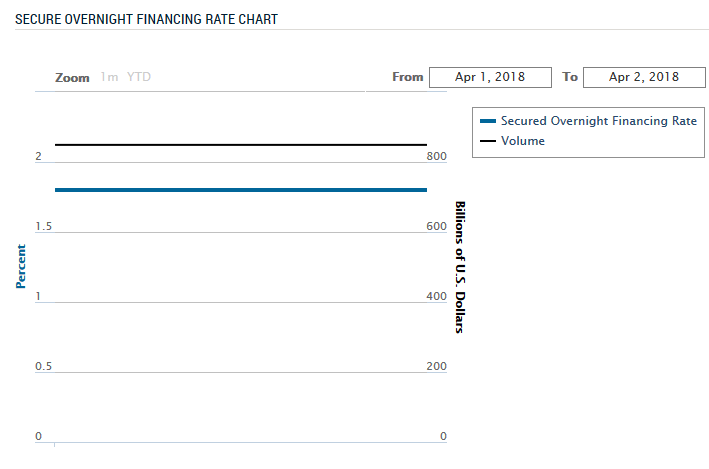 The other two rates…

The New York Fed has also started producing and publishing two other rates:

Today, on its first day to be published, the rate, based on $362 billion in transactions, is – somewhat less drum roll please – 1.77%.

On its first day of making a public appearance, the rate, based on $329 billion in transaction, is – some drum roll please, but don’t overdo it – 1.77%.

Other than being much harder to rig, an additional good thing about SOFR, given how much it will be used in daily finance speak over decades to come – including in mundane things like credit lines – is that it’s an easily pronounceable acronym. However, BGCR and TGCR remain vowel-less tongue twisters.

What will finally pull the rug out from under the dollar’s hegemony? The euro? The Chinese yuan? Cryptocurrencies? The Greek drachma? Whatever it will be, and however fervently the death-of-the-dollar folks might wish for it, it’s not happening at the moment. Read…  What Could Dethrone the Dollar as Top Reserve Currency?

43 comments for “The Dollar LIBOR Replacement Rate Has Arrived: 1.80%”